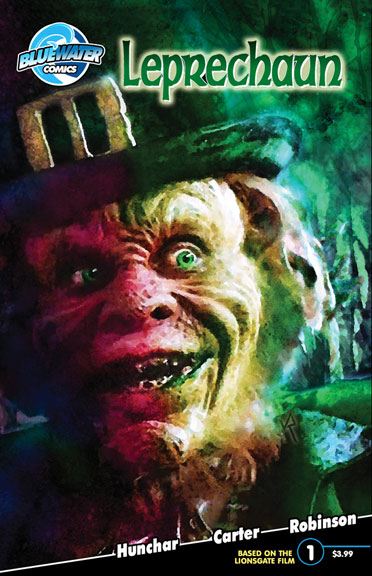 BELLINGHAM, WAâ€” October 27, 2008â€” in 2009, Bluewater and Lionsgate will be developing a line of comic books based on the cult/ horror favorite films â€œLeprechaunâ€ and â€œWarlockâ€.Â  After their successful series â€œVincent Price Presentsâ€ Bluewater delivers more horror to comics.

â€œWorking with Lionsgate on this end is like coming back full circle for me.Â  I worked on the marketing for â€œLeprechaun 4: In Spaceâ€, said Bluewater publisher Darren G. Davis. â€œI loved this little character and have always wanted to do something with him.Â  As for â€œWarlockâ€, this was another cult film that I enjoyed, so having this opportunity to partner with Lionsgate again is going to greatâ€.

The â€œWarlock comic series is described as, The Warlock is on a mission to destroy a book that contains a spell which imprisoned six other Warlocks. If the book manages to be destroyed, the dangerous Warlocks would be released back into the world free to cause chaos and destruction. It’s up to a rag-tag group of people to prevent the Warlock from carrying out his plan.

“Warlock will appeal to both fans of the franchise and readers who know nothing about the horror seriesâ€, said writer Nick Lyons.Â  The book will be drawn by Jacob Bear and colored by John Hunt.Â  Matt Bellisle will be doing all the alternate covers to this title.

â€œLeprechaunâ€ will be written by another Lionsgate alum Zach Hunchar, who just finished writing Insane Jane for Bluewater.Â Â  â€œLeprechaunâ€ is an immensely popular horror franchise and Iâ€™m excited about expanding the mythos. It takes two of my favorite things â€¦ Ireland and horror. Iâ€™m extremely excited to continue to explore the things that scare me and entertain me. Iâ€™m very happy Bluewater chose me for this task.â€

â€œLeprechaunâ€ the comic series is a tale of revenge and mayhem. This is the tale of Lubdan, the king and sole survivor of the Leprechaun. The last of the Leprechauns! A treasure dealer stumbles across his pot of gold and steals it. In this modern age, he finds buyers all over the planet through on-line auctions. Iubdan finds the thief after the gold is shipped to humans across the globe. Unbeknownst to Iubdan, the Cluracan, a war-like race intent on genocide, helped the human find the gold. A new curse is discovered that weakens Iubdan while he is not in possession of the gold and will eventually kill him if he does not recover them all in enough time. He quickly realizes he cannot locate the gold without help. The treasure dealerâ€™s last sale was to a computer expert, who agrees to help Lubdan, in exchange for his life. Together, they race against time to learn of the goldâ€™s locations. Lubdanâ€™s quest takes him all over the planet, across time and space. Battling greed, the genocidal Cluracan and new mystical adversaries, Lubdan must save all life to save himself.

Kris Carter will draw â€œLeprechaunâ€. And Micheal Kingston will be writing the 2nd story arc.