By Stephen Schleicher on October 8, 2008 6 Comments 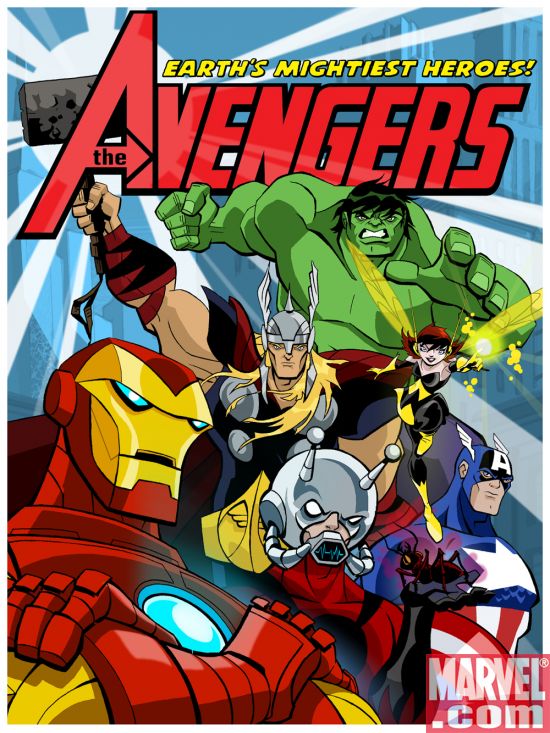 That’s the battle cry heard over at Film Roman, the animation house famous for The Simpsons, King of the Hill, Rugrats and others, as Marvel Animation announced it is beginning production of The Avengers: Earth’s Mightiest Heroes.

The animated television series is the latest from the House of Ideas, who has previously announced Wolverine and the X-Men, and Iron Man: Armored Adventures.Â  The 26 episode Avengers series is expected to debut in 2011, at or around the same time as Captain America: The First Avenger and The Avengers movies hit theaters.

“(This) continues our plan to complement each of our tentpole live-action features with an animated series,” said Marvel president of animation Eric Rollman, who is exec producing with Simon Philips. “This new ensemble series tracks perfectly with our ‘Road to the Avengers’ strategy.”

The good news from all of this is Film Roman isn’t a company to dick around on an animated series, and should deliver something that is quite good, unlike that god-awful Fantastic Four series that ran a few years ago.

The new series, expected to be available for broadcast in 2011, continues on Marvelâ€™s already impressiveÂ  television line-up which includes the all-new Wolverine and the X-Men and Iron Man: Armored Adventures series that will both debut on Nicktoons in 2009.Â  Marvel Animation will also debut the all-new series Marvel Super Hero Squad and The Black Panther next year.

THE AVENGERS: Earthâ€™s Mightiest Heroes is an all-new property featuring some of Marvelâ€™s all-time favorite characters including Iron Man, Hulk, Captain America, Thor, Giant Man and Wasp.Â  When the planet is threatened by Super Villains, time traveling conquerors, alien invaders, mythical monsters and mad robots bent on the total destruction of humanity, when forces of evil are so overwhelming that no single hero has the power to save the world, when there is no hope leftâ€¦the Avengers assemble!

The Avengers are the best of the best in the Marvel Universe and the greatest heroes who take on the most unbeatable foes.Â  These are the heroes who hold back the storm, and the fate of the world rests on their shoulders.

“The addition of THE AVENGERS: Earthâ€™s Mightiest Heroes to our quickly expanding animation slate continues our plan to complement each of our tentpole live action features with an animated series,” said Eric Rollman, President of Animation.Â  “This new ensemble series tracks perfectly with our highly anticipated â€˜road to the Avengersâ€™ strategy which includes some of Marvelâ€™s biggest and most beloved characters, and which kicks off with two Avengersâ€™ themed feature films in summer 2011.â€