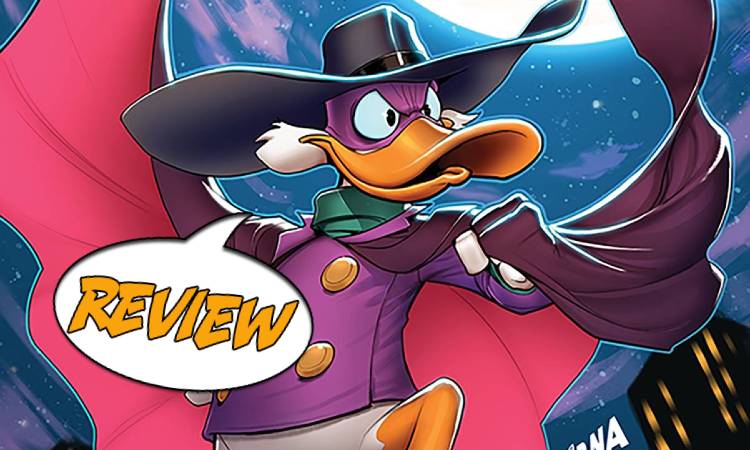 He is the terror that flaps in the night! He is the mallard that shows no mercy! Your Major Spoilers review of Darkwing Duck #1 from Dynamite Entertainment awaits!

Previously in Darkwing Duck: He is the terror that flaps in the night…He is the ferocious fowl who plucks the evil eye from the face of foul play…He is Darkwing Duck! Alongside his trusty sidekick Lauchpad McQuack, Darkwing hyper-vigilantly defends St. Canard from the dastardly, devilish demons who would wage wanton war!

FINALLY GETTING THE HONORS HE DESERVES

As we open, Drake Mallard’s masked alter-ego is on a shadowy rooftop, preparing to once more swoop out of the shadows, but instead of busting a crime, he’s attending the dedication of a statue in both his likeness and his honor! His daughter Gosalyn laments that she doesn’t have a cell phone to record the proceedings, but when Megawatt arrives, even she can’t complain. The villain uses the audience members’ phones to take over their minds, forcing Darkwing and Launchpad to flee. When a massive electrical burst wipes out the avionics in the Thunderquack, our hero has to improvise, pulling off an amazing save… that no one sees because they’re all mesmerized. But when Gosalyn is targeted by the villain, his masked vigilante gig and his dad role cross over!

After the success of the 2011 Darkwing Duck series, I had some high hopes for this issue, even though I wasn’t sure what I would get. This issue isn’t quite the Disney Afternoon series of thirty years ago, nor is it the comic-savvy riff-fest of the previous book. Instead, it’s somewhere in-between, mixing a traditional cartoony adventure with something more metatextual. Gosalyn’s plan to draw out the villain involves posing as a rock group, but the song they play is the theme from the cartoon. (Megavolt even comments on how catchy it is.) The costume change in that sequence is impressive as well, keeping Gos and Honker recognizable while disguised, part of the issue’s great success in the art. Lauro manages to balance out comic-style storytelling and the cartoon’s aesthetic, which can be very hard to do, but there’s never a point where the visuals slide entirely off the rails. The end of the story does feel a tiny bit abrupt, but that may also be because of the amount of explication necessary because of the first issue status.

All in all, Darkwing Duck #1 has a hard row to how, but does so with style and grace, giving us a new story with modern trappings, a lot of metatextual moments, and some lovely art, combining for a better-than-average 3 out of 5 stars overall. It’s definitely aimed at a younger audience, but the creative team clearly has the skill to make it all work.

It's remarkably good at capturing the tone of DW's cartoon adventures, with a few fun in-jokes and Easter eggs and art that stays on-model.