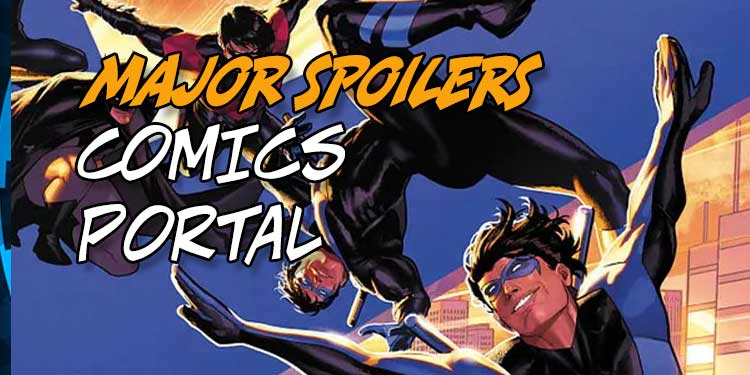 Last week, two comics came out that reminded me exactly why I read them! I often get asked just what it is about comic books that attracts my attention so much! I tell people that the characters and the situations they find themselves in really appeal to me!

A comedian once said he doesn’t like to go to movies about relationships! “I have those!” he said. “Now, an alien living under my front porch? I do NOT have one of those, so I’m interested in that!”

I concur with that perspective!

I’m particularly a DC fan because I like the more heroic, more spectacular characters I can admire there. In Marvel, Spider-Man has trouble paying his rent, Sue Storm has a bad hair day, and Spidey also gets a cold.

Hey, I deal with a lot of that kind of thing every day! I don’t need to read about them!

However, a rich guy who goes around at night protecting people from bad guys—now THAT I like to read about! I don’t have that in my life!

This also heightens the drama in certain situations. Also, a lot of the heroes I admire, admittedly, are guys, and we don’t handle emotions and other kinds of things all that well. It ramps up what happens when a comics hero makes things along those lines happen.

This week, I saw two great examples of that! A word of warning, though—if you haven’t read either of these books, there be spoilers ahead so act accordingly! I just wrote a whole column about Dick Grayson and his alter ego last week, so I won’t go over that ground again. However, there was one particular moment that touched me very strongly.

You could actually say it was two moments, though! First Dick actually HUGGED Bruce after the latter began to apologize for how he believe he has failed his ward. Dick replies that “You NEVER failed me!” A touching enough moment, but then Dick does something he has never done before.

I got all choked up! Congrats to Tom Taylor for making a milestone comic that truly delivered on all cylinders, including going where the characters SHOULD have gone before and finally did!

I still tear up just thinking about it! I notice that both of these happenings have to do with Batman, so maybe his involvement upped the ante for me.

In this issue, the Key has manipulated the heroes into a deadly situation. David, who is called the Boy Thunder and is from another universe with Superman-level powers, has been programmed not to be able to move when a specific keyword is said. The Key says it, and that renders David helpless.

That’s bad enough, but the Key has also temporarily removed Superman’s powers, so when the Key threatens David with “the most powerful weapon” in his arsenal, one that can completely destroy him, Superman and Robin are unable to stop him.

The Key says, “You are next,” and follows up with something that hit me hard as a reader. He taunts, “You’re Superman. How can you know anything about loss? Well… THIS is what it feels like!” as he is about to pull the trigger, pointing the weapon directly into David’s chest.

Superman cries out, “NO!”

Out of the shadows comes Batman, who kicks the Key in the jaw while saying, “‘No’ is RIGHT!”

I cheered! I pumped my fist! It is a comics moment I will ALWAYS remember!

Maybe it’s just that I have read Batman and Superman stories for decades now. Either that or I can tip my hat to Mark Waid’s writing in World’s Finest and Tom Taylor’s scripting in Nightwing.

They just got to me.

And the next person who asks me why I read comics is going to hear at least these two examples from me.

Now, were those two the only good moments in those comics? Absolutely not! I could list several other times that I loved, including the phrase, “Superman never lies!” But you have to read the book to find out about that one!

The sad thing for me is, as much as I love this excellent writing and can recognize it as such, I can’t do that myself! All I can do is point out how great it is when it happens!

I want to give a big WELL DONE to the creative teams on both books! I still feel those emotions when I think or write about them! If DC can, please give them all a bonus, okay?

I wish I could say that this level of writing happens each week. Sorry, but it doesn’t. That’s why I cherish moments like these! But they still do take place, and when they do, I’ll add them to the list of reasons I give when I’m asked why I love comics.

Thanks so much, folks!

What do you think? What moments in comics have stood out to you? How often do they happen in the comics you buy? If they don’t take place in a while, do you drop the book or keep it on your subscription list? Whatever your opinions, be sure to share your thoughts below!