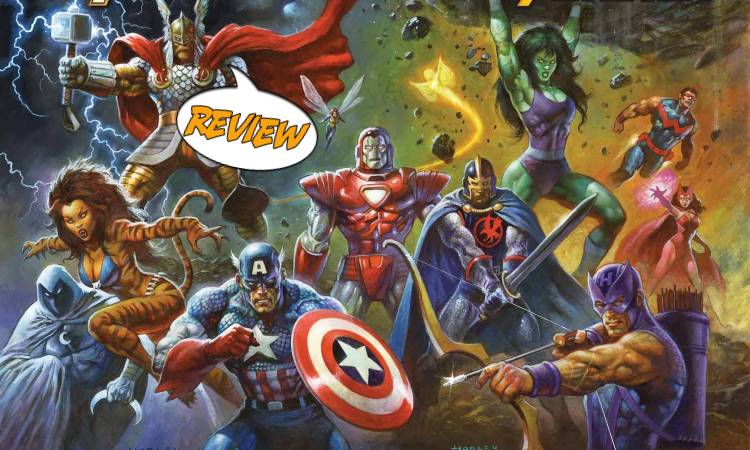 What is the secret of Avenger Prime? Your Major Spoilers review of Avengers Forever #13 from Marvel Comics awaits!

Previously in Avengers Forever: King Thor’s granddaughters have come from the far future to join the fight for Infinity’s End, and they’ve brought a fiery old friend with them in the form of the most powerful version of Wolverine who’s ever existed. Plus, Doom Supreme’s grand plan begins to unfold. And at last, the true identity of the mysterious Avenger Prime is revealed.

This issue opens with what I think is a flashback, but then again, the Phoenix Force is a timeless cosmic entity, so it may well have been next Thursday, as a Wolverine and a Mystique battle it out for control. Though she wins out, cutting him to pieces and flinging him to the four winds, she forgets one thing about Wolverines: They always heal. With the help of the Goddesses of Thunder, Old Man Phoenix arrives at the God Quarry in time to turn the tide… for a moment. That’s when The Doom Above All attacks with his own army of Dooms! Of course, this is an Avengers story, so last-second saves are the order of the day, leading to the reveal of Avenger Prime, the man who has spent centuries hiding at the end of the universe awaiting this day. Having escaped death at the hands of the Mephistos, he finally removes his helmet and tells the assembled Avengers who he really is.

And yes, it’s a shocker.

As the Avengers Assembled crossover has progressed, it’s become more and more clear that Aaron has thought about the pitfalls of the form. That’s not to say that the crossover has been without stumbles, as this issue doesn’t really pay off on everything that happened last issue. (Captain Carter and her Howling Captains America and the Carol Corps end up just being cameos, while the sudden centering of The Thorsdotters brings up the spectre of creator’s pet.) That said, I enjoy the overall effect of this comic more than the specifics of the plotting. The Old Man Logan reveal is nicely handled and beautifully drawn, and the final page reveal is worth the price of admission by itself. Kuder and company make even the horrific sight of Mangog dragging a severed head look truly amazing, and a sequence involving a storm of hammers may be the action sequence high point of the entire crossover.

With five chapters left after Avengers Forever #13, Aaron’s swan song on The Avengers, we get an above-average story with remarkable art and a killer reveal that actually makes perfect sense, winding up to 4 out of 5 stars overall. I don’t expect that this issue will change the minds of anyone who doesn’t like Jason Aaron’s bombastic, broad-strokes style, but if you’ve been following and enjoying this volume, this will be your jam, especially once it’s collected with the other issues.

There's a little bit of "Middle Chapter Syndrome" going on, but the Avenger Prime reveal hits pretty hard and the interactions of the Avengers army are such fun.