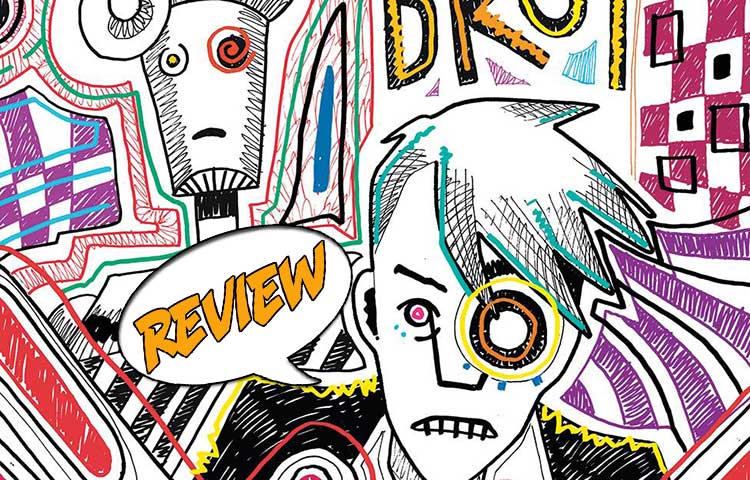 Director Breslin recovers from her trip into the world of the painting even as another incident occurs, also associated with the winking face. Can so many disparate events really be connected? Find out more in Art Brut #2 from Image Comics!

Previously in Art Brut: A tour in the Louvre seems normal until they reach the Mona Lisa, and the famous painting is now winking. Director Breslin of the Bureau of Artistic Integrity goes to a psychiatric hospital to meet Arthur Brut. He paints to keep his mind clear, and she explains the case. This is not the only instance where art and a winking face have been involved, and several people have become sick. Another story thread follows a young boy whose mother is driving him to a special facility. They pass a field of cows. He draws cows but with X’s for eyes. After they pass, the cows are all dead. Arthur goes to the Louvre and starts to examine the Mona Lisa when a group of armed men, all wearing eye patches, arrives and starts shooting. He grabs Breslin and they flee – into the Mona Lisa!

Art Brut #2 is every bit as surreal as the first issue. The story is no longer within the painting, so some time has passed. As the story progresses, it will show us that past, but the information is revealed gradually. The issue opens with Breslin starting out her day with a shower. The water gradually changes to paint in all colors and the flow increases to a torrent. Breslin is washed away until she awakens with a gasp, at home, and in bed with her girlfriend.

The scene shifts. Breslin admires her girlfriend Inny’s latest painting, a monochromatic piece she calls, “A Study in Vision.” Breslin loves it, but it has been rejected from several galleries so far. Breslin is encouraging, but when she goes to her computer, she thinks about how everything seems different somehow. Food tastes bland. The colors are less vibrant. She has problems sleeping. She looks at a copy of the winking face symbol and tries to make sense of what happened.

The previous day, she was taken into the Mona Lisa. Art Brut seemed much saner, and his mannequin turned into his tall partner, Manny. They walk through a world of arches, of planters, of colors and textures, of black birds. This is the world behind the painting, or within the painting, the place where inspiration derives, but Art Brut can feel that something is terribly wrong.

Their speech turns to intelligible beeping and buzzing, and Breslin realizes her phone is ringing. There has been another incident, this time in an art class. She enters the scene to find it full of blood and dead bodies – and several winking faces drawn in blood upon the walls. There is one survivor. Ms. Walker is an accountant who was taking this free class to do something different. On this day, they had a substitute teacher, and she had a bad feeling about him. He put a painting on the easel and told the class that Matisse had said painters had to begin by cutting out their tongues – and everyone is class except Ms. Walker did so. The substitute teacher, she said, resembled Andy Warhol, like the man we saw last issue.

In the world of art, Breslin wants to get back to the real world. Their attacker at the Louvre was dressed like Warhol. Art Brut tells her that the group is called The Correction. Their conversation is halted as they come face to face with a large blob with tiny wings, an art tumor. Art Brut takes it on, armed only with his paintbrush. They find a door which leads them back to the world through Inny’s latest painting.

Breslin arrives home with groceries and Inny tells her their guest, Art Brut, has finally woken up. He is desperate for painting supplies. And remember the boy from last issue? An examiner shows him pictures and asks him what he sees.

While this concludes the main issue, there is also another story of the past adventures of Art Brut. It is charming and clever, besides giving us a look at his more carefree past, before the world behind the art took its toll.

I enjoy the art of Art Brut #2. The opening scene is terrific. Taking a shower is so mundane, and we feel just how rote it is. The colors that first creep in are red and purple, and in a book dealing with death already, it is hard not to think of blood. Then the blues and greens arrive, and the paint begins to ooze from out of the tiles as well as the shower, viscous enough that the colors do not blend. It feels like we are being reminded that art has its own life that is bigger than we could imagine.

I like the contrast between the real world and the world behind the art. The real world is drawn with a very clean line and geometric shapes. We live in world of regular, symmetrical constructions. Apartments, windows, shelves all have clean, regular lines. These scenes also have a limited color palette that fits the setting. But when we go to the other world, inside the Mona Lisa especially, the forms inspired by the painting take on an organic shape behind the scenes. Around the edges, shapes like arches start losing some of their blocks and looking surreal. By the time we reach the tumor, the scenery has shifted into something that looks more like Escher. Add to that the broader color palette and we feel how different this place is.

There is no doubt that Art Brut #2 continues to be an unusual story, but it fascinates. We do not yet see all the connections clearly, but as with a puzzle, the more pieces we can work with, the more we can figure out.

Breslin tries to come to terms with her time within the painting even as she must investigate another art situation.