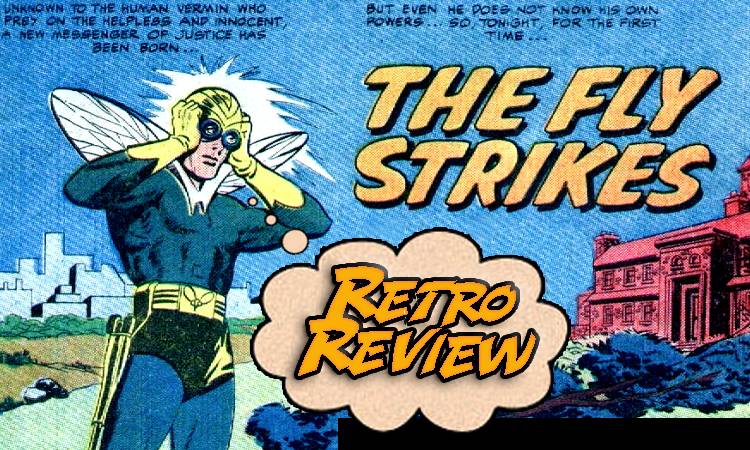 In 2023, most people don’t think of superhero comics when they think of Archie Comics. But at the dawn of the Silver Age, that wasn’t necessarily the case. Your Major Spoilers Retro Review of The Fly #1 awaits! Previously in The Fly: Debuting at the dawn of comics’ Golden Age in 1939, MLJ Comics was responsible for some of the very first post-Superman heroes in history. By the mid-’50s, though, the bloom was well off the rose of superhero comics and MLJ had rebranded itself after its most famous character, Archie Andrews. A few new superheroes were popping up here and there, with Captain Flash, Martian Manhunter, Marvel Boy, and a few others testing the waters for the return of the capes and tights that disappeared after WWII. One such attempt from Prize Comics, was Fighting American, a book that presaged modern characters like Daredevil and Harley Quinn, as well as the camp craze that would overwhelm comics in the following decade. The creators of Fighting American, were Joe Simon and Jack Kirby, a pair of revolutionary creators whose work over the previous decade was always noteworthy. Among other achievements, they pioneered romance comics, founded their own publishing line, and worked for all the major publishers of the day.

Then, they created… The Fly! A ward of the Westwood Orphanage for Boys, young Tommy Troy stumbles on a criminal conspiracy wherein the headmaster has been embezzling funds for illegal gambling operations. Once caught, he is sent to work for a local couple believed to be warlocks, where he finds an unusual ring that summons something even stranger than a wizard! He calls himself Turan and claims to be an emissary of “The Fly People” an extradimensional race who now only exist as three-dimensional projections of insects in OUR dimension. It’s… confusing? Still, the artwork shows off Kirby’s strengths as a draftsman, giving us the kind of layouts and character design that would, within a few years, be the backbone of the Marvel Universe. I don’t know if I can blame colorist Sam Rosen so much as Archie/MLJ’s production process, but every copy of this issue that I’ve ever read or graded is a muddy, yellow-green morass. I have trouble telling whether The Fly’s costume is meant to be green or blue, but the basics of his look are pretty amazing. It must be said that Kirby’s more note-worthy insect guy, Ant-Man, has never had a costume that looks as cool on the page as Tommy’s. Breaking up the racket that is oppressing his fellow orphans, The Fly suddenly realizes that he doesn’t know how to turn back to normal! Fortunately, Turan is still ready to assist him.

Tommy’s co-existence with Fly is quite obvious based on Fawcett Comics’ Captain Marvel, who had ceased publishing in ’53, but the story of his origin is quick and dirty and full of questions that I’m not sure Simon or Kirby really gave a damn about. After a short story where The Fly tests out his Buzzgun (it’s honestly pretty dull stuff), we get the moment so exciting that it got a bright-red blurb on the debut cover: THE WIDE-ANGLE SCREAM!

I will admit, it’s a lovely double-page spread of The Fly facing off with the nefarious Spider Spry, showing off Kirby’s remarkable ahead-of-their-time layouts well. Then again, the story that it is introducing is as bizarre and underdeveloped as the first tale in the issue, with the beating of a young boy as a running joke. It’s not as odd as the next story, billed as a “Short Feature” in two pages. In fact, it’s an ad for The Double Life of Private Strong, another Simon and Kirby joint, the first issue of which had debuted a few weeks before. Private Strong’s book was ended by legal action from DC over their dark-haired, bulletproof hero in red and blue, but as for The Fly #1 (though the cover says The Adventures of The Fly, that title doesn’t appear in the legal indicia until #7, by which time Simon, Kirby, and the original premise are all gone), it’s not the best of S&K’s collaborations, earning 2.5 out of 5 stars overall. Some years later, Simon revealed that The Fly was reworked from a proposal he created for Harvey Comics where Tommy Troy was a hero called The Silver Spider, making me wonder if this book was quickly cobbled together out of existing scraps of material, because (some really good artwork aside), it does feel like it.

Simon and Kirby's teen hero kicks things off with an exciting origin, but most of the issue just doesn't have the joie de vivre of their other work of the era.