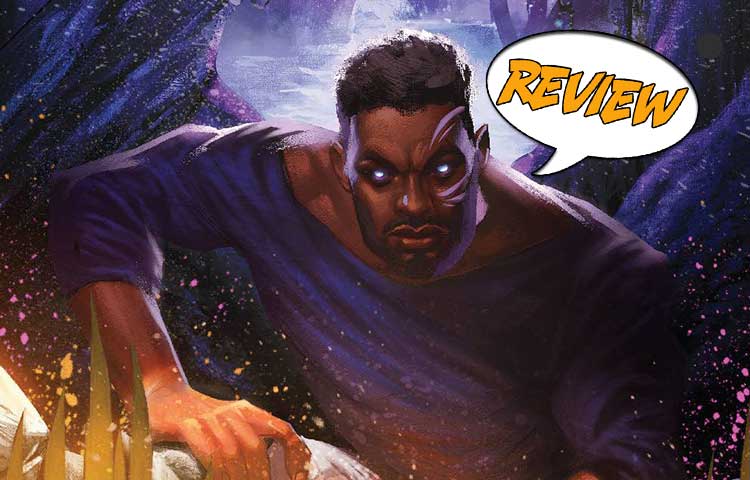 Jace Boucher has established a life of his own, saving kids from monsters and helping them recover. But what happens when a kid runs off near the territory of his old House? Find out in House of Slaughter #11 from BOOM! Studios.

Previously in House of Slaughter: Jace Boucher, a White Mask from the Maison du Boucher was being hunted by Aaron Slaughter, his boyfriend. Aaron did not kill him, and Jace shared his new secret. He was on his own. He saved children from monsters and had a camp made up of the survivors he had rescued.

House of Slaughter #11 opens in a Louisiana bayou where a school bus has slipped into the swampy waters. An alligator approaches the open door, which has sunk to water level. But this is no ordinary alligator. It soon becomes apparent that it is a monster. One little boy, Sunny, survives when Jace Boucher pulls him free and kills the monster. The scene changes and we see that Sunny is telling his story enthusiastically around a campfire to a group of kids who all appear to be injured. He claims Jace offered to make him a monster hunter too.

Jace himself appears and reminds the children of the rules – no weapons, no hunting, and no scary stories. Scary stories, as we know, may generate monsters. But Sunny cannot seem to control himself. His story is cool, and Jace is his hero. The next morning, Jace awakes from a nightmare to find Sunny peeking in his tent. Sunny apologizes for startling him, and for telling stories. He also explains that he just cannot seem to help himself.

Jace sends Sunny off to breakfast, then he must rescue his totems, Hootie and Scar, from the kids playing with them as though they are only toys. He talks with them, and Scar informs him no monsters are in his immediate area. Hootie reports that Aaron is doing okay. They also warn him that he is getting close to Butcher territory. Jace starts chopping wood and recalls his childhood when his parents send him and a bunch of other children out to find and save children. On the streets, he finds a young red-headed girl with mixed color eyes named Jolie. Then an adult Aaron appears in his memory, accusing Boucher of using children to do their recruiting. He is not a father or a savior; he is a weapon.

Perhaps this was another nightmare, because he awakens, sees a shadow with one of his daggers, and jumps on it. It’s Sunny. In frustration, Jace yells at him. Sunny runs off into the woods and Jace follows. He is attacked by a monster before Jace can reach him.

THE RISE OF A MONSTER

The art of House of Slaughter #11 is terrific. It opens with the school bus. The setting is dark with murky colors except the trail of red floating out from the door of the bus and into the murky waters of the bayou. This is the trail that attracts the monster. It is horrifying enough to imagine an alligator clambering aboard a bus, but having it become even more monstrous is downright nightmare-fodder. Sunny is grabbed. Disoriented, he does not realize that Jace has come upon the scene until the monster is gone. The drama is fabulous.

I do like the scene of Jace’s childhood. It is amazing how a few short panels can communicate some major differences between Slaughter and Boucher. In both cases, White Masks are pack hunters. But in this book, the White Masks in training are literally a group of children who are overseen by adults. We get a strong sense of family, which is reflected in Jace’s independent rescue camp that he has established. His memory of finding Jolie does not feel full of terror and desperation. It feels invigorating, and he greets Jolie as a friend. The character of this house is in such contrast to the coldness we have previously seen with Slaughter.

BOTTOM LINE: A NEW ANGLE ON THE HUNT

House of Slaughter #11 continues Jace’s story and gives us the opportunity to see how another member house of the Order of St. George can follow the same rules yet do so with an entirely different flavor.

Jace Boucher is busy protecting orphans he has rescued, but one of them may be more work than he expected.