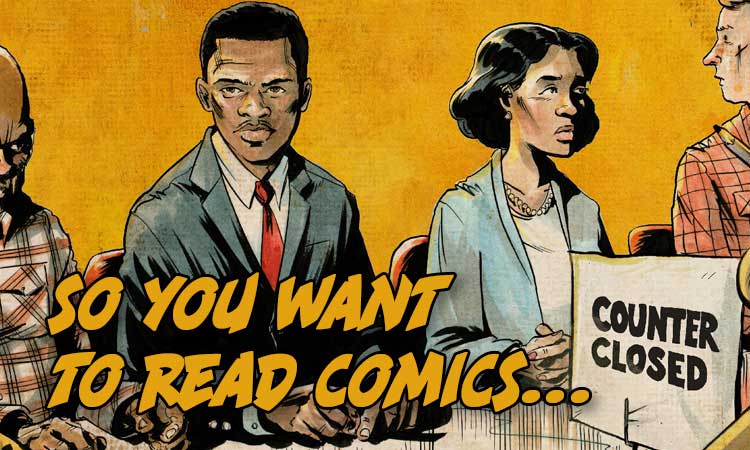 So You Want To Read Comics: The Civil Rights Movement

We’re looking at a pivotal moment in history with this week’s “So You Want To Read Comics”.  This is our weekly feature where we take a look at a single topic or genre, then give you two comic book recommendations, perfect for new readers, based on that topic or genre.  This week we’re looking at comics tied to The Civil Rights Movement.

The fight for equal civil rights for all people is an ongoing struggle, but for the sake of this feature, we’re looking at the period of time between 1954-1968 in the United States.  It’s this period of time where societal and political movements rose to combat the ongoing systemic racism and discrimination that has plagued The United States since its inception and then amplified post-Civil War.  This time period is marked by great civil rights leaders like Martin Luther King Jr. and non-violent acts of civil disobedience like The Montgomery Bus Boycott and many sit-ins that brought the subject of Civil Rights to the forefront of the nation’s awareness.  While this era is also marked by tragedies like the assassination of Martin Luther King Jr. and Malcolm X, it did ultimately lead to the largest advancement in civil rights in the United States since the Emancipation Proclamation.  This time has been immortalized in many pieces of pop culture, including comic books.

Here are a couple of comic book series that help shed light on this time period in ways only comic books can.

March is an autobiographical work from the late Representative John Lewis.  This graphic novel shows both the lead up to and the start of the Civil Rights Movement from his perspective as he goes from being a young minister in Georgia to becoming one of the major Civil Rights organizers at the time.  This graphic novel does a great job of adding a personal touch to depicting the events that happened, making them feel far more real than how they are typically shown in text books and other educational materials.  It also doesn’t shy away from the brutality and violence that those fighting for Civil Rights endured at the hands of other citizens as well as policemen acting on behalf of the government.  This graphic novel is followed up by two subsequent books March: Book 2 and Run, which further explore the fight for equality and the “good trouble” that John Lewis became known for.

While this story technically takes place prior to The Civil Rights Movement, it’s still an example of how comics and the popularity of the characters that inhabit them can have on the real world.  This graphic novel is based on a Superman radio drama from the 40s that had a real world impact on exposing the disgusting nature of the Ku Klux Klan, and began to shed a light on the plight facing many minorities in the country.  While the original radio drama centered around Superman helping an African American family, this retelling focuses on a Chinese immigrant family as they try to settle into Metropolis but are terrorized by the KKK.  What this graphic novel really succeeds at is showing how the fight for equality doesn’t end.  While the events take place in the 40s, it was written in the 2010s and according to the creator was done due to a resurgence in the KKK’s ideals.

What did you think of these recommendations?  Do you have any of your own?  Let us know in the comments section below.