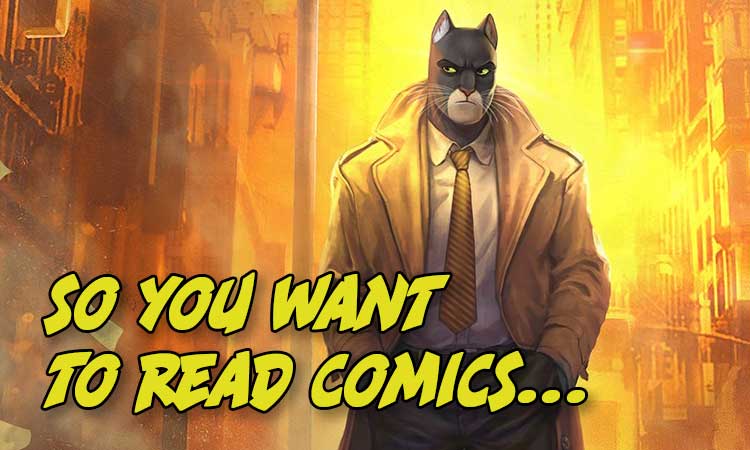 So You Want To Read Comics: Cat Lover Edition

We got nine lives with this week’s “So You Want To Read Comics.”  This is our weekly feature where we take a look at a single topic or genre, then give you two comic book recommendations,  perfect for new readers, based on that topic or genre.  This week we’re looking at comics for cat lovers.

A while ago we took a look at comics for dog lovers, so it’s only fair that we take a look at some graphic novels perfect for lovers of the 2nd most popular pet in the world.  According to the American Veterinary Medical Association,  over 25% of all American households include a cat, totaling over 58 million cats being considered pets.  There are many theories regarding why humans began the process of domesticating cats, or exactly which party started the process.  Most of these are some variation of, cats wanting warmth and humans wanting something cuddly that also killed pests.  But along the way cats have developed a reputation for being mischievous troublemakers, benevolent yet sinister gods,  loving balls of fluff, and everything in between.  And, it’s this varied reputation that has led to cats being utilized in popular culture and entertainment as much as they’ve been.  From a particular orange cat who hates Monday, to cats showing up in all types of cartoons, to being a defining pillar of internet culture.  Of course, this also includes comic books.

Here are a couple of graphic novels that should pique your cat-loving interests and are great entry points for new comic book readers.

There’s very few forces in the Marvel Universe that have such potency to affect every hero and villain in all corners of existence.  The Phoenix Force, Thanos, Galactus,  Chewy The Cat.  In this collection of short comic vignettes, the reader gets to see Captain Marvel’s cat Chewy (Renamed Goose in the movie) interact with a whole slew of Marvel superheroes and villains.  These various shenanigans include becoming a Venom like version of itself, getting his own Iron Man suit, somehow becoming a Herald of Galactus and so on.  These short one to two page comics were originally featured on Marvel’s Instagram account and are mostly wordless, so the art does a lot of the major lifting in terms of storytelling.  As an added bonus, this collection also includes character profiles for all the characters featured inside, so while being mostly a fun book full of cat mischief, it also can be a nice bit of information for new readers.

I’m pretty sure that Blacksad is the most featured title in So You Want To Read Comics history, at this point.  But, for good reason.  Blacksad is a beautifully rendered series packed full of noir drama and action, with just the right amount of social commentary to be poignant but not preachy.  But, the main reason it’s on this week’s edition is because the main character is a freaking cat detective. And I don’t mean a detective who investigates only cat-related crime, but a detective who is a cat.  Of course, I can’t speak for everyone, but some of the reasons I love my cat aren’t for the things he actually does, but the things I imagine he does. One of my favorite pastimes is to imagine the lives he leads when I’m not around.  Blacksad basically feels like one of those fantasies put down on paper. So while your own kitty might not be rocking a trenchcoat and driving a yellow cadillac, reading Blacksad might help you imagine them doing those things.

Who’s your favorite cat in pop culture?  What did you think of these recommendations?  Let us know in the comments section below.