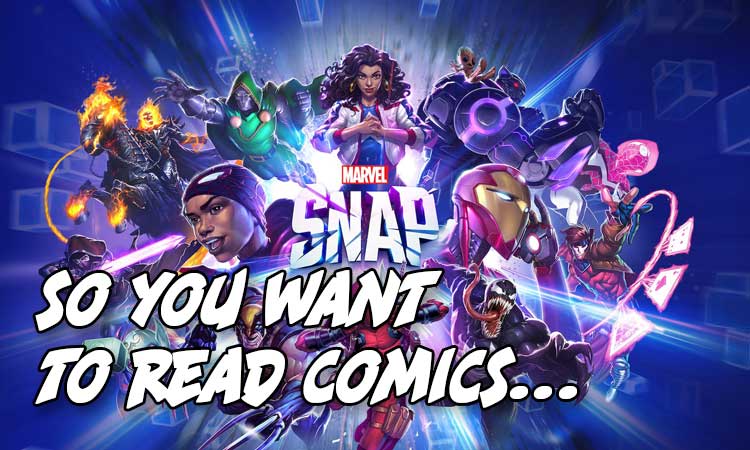 So You Want To Read Comics: Marvel Snap Edition

We’re free to play with this week’s “So You Want To Read Comics”.  This is our weekly feature where we take a look at a single topic or genre, then give you two comic book recommendations, perfect for new readers, based on that topic or genre.  This week we’re talking Marvel Snap.

Released in 2022, Marvel Snap is a mobile game developed by Second Dinner and published by Nuverse.  Falling into the collectible card game category, players take turns playing cards featuring both well known and obscure Marvel characters, in order to capture locales from the Marvel universe as well.  Gameplay is quick and encourages moving on from match to match. The game has proven to be very popular having over 12 million downloads and has earned over 10 million in revenue in its first month alone. Not to mention it also won Best Mobile Game at this year’s Video Game Awards.  One of the big appeals seems to have been a lack of aggressive monetization and a collection of cards that appeal to fans of Marvel comics both old and new,regardless of how one came into the fandom.

So here are some collections for fans of Marvel Snap who are looking to capture some of that fun in a different format.

When you break down Marvel Snap into its core elements it is essentially a game about pitting teams of superheroes against teams of villains, as well as  each other, in a fight for dominance.  Now, you can basically throw a rock and hit a storyline involving large teams of heroes and villains fighting each other, and there were even some before Secret Wars, but this story basically set the benchmark to which all other similar events are judged by.  Secret Wars tells the tale of how the insanely powerful being known as The Beyonder plucked all these heroes and from across the Marvel Universe to duke it out, with the winner being given the ultimate prize. It’s a big event, with a large roster of characters, yet it manages to remain readable even by those who aren’t completely familiar with everyone involved.  It’s also a great capsule of an age of comic book writing that has gone to the wayside.

There’s one component of Marvel Snap that is basically at the center of the whole thing (as well as being the main way the game monetizes itself) and that is the use of variants.  While in the game this is represented by the cards themselves changing form from plain to 3D to shiny and animated.  The thing is, the comic book industry has a long relationship with this concept of variants.  Starting in the late 80s, comic book publishers started creating variant covers as a way to artificially create rarity amongst their titles, which in turn spawned a speculator market of those trying to get their hands on them hoping they’d be worth money someday.  While the practice itself is a bit problematic, what isn’t is the great artwork that was created.  In this collection you’ll find a whole slew of variant covers from Marvel’s history. Some of these covers were simply one off collaborations with popular artists, while others were part of company wide initiatives.  So for those who just want to look at some nice comic book cover artwork, this is the collection for you.

Have you played Marvel Snap? What do you think of these recommendations? Let us know in the comments section below.