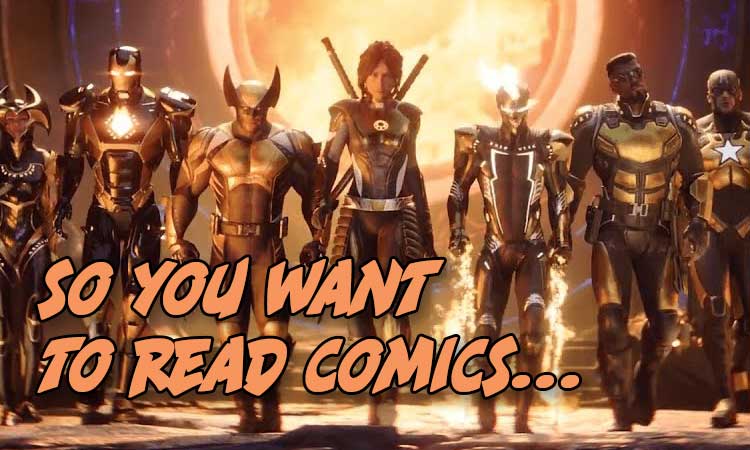 So You Want To Read Comics: Midnight Suns edition

We’re hunting monsters with this week’s “So You Want To Read Comics”.  This is our weekly feature where we take a look at a single topic or genre, then give you two comic book recommendations, perfect for new readers, based on that topic or genre.  This week we’re looking at the new video game release Marvel’s Midnight Suns.

On October 7th, Midnight Suns, developed by Firaxis Games, was released on all current consoles as well as PC.  The game allows players to take control of “The Hunter,” who is tasked with hunting down the villain Lilith as well as battling against the various characters she’s corrupted with her powers.  Along the way, The Hunter is joined by some of Marvel’s most well-known heroes like Spider-Man and Iron Man, as well as some lesser-known characters like Nico Minoru and Magick. The game emphasizes a strategic approach to battles while utilizing each hero’s unique abilities.  It also puts a spotlight on a corner of the Marvel Universe that doesn’t always get a lot of attention and that is its supernatural/horror corner.  What’s interesting is that The Midnight Suns are not a new concept made for the game, rather it’s been a team with a rotating roster that’s existed since the ’90s.

So here are some comic books to check out if you have a desire to know more about The Midnight Suns or just like the idea of teams of heroes fighting monsters and the occult.

SPIRITS OF VENGEANCE: RISE OF THE MIDNIGHT SONS

Fans of the game will find a lot of familiar faces here.  Characters like Ghost Rider, Blade, and Lilith all appear in this collection.  Here we see Lilith and her forces waging battles across the Marvel Universe which draws in heroes from all over to combat her.  Now, the game isn’t a direct adaptation of this, there are some strong similarities for sure. While this was originally billed as a Ghost Rider-centric crossover event when these stories were first published, it was in these collected issues that The Midnight Sons got their start.  While there have been many reiterations and loose team-ups since then that have used the moniker, it was this team that laid the groundwork and set the tone for many of the stories to come later.  While these stories come from the dark ages known as the 90s, and it shows, there’s a fun element to some of the camp and dated material.

Marvel doesn’t have a monopoly on horror and magic-themed superteams.  In fact, DC has a whole slew of teams that could fit that description.  But, for my money, the most recent and successful is Justice League Dark.  Originally being one of the launch books for DC’s New 52 initiative,  Justice League Dark would get a new lease on life in 2018 when the team was reformed being headed up by Wonder Woman.  In this volume, which was marketed as being new reader friendly, a magical portal has opened and what comes through is trying to suck up all the magic on earth.  This of course would destroy everything, so it’s up to all the magic-using heroes to band together and put an end to this threat.  The problem is that most of them really don’t like each other.  While it’s sometimes hard to draw a line between superpowers, science stuff, and magic in the DC Universe, there seems to be real attention given here to make sure the action feels based in magic and they do a good job in introducing these characters to people who aren’t familiar.

Have you played Midnight Sons yet?  What did you think of these recommendations?  Let us know in the comments section below.