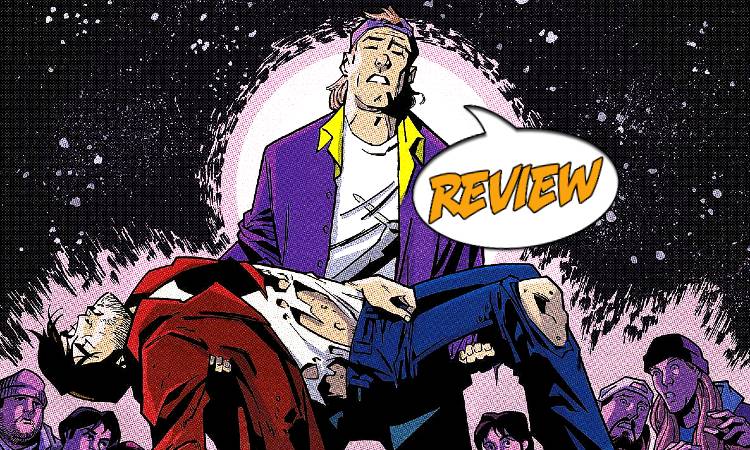 Did I ever tell you about my cousin Walter? Clerk meets Mallrat at a funeral for a legend. Your Major Spoilers review of Quick Stops #2 from Dark Horse Comics awaits!

Previously in Quick Stops: Clerk Randal Graves and mall rat Brodie Bruce attend the funeral of their legendary cousin, Walter, and recount their favorite memories of the hamster-challenged hero who broke his neck in a scandalous scenario!

At an undisclosed point in the ’90s, young Randal Graves is going to a funeral, only to be interrupted by his high school friend, Gwen Turner. When she asks if he wants to come and “hang out” (which is code for sex), he explains that he has to go to the funeral for his cousin Walter. Once inside, Randal is joined by their other cousin Brodie, and the duo begins to reminisce about Walt’s life: The time he got a cat stuck in a very uncomfortable place (NOT the back of a Volkswagen), the way he died, and the untold story of what happened when all three cousins saw Batman back in 1989. Brodie and Randal wanted to be vigilantes themselves, buying leather coats and taking to the streets of Leonardo to save the innocent from the clutches of whatever criminals would come. Of course, a hero is only as good as their villain, and a sudden bucket of paint from an overpass heralds theirs… Call him Count Cockula!

As the target audience for this book, it’s one of the more entertaining twenty-page explanations of an in-joke that I’ve read recently. Hester and Parks are really talented artists, giving us recognizable View Askewniverse locations and moments throughout the book, starting with the very first panel revealing the same funeral parlor from Clerks. Given that so much of the narrative is just a back-and-forth between two characters, it’s quite impressive how visually impressive the storytelling is. When we get to the flashback, the entertainment comes in seeing Randal and Brodie trying to be superheroes, giving us a few action sequences that feel like more traditional comic book stuff. Of course, Kevin’s story is also a very specific kind of fan-service, showing us the Quik Stop, explaining how both cousins know that Walt always wanted to try the activity that killed him, and ending with Randal talking about an interview that he had the next day with RST Video. My main complaint is that having Graves/Bruce team in center focus without a Dante, a T.S., or even a Silent Bob to mellow their histrionic tendencies can make for dialogue that borders on grating.

For a book that doesn’t feature the likenesses of Jeff Anderson or Jason Lee (or, for that matter, Joey Lauren Adams), Quick Stops #2 ends up being a pretty interesting prequel to the first two View Askew films, with strong art making up for the parts that we’ve already been told in those movies, ending up with a better-than-average 3.5 out of 5 stars overall. If you can hear Randal in your head the way I can, you’ll likely enjoy this one, but even casual Kevin Smith fans might find this one a little too fan-servicing.

I often wonder if certain comics are designed just for people who already know the properties being featured, but this one is absolutely so. As someone who knows all the jokes, it's fun without breaking any new ground, with art that's quite good.