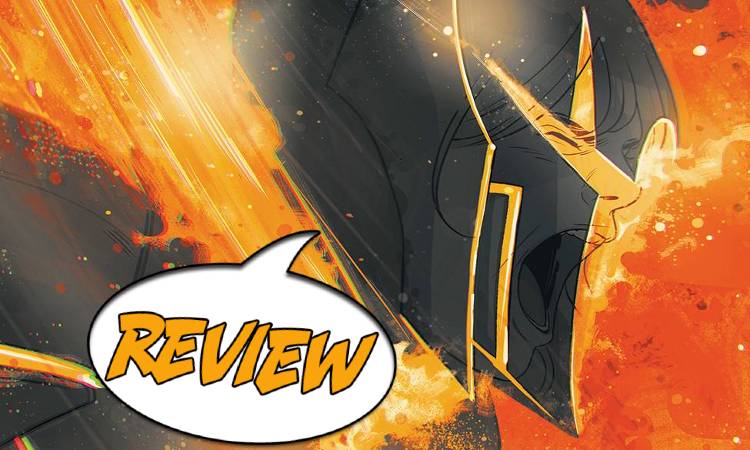 After last issue’s fight with a sea monster, an old enemy returns! But even worse than killers with masks, is the REAL villain: Strength training! Your Major Spoilers review of Rogue Sun #8 from Image Comics awaits!

Previously in Rogue Sun: Still reeling from the aftermath of his fight with Cataclysm, Dylan finds himself forging a new path, both at home and as a superhero. But with one poor decision comes bitter consequences… and the birth of a villain hellbent on revenge.

A DAY IN THE LIFE…

Settling into his new life on The Bell Estate, Dylan is dealing with a number of stressors. His new family is weird, with his father’s wife insisting that he do extensive physical training to make him stronger and faster. His stepsister who tried to kill him is in charge of his math tutoring and the little brother he never wanted decided to wake him up by banging pots and pans. His return to school isn’t any easier, with the girl of his dreams out-and-out calling him a jackass and even his friends feeling like he’s trying too hard to be cool. As for Suave, the mirror-faced villain from a couple of months ago, he also has big plans, calling in his henchmen to back him up. But the problems that stem from that lead to an ominous final page and the possibility that Rogue Sun is about to meet his match!

…OF A JERK PROTAGONIST

The hardest part of reading Rogue Sun is the fact that the protagonist is unabashedly a jackass, and this issue really hammers that reality home. The warning from Aurie that everything isn’t about him is telling, but the big problem is that this characterization feels very similar to that of Marshall from sister book Radiant Black. The long game here is obviously to build a jerk into a stalwart hero, but it’s kind of hard to get past the bull-headed snarkiness that Dylan exhibits throughout the issue. Suave’s return makes me happy (because I frankly love his design) but he has a very similar voice to Rogue Sun, which makes their conflict feel a little flatter than I had hoped. Visually, the story is somewhat less problematic, but the whole issue uses very flat, very drab colors that mute my enjoyment. Even with those complaints, though, the vivid facial expressions of the issue are a lot of fun, and make the villains mirrored Cobra Commander masks stand out that much more.

The pacing of Rogue Sun #8 feels like the multiple subplots simmering in ’70s comics from the Big Two, with a number of different storylines swirling about until one takes the forefront at the end of the issue, with art that works and coloring that doesn’t do quite as well, earning 3 out of 5 stars overall. Even with my “jerk hero” complaints, it’s a satisfactory story that moves things along and kicks off the new arc well enough that I still intend to be back next issue to see where it’s all going.

Dylan is now officially Rogue Sun, so his real problems can begin. The look into the behind-the-scenes of superherodom is interesting, but the buildup to a new villain is the real star.