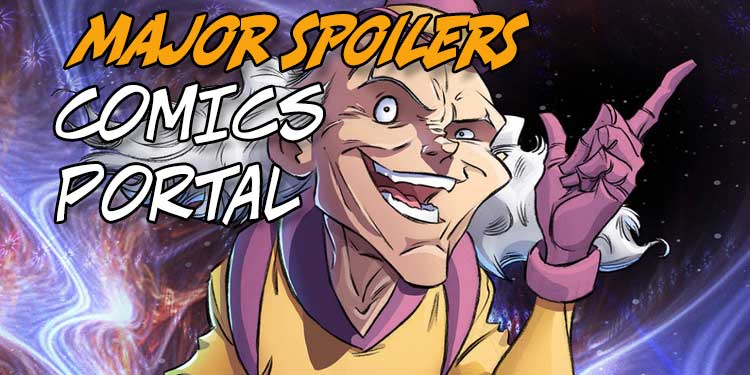 DC recently had a week in which they had three Fifth-Dimensional imps showing up! What’s with that? Nightwing #98: “Nightwing meets Nite-Mite! (And Bitewing and Oracle and Daniele Di Nicuolo!) That’s right, that meddling Nite-Mite booped himself from the Fifth Dimension, and after reading Seven Secrets, he hitchhiked his way over with Di Nicuolo into our Nightwing series! Trust us, you’re not going to want to miss this one.” First imp: Bat-Mite alike, Nite-Mite!

Dark Crisis: Young Justice #6: “Superboy, Robin, Impulse, Wonder Girl, Arrowette, and Red Tornado are all reunited, but is it too late for them to face down the unmitigated and unhinged power of Mickey Mxyzptlk?” Second imp: Teen Mickey Mxyzptlk (pronounced “Miks-yez-pittle-ik”).

DCeased: War of the Undead Gods #4: “Nothing is what the heroes of Earth thought it was. The shocking truth is finally revealed and the fate of all of existence hangs in the balance.” Third imp: The big guy, Mr. Mxyzptlk himself.

It should be noted that the first and last of these three comics were written by Tom Taylor, and the second was scripted by Meghan Fitzmartin. I did enjoy the cute mention of another of Mr. Taylor’s comics, Seven Secrets, in the description of that first book in this list.

That’s not the only “cute” thing in these books. The name of the imp in Nightwing is “Dyxl,” which compares nicely to the hero’s real identity, Dick (Grayson).

The thing I never can figure out is the amazing amount of restraint these imps seem to be able to exert over their powers. I mean, they can literally do anything, and yet they stick to displaying their ugly fashion senses (purple and orange) and other minimal tinkerings within “our” world in the DCU. This all points to a serious concern I have when it comes to magic—it usually turns out to be like “pulling a rabbit out of your hat” or a way out of a corner a writer has put himself or herself in and he or she hasn’t thought of another way out of this predicament.

I just hate that!

It all reminds me of Alan Moore’s “final” Superman story in “Whatever Happened to the Man of Tomorrow?” back before John Byrne took over the Man of Steel. The ultimate baddie turned out to be Mxyzptlk himself, who finally revealed his true colors. He says to a fleeing Clark and Lois, “Did you honestly believe a Fifth-Dimensional sorcerer would resemble a funny little man in a derby hat?” Yeah, I felt the same way—again, he could do anything, and yet he chose a non-threatening appearance like that! It didn’t make sense to me! Still doesn’t, in fact!

I always like to point out what I consider to be the best use of magic, and that’s in The Dresden Files by Jim Butcher. He always explains how each spell works before it is used, and it makes sense in both the comics AND the novels he writes. I think it makes the magic even scarier when we know how it has to happen!

Now, I get that creators need an occasional break from all the darkness and ugliness, so they employ comic relief! And who better to do that than someone who, again, can do anything? Even comedy, a serious no-no in comic books!

WHY SO MANY IMPS? What I particularly don’t understand is the need for three imps when one could do everything needed? What is it about “our” DCU that attracts so many of them to us?

Mickey is apparently the son of Mxy, but I don’t want to know how that took place! Imp reproduction is not an interest at all! I guess we need a teen imp so he could be relatable to the teen heroes in that book. I mean, why couldn’t Mxy just appear as a teen imp instead?

I guess it also says something about a hero when he attracts the attention of an imp from the Fifth Dimension, and that imp even mimics his appearance! Nightwing is now in the big leagues, huh? Batman had Bat-Mite, and now Nightwing has Nite-Mite. Imitation is the sincerest form of flattery, right?

My favorite imp story took place in a book called from Evan Dorkin called World’s Funnest, when Bat-Mite and Mxy are working against each other. They end up in all kinds of different settings, and it worked well! It was actually funny! Truth be told, we very rarely ever see a magical imp these days in comics! To have three of them turn up in one week kind of reminds me of the story when only two automobiles existed in the state of Ohio back in 1895. They managed to crash into each other although there were no other cars in the entire state!

We don’t need that many magical imps running around! Mxy himself is fine, but Bat-Mite was developed so the other member of the World’s Finest team had a magical opponent who could frustrate him once in a while. I think the “imp-possible” has happened, and we have crossed a line DC shouldn’t have!

I realize that multiple editors can’t completely keep in touch, but someone should have said, “Hey, we’re using a Fifth-Dimensional Imp in a future issue” during an editorial meeting! That they all appeared during the same week is just so weird that I have to wonder if Mxy himself is behind it all!

What do you think? Do magical characters work for you? Is Mxy good or bad for Superman/DC? Do we need more magical/comical characters in comics or fewer of them? Feel free to share your opinions below!