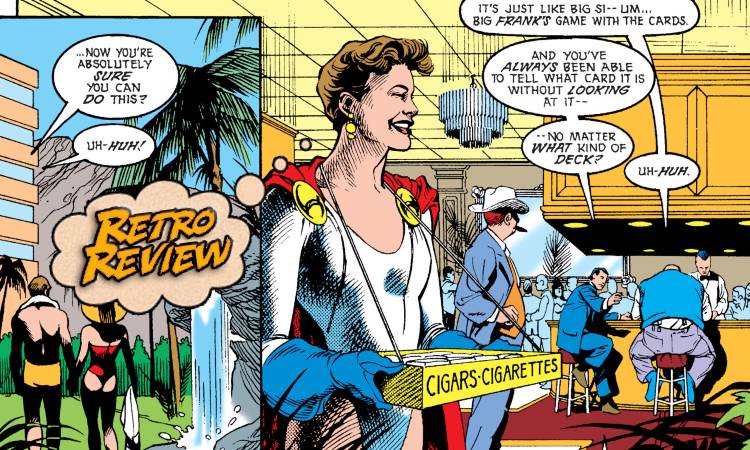 Blue Beetle and Booster Gold have a plan that will make them rich as long as nothing goes wrong. Wanna guess what happens next? Your Major Spoilers Retro Review of Justice League America #34 awaits! Previously in Justice League America: The island is called Kooey Kooey Kooey, a beautiful oasis in the Pacific. After the events of Invasion!, wherein an alliance of aliens invaded the Earth, it’s also annexed by the Justice League for a teleport site, which has brought the island to prominence for the first time ever. (This is all thanks to its strategic position on the globe, making it highly sought-after by the United States and the USSR. It is 1989, after all.) Last issue, though, Booster Gold and the Blue Beetle had what they considered a brilliant idea: Turn the island into a luxury resort, take most of the profits, and get rich quick! As the issue opens, two important people find themselves in possession of the Club JLI brochure. The first is Major Disaster of the Injustice League, coming off another terrible loss to the Justice League International team and seeking a big win to get him back to the top. The other is Maxwell Lord, who is apoplectic with rage at the entire enterprise (especially the part that claims he has signed off on the resort) and asks the Martian Manhunter what they should do to stop it. But it’s The Batman who has the armor-piercing question: Where did the Blue & Gold team, both of whom have recently gone publicly broke, get the money to fund it? Max stalks away, intent on finding (and probably murdering) Booster and Beetle, and understandably so, as they’ve just defrauded a United Nations subsidiary out of millions of dollars. It’s a very serious crime that is never really played as such, thanks to Giffen and DeMatteis focusing everything on the personalities. On the one hand, that generates a lot of fun banter and clever bits, but on the other, the entire team seems feckless and childish. It’s a difficult proposition that’s only going to get more difficult as the JLI era continues. While Max is in transit, the Justice League is unaware that another key player is heading for Kooey Kooey Kooey, with a plan of his own, thanks to fellow Injustice Leaguer, Big Sir. Though he has a learning disorder, Big Sir is a whiz at counting cards (Apropos of nothing, Rain Man hit theatres the previous year), leading the Major to realize that they could bankrupt a casino with ease, if only they could find one with owners dumb enough not to notice.

We all know where this is going, right? As that last panel reminds us, this issue is drawn by Adam Hughes, known for his beautiful art and especially his beautiful women. The tropical island setting allows him to fill the story with beautiful people in bathing suits, and the in-joke on the cover of that brunette’s book is quite fitting. While the Injustice Leaguers are breaking the bank, the island’s Chief is having second thoughts about the entire affair, having entered into the contract with the JLI to try and preserve his culture in the face of Cold War geo-politics. The arrival of Aquaman heralds even worse news for the Leaguers, as the Sea King tells them it’s imperative that they evacuate the entire island, ASAP, but we, the readers, don’t hear why. We do, however, quickly see the reason for the urgency, as the whole island is wracked by earthquakes. As the entire contents of the Justice League International operating budget blow away into the sea, the chief of Kooey Kooey Kooey smiles serenely from the edge of another part of the island, explaining that Kooey has been wanting to move. Aquaman, Blue Beetle, and Booster Gold continue getting bystanders to safety as Aquaman berates them for their extensive construction on the island, likening it to an alarm clock. Beetle is confused, wondering how any of this is actually his fault and how an island can “wake up” in the first place. Not only is Kooey Kooey Kooey alive, but she has decided that she’s no longer interested in the South Pacific. As Kooey goes walkabout (floatabout?), the heroes are forced to go along for the ride, with Aquaman ominously warning them that he can’t even swim away unless the island LETS him. It’s an oddly serious, ominous note to end on, but this issue reminds us of how serious the JLI’s wacky bwah-ha-ha adventures could really get. I remember this entire arc as silliness, but Justice League America has a little something for everyone, with pathos, serious consequences, goofiness, and a little bit of commentary on colonialism thrown in, earning 3.5 out of 5 stars overall. In a lot of ways, this issue comes at a turning point for the JLI, as more and more grimdark creeps in from this point forward, with Breakdowns ending this League for good by the spring of ’92.

But, maaaan, was the art amazing.

An issue that I remember as a big silly romp is actually a lot more serious and ominous, with a lot more Aquaman than I recall, and Major Disaster losing his money is heart-breaking.