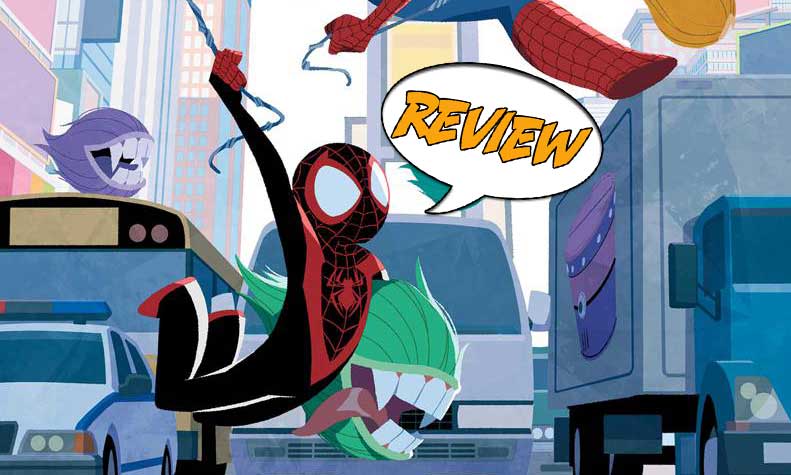 Miles and Peter join forces for the best Take Your Sidekick To Work Day ever.  Your Major Spoilers review of Spider-Men: Double Trouble #1 from Marvel Comics, awaits!

Previously in Spider-Men: Double Trouble: Peter is still struggling with his roommate Venom, but that’s not going to stop him from bringing his good pal Miles Morales with him for Bring Your Sidekick To Work Day, even if Miles isn’t his sidekick.

Spider-Men: Double Trouble #1 opens with Miles rushing through his breakfast so he can join Peter for a surprise.  He swings over to Peter’s apartment that he shares with Venom and the two quickly head out.  Along the way Peter and Miles discuss whether or not Miles is Peter’s sidekick.  They eventually arrive at a warehouse that Peter insists is a hangar, where he stores all the tech and artifacts he takes off the villains he defeats.  While inside, a miscommunication between the two Spider-Men result in a horde of furry creatures being unleashed on the city.  The two split up to contain the issue, while deciding on what to get for lunch.  But, lunch doesn’t come due to another piece of Peter’s collection causing trouble.

FUNNY, BUT NOT OVERBEARING

With this being the third in the “Double Trouble” series,  Mariko Tamaki has really honed their ability to capture that sitcom/late night comedy feel and transfer it into a superhero comic.  It’s the restraint in this that really puts this up above a lot of comedic comic books out there.  Not every panel needs a joke and the jokes themselves don’t need to be the classic setup then punchline formula.  In Spider-Men: Double Trouble #1 a lot of the comedy comes from the back and forth between Peter and Miles which has a lot of winks and nods towards some of the sillier stuff in comic books, but doesn’t go so far as to break the 4th wall. The plot itself is pretty basic and acts mostly as just a vehicle to facilitate the conversations between Miles and Peter which once again lends itself to the sitcom feel, but also means that the cliffhanger at the end isn’t very effective in creating intrigue.  So if the humor in this doesn’t catch your attention, the plot isn’t either.

Spider-Men: Double Trouble #1, like the other entries in the Double Trouble lineup, features the art of Gurihiru, and there’s definitely a similar look here as the other miniseries’.  But, there seems to be an effort here to add some more shading and depth to the art here that departs from the mostly flat, cartoonish, look that was utilized before.  Not to say that there’s any attempt at realism here, it’s simply a more multidimensional look.

Spider-Men: Double Trouble #1 is pretty much just more of a good thing.  The Double Trouble books have all featured smart yet approachable humor that relies more on conversation rather than visual gags or slapstick.  But, if that’s not your kind of thing, there isn’t anything else here to capture attention. 3.5 out of 5 stars.

Spider-Men: Double Trouble #1 isn’t going to blow anyone away with its amazing story. But, for a fun and quick read, you could do a whole lot worse.