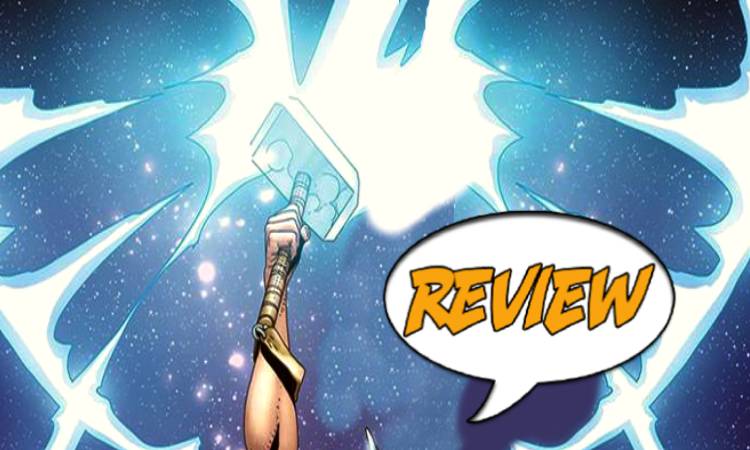 From across time, space, and dimension come the Avengers, united to face off against the Multiversal Masters of Evil! Your Major Spoilers review of Avengers Assemble: Alpha from Marvel Comics awaits!

Previously in Avengers Assemble: Alpha: From throughout time and the far corners of the Multiverse, the Mightiest Heroes of All the Earths are assembling as never before for a battle beyond all imaging. A war that will take us from the prehistoric beginnings of an Earth under assault by the greatest villains who’ve ever lived to the watchtower that stands at the dark heart of the all and the always, where an army of unprecedented evil now rises.

Having arrived in the prehistoric past, The Avengers of 2022 stand arrayed against their 1,000,000 BC counterparts. Conflict seems inescapable, but Thor realizes it’s even worse than they think: “One of them… is my father.” Odin and Thor aren’t the first to throw hands, but the battle quickly escalates out of control. Namor threatens to tear the caveman Starbrand to bits, while Mammoth Rider battles Captain America, with Agamotto all the while trying to keep the peace. That’s when the Doom-Above-All arrives to murder yet another Sorcerer Supreme, and since it’s Agamotto, he goes for the eyes. All the while, Avenger Prime (whose face is still hidden by one of Thor’s old helmets) is under siege by an army of Mephistos from throughout the Multiverse, stabbed in the back repeatedly, but the arrival of his army from the pages of Avengers Forever seems like it will turn the tide!

Or, at least, it would, if Ghost Rider could actually call upon his powers for the fight…

I think my biggest complaint about this issue is the point where it picks up our story from the perspective of the various Avengers books. Invincible Ant-Man and the All-Rider’s arrival doesn’t feel like it picks up from the point we last saw them in issue #10, and the primary Avengers team has been out-of-focus in their own book, so it’s very difficult to feel acclimated to their new status quo and membership. Aaron’s stories are always great when they push the boundaries of the Marvel Universe, but this one has expanded so fast that it feels like there’s no clear focus. Hitch’s art is a little bit off as well, with his usual smooth finishes feeling a bit rough. Faces especially show this strain, and what’s worse, this Captain America looks exactly like the one from The Ultimates, making it feel like an alternate reality. (The fact that Starbrand is drawn as just The Hulk with red skin and a brand is also off-putting for me.) The appearance of Doom is very good and visually stunning, but it’s followed by the Mephistos breaking through reality or time or something? I’m honestly not sure what it’s meant to represent.

Even with those issues, Avengers Assemble: Alpha does what it promises, bringing together the cast of thousands from Avengers Forever with the Avengers from 1,000,000 BC and the Earth-616 Avengers team and setting them up against the biggest threat ever to bring Aaron’s run to a smashing close, pulling together for 3 out of 5 stars overall. I’ve been feeling a little bit of multiverse fatigue of late, so I’m very interested in seeing how they wrap this one up and if it actually works as the capstone of five years of Earth’s Mightiest Heroes action.

We finally meet the mysterious Avenger Prime, an army of Mephistos attacks, battle at the dawn of time, but it doesn't feel like a story so much as the cold open. At least it's the open to a story I want to read.