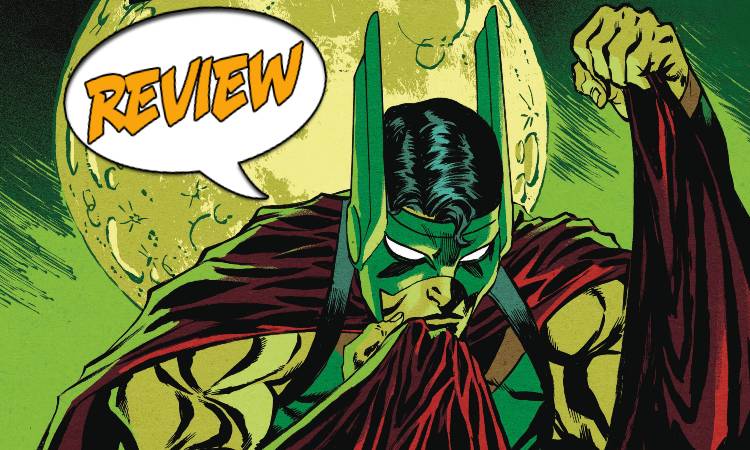 They call him Phantom… BOB Phantom. And he’s one of the oldest Golden Age heroes of them all. Your Major Spoilers review of Bob Phantom #1 from Archie Comics awaits!

Previously in Bob Phantom: After failing to aid a dying criminal in order to get a more gripping news story, burgeoning journalist Walter Whitney not only gains national acclaim, but the attention of a ruthless global crime syndicate; now he must go from mild-mannered reporter by day to Bob Phantom, a heartless ambulance chaser and hardened crime fighter by night.

Bob Phantom #1 opens with Walt Whitney in the middle of some sort of crisis, focusing on documenting the moment with his phone. Cut back to some time before, as Walt introduces himself and his world on his way to work. He stops at the steps of the New York Times before revealing that he actually writes puff pieces for the Blue Ribbon Gazette across the street. His editor is mad about his latest piece, making unsubstantiated accusations that a local millionaire is, in truth, the hero Captain Flag. Instead of the incendiary piece that he wants to write, Bob is sent to cover Valerie Brown’s debut in The Phantom of the Opera, only to step in as someone tries to kill her. He fails to stop the attacker, but goes viral as he watches Val fight off the stabbing herself. Someone calls him “Bob, the Phantom of the ass-kicking”, which sets his imagination running wild. After dreaming of himself as a teleporting superhero, he encounters a bank robbery, and Bob is a phantom no more!

BOB, PHANTOM OF THE ASS-KICKING

The premise of this issue isn’t quite what the solicitation copy had me believing, as all the Bob Phantom action in the story is in Walt’s imagination/hallucination. In fact, it’s hard to tell where reality and fantasy actually are in this issue, as he calls Valerie his ex-wife, but she doesn’t know his name. He seems to get everything together after stopping the robbery and filing a story about the criminal conspiracy behind it all, but that may or may not have happened, and the final page is multiple layers of confusion for me as a reader. I honestly don’t know what’s real and what’s not, and while that might be the intent, it does make for a frustrating reading experience. That said, the art is a lot of fun, with one artist showing Bob’s dirty, mundane world and another handling his “superhero adventures.” I feel like the superhero portions are slightly more successful, with a cleaner line and clearer storytelling, but the balance between them is nice, even if the transition points aren’t clear enough for my tastes.

In short, Bob Phantom #1 toys with surrealism, taking the 1939 debut story and giving it new twists, tons of cameos (Captain Flag, Hiram Lodge, Cheryl Blossom, and more) and trying for something entirely unprecedented, and while the end product has its issues, it’s still worthy of 3 out of 5 stars overall. I’d like to see more from this team, in this vein, if only to see how they pull it all together, as ending a one-shot with the clear intention of the proverbial adventure hooks bothers me on some level.

On the one hand, it's an entertaining concept full of Archie/MLJ Easter eggs, with some lively art. On the other, it feels like a set-up for more stories, but it's posited as a one-shot.