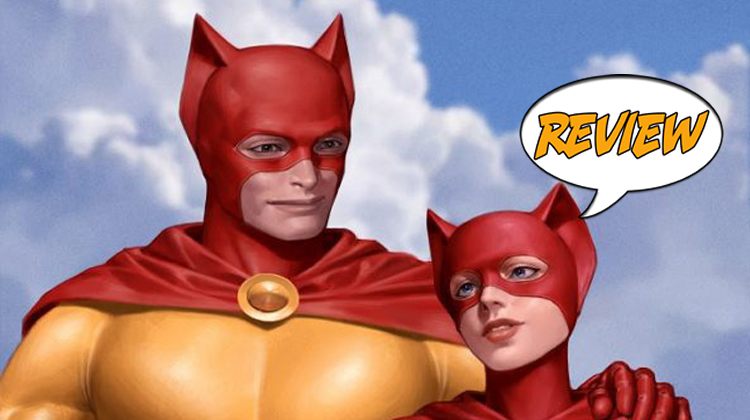 Cat-Man and Kitten #1 from Dynamite Entertainment is a fun return to the superheroes of the past, and who better to write it than Jeff Parker!

SOLICITATION: An astonishing standalone superhero story that only Jeff Parker could create! Witness the heroic Cat-Man and his loyal sidekick Kitten as they become embroiled in a dangerous race to recover a priceless artifact that may hold the key to conjuring an ancient god of death! Can our classic adventurers evade pterodactyls, throw hands with the Lavender Gang, and survive the serpentine Snake Men? Find out, in this thrilling one-shot by writer Jeff Parker (Batman ’66) and artist Joseph Cooper (Ninjettes)!

CAT-MAN LIVES ANOTHER OF HIS NINE LIVES!

Before we get too far into this comic, any resemblance between the lead character (and his sidekick) in this book and Batman & Robin is, of course, purely coincidental! But I’m big on what I call the “Bat-alikes,” so I was immediately drawn to it!

Jeff Parker is one of my favorite comics authors! He’s great at spinning stories that have one important word involved: ADVENTURE! I particularly loved his Future Quest series for DC—the one that brought many of the Hanna-Barbera heroes back! But I see his name on something, I buy it!

We’ve seen Cat-Man getting some attention in several places, including DC when Gail Simone turned him into the most interesting guy in the Suicide Squad. He was also retconned by AC Comics in the 1980s. This specific version of the hero comes from the pages of Project Superpowers: Chapter Two by Jim Krueger, Alex Ross, Joe Casey, and Phil Hester. That tale took Cat-Man back to his animalistic roots before returning to his heroic ways thanks to the help of his young sidekick. Raised in the Burmese jungle by tigers and then returned to America to fight crime in the big city, the character has been described as “an odd amalgam of Batman and Tarzan.”

So, what does Mr. Parker have to say about all this? In a recent interview, he stated:

“The Cat-Man & Kitten special is artist Joe Cooper and I taking the reader into the world of a relatively obscure Golden Age hero and exploring how cool that can be if you embrace the wild elements instead of trying to subvert everything,” said writer Jeff Parker. “I wanted to craft a story that starts at one end of the pulp spectrum and keeps expanding in scope. Also, we have some appearances from other Project Superpowers characters and we’re keeping an air of mystery around them that fits the feel of the book. Boss Editor Nate Cosby is bringing in powerful cover artists like Case, Edgar, and Yoon to really cap this project.”

Like many stories told by Mr. Parker previously, we the readers are taken to various locations like a glamorous ball when a fabled jewel is being displayed, a séance conducted by the mysterious Marvelo, a flight over Mexico where a place is attached by pterosaurs, and a Mayan pyramid. I like the unusual locations he takes us!

The writing is fast-paced, and the people spring to life right off the page, a skill Parker has always been excellent at! I would have liked to learn more about Kitten, though!

Naturally, there are lots of cat references and other characters along the way, and it’s all in good fun!

ART THAT WORKS IN EVERY SETTING!

An adventure story like this one gives an artist the chance to visit the aforementioned settings, and Cooper and company do a great job of transporting us to them. I never question the reality of the locales since they are so well displayed!

Still, it’s the action sequences that really shine in this one-shot. When Cat-Man is fighting one of the Snake Men, for instance, the hero is getting squeezed tightly, which made my ribs feel it! Then when Cat-Man fights back with his claws, that slash across the Snake Man’s neck also hurts! Ouch!

That’s not to say that the facial expressions are bad, though! They are ideal for comic characters, often showing surprise as the people face the unusual and the exciting. The only one that seemed to be smiling all the time was Kitten, though, as she seemed happy to be part of the adventure going on around her.

I’m always stunned when a comic book tells a complete story, and this one does that! (Guess I’ve read too many X-Men titles!) We see baddies of all sorts as they try to stop Cat-Man and Kitten or just hold up high society people along the way!

Things don’t always go well for this “dynamic duo,” and that leads to being zapped by a ray gun, facing a god from the murky realms, and flying in the fastest plane on Earth. Good thing the photographer brought along her camera!

Dynamite actually does this kind of storytelling very well! I still remember their great revising of The Owl from J. T. Krul a while back!

This is very much the kind of story I enjoyed reading as a kid. “Buckle that swash” and all that! I hope this isn’t the last we’ll see of Cat-Man and Kitten! More, please!

This is very much the kind of story I enjoyed reading as a kid. “Buckle that swash” and all that!