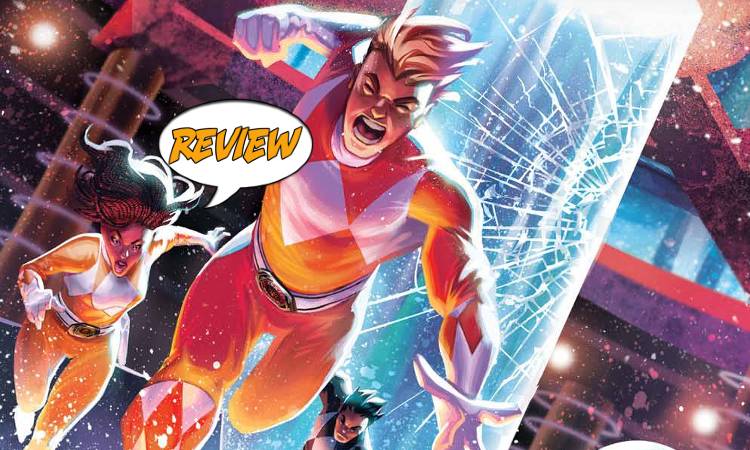 Something terrible is afoot on the moon, and an old enemy seems to be behind it all. Your Major Spoilers review of Mighty Morphin’ Power Rangers #102 from BOOM! Studios awaits!

Previously in Mighty Morphin’ Power Rangers: As the mystery of what happened on the embattled moon begins to unravel, a villain returns from the past, along with their sick and twisted creation!

“YOU MAY CALL ME… MISTRESS VILE”

This issue starts with a flashback to the days before the first issue of Go Go Power Rangers, even before the team was formed, as Matt tries to convince his friends, Trini and Zack, to give his new girlfriend a chance. Once they meet her, though, they immediately bond with Kimberly, leaving him behind. In the present, after being stranded on the Moon, the Power Rangers are fighting a battle on three fronts: Billy and Adam are trying without much success to repair the Dragonzord, while Rocky and Aisha battle Finster’s latest monster, leaving Tommy, Kimberly, and Green Ranger Matt to face the one who put down Zedd. That new threat turns out to be an old enemy with a new pedigree, as the former Rita Repulsa has picked up her father’s mantle as Mistress Vile! Worse still, she’s more powerful than anything the Rangers have ever faced, devastating their defenses and forcing them to leave one of their own behind on the Moon.

As Mighty Morphin’ Power Rangers #102 ends, Mistress Vile indicates that she has plans for the fallen Rangers, which actually seems worse than dying on Luna (which, as any Power Rangers aficionado will recall, has an oxygen atmosphere in this reality). The team barely escapes by commandeering the wrecked Serpenterra zord, crashing to Earth with Zedd in tow, which reunites the evil wizard with his former comrade Zordon for the first time in ten thousand years.  It’s a big moment that resets the proverbial board for the Rangers, but it’s also enjoyable to see how Flores handles the characters. The voices and personalities of the team are well-represented here, and the pairings of Rangers chosen are a lot of fun, especially Aisha’s gambit to defeat Finster’s latest stupid monster. The balance of whimsical nonsense to apocalyptic evulsion is well-done, and di Gianfelice really makes each character stand out. Tommy is thicker and taller than Matt, while Billy is slimmer than Adam, and Kim and Aisha each have their own body type. It’s a good-looking comic book.

BOTTOM LINE: A GOOD ONE

The new era makes Mighty Morphin’ Power Rangers #102 stand out among recent issues, successfully giving us recognizable characters and meaningful stakes on both the micro and macro levels, paired with some really distinctive art to make for a well-deserved 4.5 out of 5 stars overall. My worries about the fate of the fallen Power Ranger alone make it clear that the issue succeeded in its drama, but the redesign of Mistress Vile is remarkable, as well.

An unexpected return leads to a unexpected loss, and for the real Power Rangers nerds, we finally get to see Lord Zedd's face.

I don't recommend it.

But the issue is quite good.