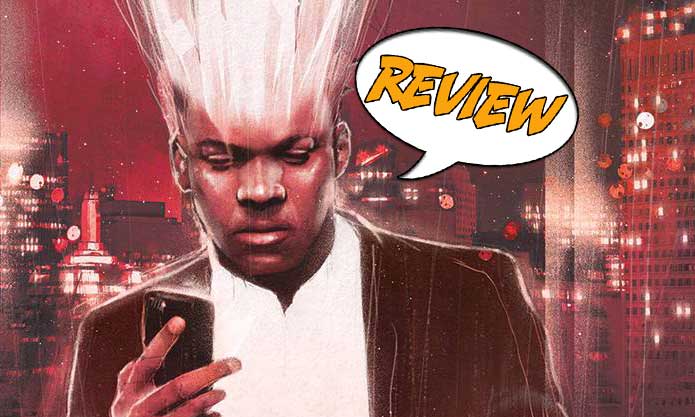 From being on top of the world to being in prison for murder, Ben’s life changes overnight. But what if it was not him, and what if someone else is behind the mind control? Find out more in Mindset #5 from Vault Comics!

Previously in Mindset: After using mind control on Winfield, Ben, Eitan, and Josiah get the deal they want for their app as long as Winfield gets revenue. Their last partner, Kushal, is dead. But Ben remembers instead that Kushal decided to visit his family in India and go off-grid. Atlanta meets with Ben and offers to become his VIP host. Everyone gets what they want. Then Eitan tells Ben about a study that seems to show people are becoming addicted to Mindset. But he also reassures Ben that this is a positive thing. It is not until Ben is on a trip with Atlanta that she tells him he has an annoying habit of checking his phone about every three hours, which is just about the suggestion window for their app…

Mindset #5 opens as Ben and Atlanta rush back from their conference to the latest party. Their users now have the ability to free themselves from technology, although the app also makes them return to it every three hours and fourteen minutes. Not only is this not Ben’s original code, but he is being controlled by it. With this realization comes more doubts about his partners. Who is controlling him? Can he stop them from controlling others with the app? But even if he finds them, won’t they just zap him again?

He goes to the party and confronts his friends. Did they know what the app is doing? Of course, the answer is, this was their plan all along. Ben remembers only agreeing to use the signal once to get the app started. He asks if Eitan used it on him, and Eitan says he did so under Ben’s own orders. Ben decides to shut everything down and starts to make the call. Winfield hits him, knocking his phone free in the struggle. Atlanta picks it up. The tussle continues, and Winfield says he has more board seats than the others, and he is ousting Ben as C.E.O.

Winfield is hit with a fire extinguisher and falls overboard to his death. Ben is arrested for his murder. His mother visits him, talking about how they gave him everything and he failed them by becoming a murderer and a failed entrepreneur. It sounds as though, to her, the failed entrepreneur is worse. His father does not want to ever see him again.

Atlanta uses the app on his phone to get him out of jail. He appreciates this and then immediately wonders if he can trust her. Is someone controlling her in order to control him? They go to a hotel, and she locks their phones in the safe for three hours and fourteen minutes.

Then Atlanta speaks. She left Atlanta to come to Silicon Valley and found the same kind of mind games. She decided then to not let herself be used. She was successful but admits that she had been working for Winfield when Ben showed up. He wanted her to distract Ben, figuring that Ben only wanted the money and fame, and Winfield could plan the takeover. But if she is her own person, she cannot be with someone else who is controlled. Then it comes out that Eitan killed Winfield and zapped Ben. Winfield might have been after the company, but Eitan changed the code. But how far back did Eitan’s plan go?

Together they kidnap Josiah and hold him away from all their phones long enough to make sure he is clear, and they tell him what is happening. In return, he comes up with a way to trace the signal and find Eitan. When they do this, they find that the signal does not originate from any of the company’s offices or properties. They trace it back to Stanford in a building staffed with security from Mindset.

The art of Mindset #5 continues to play with light and technique to focus the story. The Mindset party is on a boat. The establishing shot shows hazy indications of people on all the open decks. Winfield, Eitan, and Josiah are on the top deck, and they are bright figures, as are Ben and Atlanta as they move through the crowd. This use of silhouettes in white narrows in on the ensuing conversation and fight. Interspersed through this are moments when the app is being used. In a story with so many potential unreliable narrators, I like having the clue that someone may be getting a temporary reset.

Mindset #5 is deliciously disturbing. Ben’s perception of reality twists like a snake to the point where we feel almost as paranoid as he does.

Ben Sharp cannot make things right until he figures out who is behind the mind control.