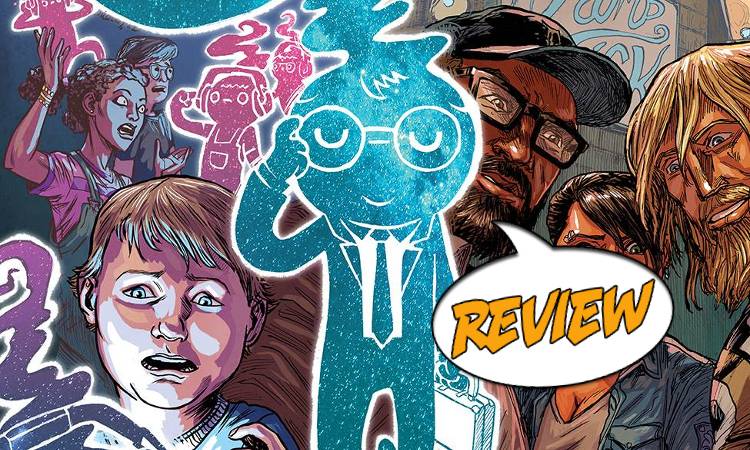 G-Day has come and gone, and the remaining population of the world has had to find a new way to live. It’s time to examine the first eight years of a post-Genie Earth! Your Major Spoilers review of Eight Billion Genies #6 from Image Comics awaits! Previously in Eight Billion Genies: It’s the story of the first eight years after G-Day, the moment when everyone on Earth got a genie and one wish. Humanity has found new ways to live. Come with us to explore the secrets of Hope’s Hollow, Tomorrowville, and the grooviest little town this side of Poughkeepsie… FUN CITY!

We pick up six months after last issue, with the Bad-A-Bangs rock and roll trio on the road, searching for their place in a world scoured by genies. As they travel, they hear of many different havens in the world, from Hope’s Hollow (where the Green family is now living, with Robbie in his superhero form serving as one of the Idea Man’s chief soldiers in the war against all the other survivors) to Fun City, a haven centered on creative pursuits. It’s there that bass player Daisy wants to go, but it’s clear that their talents aren’t up to the task, and Fun City only allows one audition per lifetime. There are also complications around genies, as Alex and Brian still have theirs, which leads to issues, including a flat-out assassination attempt. The Zhangs discover similar issues, with Lifang hiding her genie away to get into a small haven where they can raise their daughter Ting-Shu. But Ting-Shu’s genie leads to problems of its own, and by the time of her seventh birthday, it’s clear they have to act. Then, after more than seven years of practice, Daisy and her band are finally ready to audition at Fun City…

…an audition that they FAIL.

This issue’s story is perhaps my favorite of the series so far, as the expansion of the timeline makes is possible to follow all of our characters (save for the Lampwick’s proprietor) across a number of years. The Zhangs make a very difficult series of decisions, the Greenes refuse to admit that their new patron is evil and both stories abstract the passage of time very well. But it’s the story of Brian, Alex, and Daisy honing their musical skills and their wits for nearly a decade to make the cut at Fun City that really makes this one genius, especially seeing the bond between the three of them become what it is. Brian even admits to Daisy that, despite her selfish wish in issue #1, he has come to love her of his own accord. It’s a sweet moment that is followed by some impressive non-linear thinking on the part of himself and Alex that ends the issue in a shocking (but very satisfying fashion). As good as Soule’s script is, Browne manages to match it with the art and vivid coloring, especially in the depictions of the genies. The crown jewel is a moment where Brian’s genie is shot, then falls to the ground for a death scene worthy of Paul Rubens in Buffy The Vampire Slayer, only to pop up with a cry of “Just kidding!”

There’s clearly something rotten in the states of Denmark, Fun City, and parts unknown, and Eight Billion Genies #6 skillfully expands the timeline again, zooming out to give the characters room for growth, failure, and big changes, earning 4.5 out of 5 stars overall. This book started strong, but the slow burn of story has been very satisfying, leaving me wondering if the creators can do this kind of magic two more times and really stick the landing.

The Idea Man is clearly a villain, but every one of the havens proves to be kinda terrible, while the expanding time line makes for some satisfying growth for the former denizens of the Lamplight Tavern.