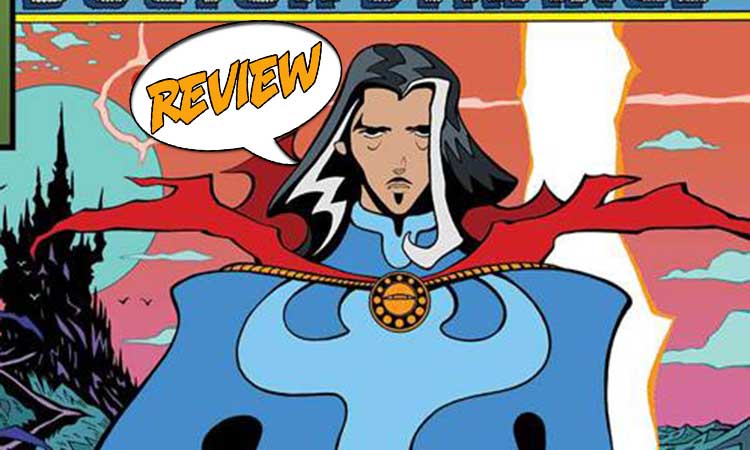 Stephen Strange has found himself in a land beyond comprehension. If he’s lucky not all the visions will want to kill him. Your Major Spoilers review of Doctor Strange: Fall Sunrise #1 awaits!

Previously in Doctor Strange: Fall Sunrise: Doctor Strange has been tasked with a mysterious task that has taken him to a realm he doesn’t recognize or understand.

THE DAY THAT IS SEVEN

Doctor Strange: Fall Sunrise #1 opens up with a disembodied voice speaking in verse. It then cuts to Doctor Strange awakening in a place with a touch of amnesia. He manages to work out his identity just in time to be attacked by a spirit. After bringing the fight to a conclusion he moves onwards and eventually is led to a forest. Along the way, he attempts to figure out why he was sent to this realm. All he can work out is that it involves the word “Deliver”. Once there the disembodied voice returns to warn him about the realm he’s in but then reluctantly shows him the way to a city. Once there he is attacked by what appear to be living statues. Stephen heads into battle while a mysterious masked woman watches on.

UNLIKE ANYTHING OUT THERE RIGHT NOW

They don’t make comics like this like they used to. Heck, they barely made them back then. Doctor Strange: Fall Sunrise #1 is a surreal experience in the most pure sense of the word. From the visuals to the way it seems like the comic itself is participating in the storytelling, this is a reading experience that will be unique for many readers. The major theme that feels like it is trying to be presented is “being lost”. Between the amnesia that Doctor Strange is facing and the distinct lack of detail about the place he’s in, there’s a lot that is left up in the air with this issue. While this can be frustrating in a lot of comics, and it is a little here as well, the ethereal and ambiguous nature of everything feels more like a symptom of the world Doctor Strange is in and not so much a too-visible creator’s hand.

A CORNUCOPIA OF VISUALS

The star of Doctor Strange: Fall Sunrise #1 is definitely the art and colors. From the very first page, this issue is hellbent on being an artistic thrill ride. While it’s easy to say that this comic is simply surreal, that does a disservice to everything going on here. While the visuals are indeed strange and spit in the eye of realism, there are also hints of art nouveau, ukiyo-e, and even some Moebius style claire ligne graphic art. Beyond simply looking good, the art has a major role in the storytelling here. A particularly memorable moment was when it seemed like a panel depicting a forest had pulled itself down to hold Doctor Strange’s hand and lead him. It’s not all good though, particularly in the fight scenes, things get kind of muddy making things unclear as to what specific actions are happening.

BOTTOM LINE: A VISUAL TREAT, THAT MIGHT NOT BE FOR EVERYONE

Doctor Strange: Fall Sunset gets a lot of points by simply being unlike anything being put out by the major publishers right now. But, beyond its uniqueness there’s some solid storytelling and truly breathtaking art going on here. There is a bit of pretentiousness going on here that might push some people away, but for those who give it this a shot, they’ll be very pleased. 4.5 out of 5 stars.