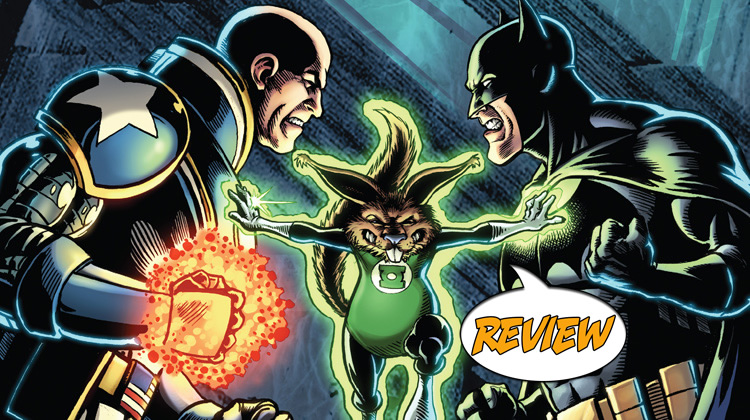 One important mystery gets solved, leading to others Batman and his group must resolve in our review of Batman: Fortress #7 from DC Comics.

SOLICITATION: Batman and his team of unlikely allies have penetrated the defenses of the Fortress of Solitude and uncovered the shocking answer that has haunted the Dark Knight from the very beginning–where is Superman? You will not be prepared for the revelation!

SUPERMAN AND HIS FORTRESS

For those of us who came in late, here’s what’s going on in this mini-series. An alien ship has disabled energy sources on Earth. In order to combat this, Batman assembles a team to enter Superman’s Fortress of Solitude since the Man of Steel is nowhere to be found. This group includes Lex Luthor (enemy of Superman), Emiko Queen (the daughter of Shado and half-sister of Green Arrow, the new Red Arrow), D’ayl (a rodent Green Lantern), and Jackson Hyde (son of Black Manta and recent new Aquaman).

After locating and entering the Fortress, the team apparently loses Jackson as they make their way through the defenses Superman has set up. There are some interesting surprises awaiting them, including a deluge of salt water from outside, an explanation for what Krypto the Superdog has been up to, and a recording from Jor-El, the Man of Steel’s father.

Of course, the group doesn’t always get along. The issue’s cover predicts the biggest conflict among them, and that’s between the Dark Knight and Lex Luthor. A lot of fans have often compared the two as the most brilliant people on Earth as well as among the richest, and they get into a huge argument over what they hear Jor-El tell his son. It’s during this exchange that the issue’s biggest shock hits, and it’s a good one, not to be revealed here!

What’s funny to me is that I couldn’t help but compare this mini-series to the first season of the recent Star Trek: Picard show on Paramount +. The first several episodes were spent gathering a group together to fly a starship for a mission the previous captain of the Enterprise needed to accomplish. This comic has followed that pattern pretty closely. Here we are, now in the seventh issue, and we finally get a big reveal as to what’s happening that Batman has been rightly concerned about since the beginning. We do find out part of the mystery, but not all, and exactly what has taken place is going to be very important to the mini-series moving forward.

I also have found the people actually brought together on this mission to be an odd collection involved. Why didn’t Batman bring more of the Justice League instead of Luthor, an avowed enemy of Superman who was president of the United States at that time? And the rodent GL wouldn’t have been my first choice, either! Granted, the planet is in deep trouble and facing a power shortage, but having to make do with this “motley crew” of a team is not quite up to the Dark Knight’s standards of planning ahead and making things work better for him. Still, we have a few issues left, so we’ll see if there are good reasons for uniting this team that Batman has had in mind.

Still, the pacing in this issue and the dialogue (including the “final words” between Batman and Luthor) are very strong as the intensity builds and revelations are discovered.

ART THAT VARIES FROM REALISTIC TO CARTOONY!

This book must have been quite the challenge when it comes to finding the best artist for it. We have all sorts of things going on, from “realistic” appearances on Batman, Lex, Jackson, and Red Arrow to Krypto (a regular dog) to the aforementioned rodent GL who talks and has facial expressions like the humans.  Then there’s the holographic Jor-El making a longer speech than I expected.

This book would have been tough for many of my favorite artists, and I’m not sure that Mr. Robinson has worked out the best. Some of Luthor’s facial expressions seem too cartoony to me while D’Ayl has seemed more realistic to me a lot of the time. This comic screams out to be an animated film at some point, though, so we’ll see!

Overall, though, I do like the facial expressions of the other characters, although Batman’s unshaven beard seems somewhat over the top. Batman’s smirk when he comes across Krypto was actually one of the few times I’ve seen the Dark Knight reveal that he’s several steps ahead of his companions.

The best action sequence in this issue took place in the initial pages, when Red Arrow saves Batman. Otherwise, this was a more “dramatic” than “action-filled” chapter. I imagine that Luthor and the Dark Knight will eventually come to blows, and likely sooner rather than later.

Many times, comics feature the final panel or page in the issue as the cover illustration. Thankfully, that didn’t happen this time—although it was very close!

We’ve still got a few issues to go before all this resolves. I actually hope that things will not end as neatly and cleanly as I think it might. Of course, the GL is expendable, but I’d rather he didn’t die—at least, not during this story!

I’m in it for the long haul, though, and I would like to see Luthor get taken out of that “patriotic” armor before long! And just what is going on in that last panel? I have some theories, but I’m hoping it’s not the obvious resolution the creative team has in store! How about something different?

The pacing in this issue and the dialogue (including the “final words” between Batman and Luthor) are very strong as the intensity builds and revelations are discovered.