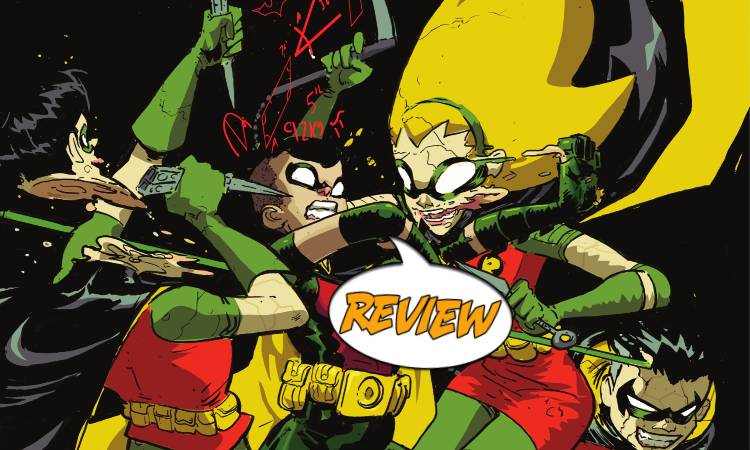 Robin is tracking a murderer, but there’s suddenly people standing in his way! And all of them are ALSO ROBIN? Your Major Spoilers review of Tim Drake: Robin #3 from DC Comics awaits!

Previously in Tim Drake: Robin:  After a mysterious murder takes place in broad library, Tim, Detective Williams, and Darcy are led to three suspects… except they aren’t real? Meanwhile, Tim’s been so busy on this case, he’s forgotten the case of the boyfriend. Where’s Bernard?

We open in the heat of battle, as Robin finds himself under attack by his own family, including ex-girlfriend Stephanie and his younger brother Damian. Or, at least, strange, melting simulacra of them, which he explains is probably a “Clayface thing.” Using his knowledge of his fellow Robins, Tim targets their weaknesses, taking down all four combatants in moments. As the police arrive to take the people inside the Robin envelopes, he realizes that one is missing, but is interrupted by Tim Drake’s boyfriend Bernard. An awkward sequence follows in which Bernard leads Robin back to his own home, apparently unaware that his boyfriend and the hero of the marina are one and the same, but by the time he sets off for class, Tim is ready to put together the clues… and the real villain is ready to fight back!

There are quite a few problems with the presentation of this issue that bothers me. There’s no context for Bernard or the fact that Robin is on his own houseboat for the first-time reader, and the lack of context matters. That said, it’s the art that is most off-putting for me. There’s a caption that indicates that “Jason Todd” is apparently meant to look like his Clayface facade is dripping, but the images make Tim look just as weird and misshapen. A moment that I think is meant to convey Tim’s happiness that Bernard calls him his boyfriend ends up looking like a horrifying Cheshire cat, with only his gleaming teeth showing in a sinister pool of shadow. Without a baseline for the character designs, it’s nearly impossible to tell fake Damian from fake Dick from fake Jason, and the last page reveal may actually NOT be who I think it is. I don’t want to disparage the style, as Rossmo’s work has been successful in Proof and other stories, but here it simply doesn’t work.

Tim Drake: Robin #3 falls prey to a number of issues, including a plot that is less a solo issue than a random chunk of the middle of a story, an almost complete lack of context for the events depicted, and art that feels very unsuited to the material, earning 1.5 out of 5 stars overall. I’d be interested in seeing the entire miniseries once it’s collected, to see if the story reads smoothly, but I won’t be seeking out the individual issues.

The fact that the Clayface monsters are nearly indistinguishable from the regular characters makes this issue incredibly difficult to look at, and important story moments are buried due to lack of context.