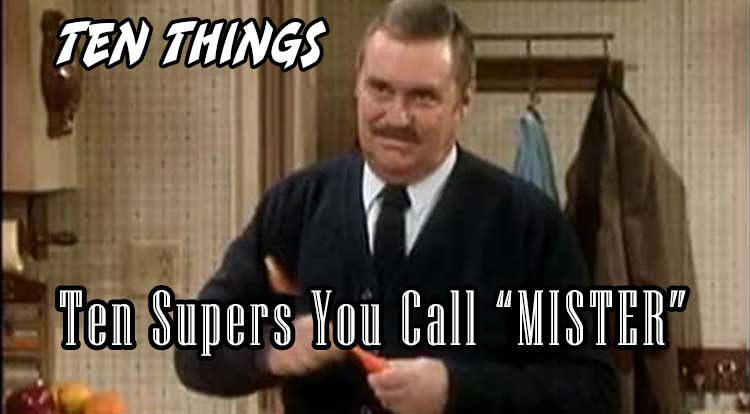 Good day. We’ve had our eye on you for some time now, Mr. Anderson. That is the sound of inevitability… The sound of Nerdery. Welcome to Ten Things: Ten Supers You Call MISTER!

Whooshman-Bicarbonate Films, in conjunction with An Amateur Comics Historian and the late Sidney Poitier, Presents: Armed with the latest science-fiction gadgetry and driving a flying-saucer-like sky-car, Mister Marvel arrives in Gotham City and easily shows up Batman and Robin. So successful is he at cleaning up the streets that Robin abandons Batman to become Mister Marvel’s partner, leaving Batman in the lurch and emotionally compromised.

You may think that Robin sounds like a complete jerk, and you’d be right, but the REAL villains of the story end up being the last people you might expect (unless you’ve read a lot of Silver Age Batman) and Mr. Marvel is never seen again. Playing the role of arrogant Superman archetype in the pages of Sidekick, millionaire playboy Walter Wensleydale is just plain a terrible person. He uses his powers for the fame and glory, all the while unaware that his sidekick Superior Boy is also the sidekick for his superhuman allies AND his worst enemy.

He has all the powers of a Kryptonian, but his weakness is that he’s as dull as a burlap sack full of doorknobs. First appearing as a member of The Society, a massive army of villains under the command of Talia al Ghul, Deathstroke, Black Adam, and for some reason The Calculator, little is known of Mister Terrible. Clearly patterning himself as a dark mirror of Mister Terrific, his highest-profile moment came when he attacked the wedding of Green Arrow and Black Canary. He was later sent to another planet for his crimes.

Sadly, he came back. A minor antagonist of the X-Men of Earth-928 in the future year 2099, Mister Entertainment was a member of the Rat Pack in the employ of the Greater Nevada Syndicate. Weirdly, their aliases and demeanor were based on 1950’s Las Vegas and his comrades included The Chairman, The Dealer, and The Suicide King. All four men were quickly dispatched by a single X-Man, which I attributed to their gimmick being a century-and-a-half out of date. Imagine a super-team based on Benito Juarez, U.S. Grant, and Japanese Emperor Meiji fighting the Avengers today and you’ll see my point. On Earth-1228, writer Stanley Lieber (AKA Stan Lee) didn’t just create the Fantastic Four: He led them! Along with Jack “The Thing” Kirby, Sol “The Human Torch” Brodsky, and Flo “The Invisible Girl” Steinberg, he battled an invasion of alien Skrulls, discovered Atlantis and still kept the books coming out on time. Given that the adventures in their comics were the adventures that they were actually HAVING on a day-to-day basis, it’s that last one that is most impressive to me. Once a member of a super-team called the Union of Justice, Wayne Miller can not only transform himself, but turn other objects into metal. He has been witnessed turning steel into gold, and possesses the durability and strength you would expect from a man made of metal. Little else is known about The Human Alloy, other than the fact that he is currently licensed and qualified to teach grade school science classes, which is kind of a super-power unto itself. These days, Archie Comics is known for their edgy content on TV and risk-taking in the comics, but there was a time when Archie was synonymous with bland, friendly, and occasionally aggressive Christian comic. Long before that, though, the publisher that would become MLJ was a hotbed of murder and mayhem. They were the first to kill one of their superheroes off, as well as providing overtly violent content in the pages of books like Hangman, and featured not only a protagonist called Madam Satan, but this purple-suited evil-puncher. Dudley Bradshaw is the proverbial rich idiot with no day job, but as Mister Satan (whose devil costume is inexplicable deep purple), he put the smackdown on evil throughout 1940.

He has not been seen since, but a certain Mister Murdock seems to owe him some thematic props. Everybody knows Mister Freeze, his cold gun and his back story, and many remember his thick Austrian accent. Educated Spoilerites might remember that he debuted under the name Mister Zero, then disappeared for decade. But a few sad souls may recall the story of Professor Thurman, whose Instant Freeze Icing Machine was stolen by a masked desperado wearing pink-and-green, who set out on a crime spree as the original Mister Freeze!

And only the really grungy nerds remember that this all took place a full two years before Mister Zero froze the streets of Gotham City. Cue Paul Harvey saying “…the rest… of the story.” Combining the uncanny with the absurd, Doctor Strongfort Stearn is the latest in a continuing line of Mssrs. Monster, with each hero incorporating the knowledge and skills of those who went before. Strongfort is more monster than many Mister Monsters, though, as his mother was a vampire.

And not just ANY vamp, mind you… The daughter of Dracula himself! As for his father, the previous bearer of the Mister Monster mantle? It is entirely unclear in his one published adventure whether detective Mister Murdo is a costumed mystery man or just a skillful guy who got involved with a murder while wearing a tuxedo. Though he is clearly skilled in combat and knowledgeable about the habits of the rattlesnake, his single recorded adventure takes place at a formal affair, and he only wears his cape on this splash page and the final panel. Indeed, Murdo seems to be his family name rather than an alias, but you have to admit, he cuts a pretty fine silhouette.

Once again, this week’s topic, Ten Supers You Call Mister, is all me, but feel free to follow along @MightyKingCobra to suggest a topic of your own! There’s always more Ten Things madness on my Twitter or check out the full Twitter archive here! As with any set of like items, these aren’t meant to be hard and fast or absolutely complete, if only because Mister Cyclops can be legally distinct from just plain Cyclops in trademark law. Either way, the comments section is below for just such an emergency, but, as always: Please, no wagering!