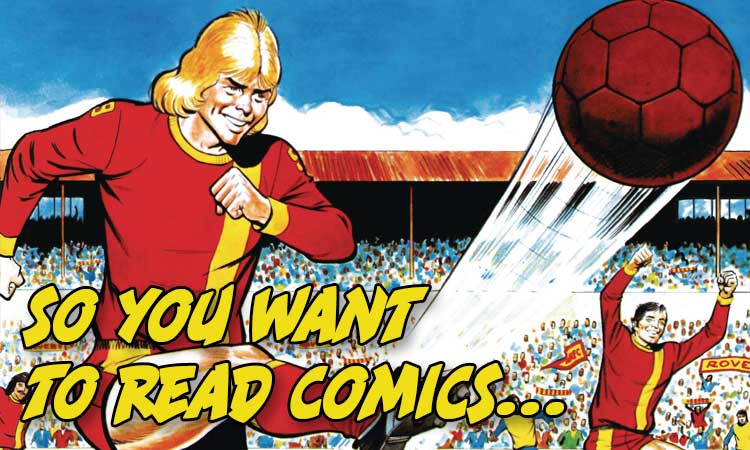 So You Want to Read Comics: World Cup Edition

We’re playing the beautiful game in this week’s “So You Want To Read Comics”.  This is our weekly feature where we take a look at a single topic or genre, then give you two comic book recommendations, perfect for new readers, based on that topic or genre.  This week, we’re looking at comics for fans of The World Cup

In case you weren’t aware, the World Cup is a massive soccer tournament, featuring national teams from all over the world.  While international soccer competitions go back to the 1800s, the first official World Cup tournament was played in 1930, then again every 4 years (with the exception of two times, due to that pesky World War II). Since its inception the World Cup has gone on to be the most watched event in the world, with viewership numbers reaching into the billions.  Beyond just being a sporting event, it’s considered, much like the Olympics, as an example of how nations from across the world can come together and compete in a relatively peaceful manner.  In its many years of existence, the World Cup has generated its fair share of legends, memorable events, and drama.

Here are a couple of comics that come close to capturing the allure of The World Cup and soccer in general.

Roy of The Rovers

Perhaps the most famous soccer based comic book in history,  Roy of The Rovers is a long running series focusing on the exploits of Roy Race who played for the fictional team The Melchester Rovers.  These included many different championship games and more than one trip to The World Cup. Starting as a feature in an anthology magazine called Tiger, Roy of The Rovers eventually went on to be its own title which ran for nearly 900 issues.  While it had plenty of drama not directly tied to a soccer match, a majority of the action happened on the pitch.  Over time the writing in Roy of The Rovers was honed so much that even the most basic of plays were written to make them all seem like game winners.  While the series was relaunched in 2016, the original ran until 1987 and is collected in many different types of collections and volumes.

Pelé: The King of Soccer

Moving from the most famous fictional footballer to arguably the most famous real life soccer player,  Pelé is a biographical graphic novel, showing the early days of the Brazilian legend’s training, into the heights of his career, which includes four trips and three wins at the World Cup, into his later years.  This retelling is more designed for younger audiences but it doesn’t leave out the more controversial and darker moments from his life either.  It’s hard to separate the majesty of the sport of soccer from its most famous players, and that of course includes Pelé and this graphic novel does a great job at explaining why.  One of the more interesting elements of this book is that while a lot of biographical comics choose a more realistic art style, this one opts for a more cartoonish style which gives it a more lively feel and keeps even the darker moments from being too depressing.

So who are you rooting for in The World Cup?  What did you think of these recommendations? Let us know in the comments section below.