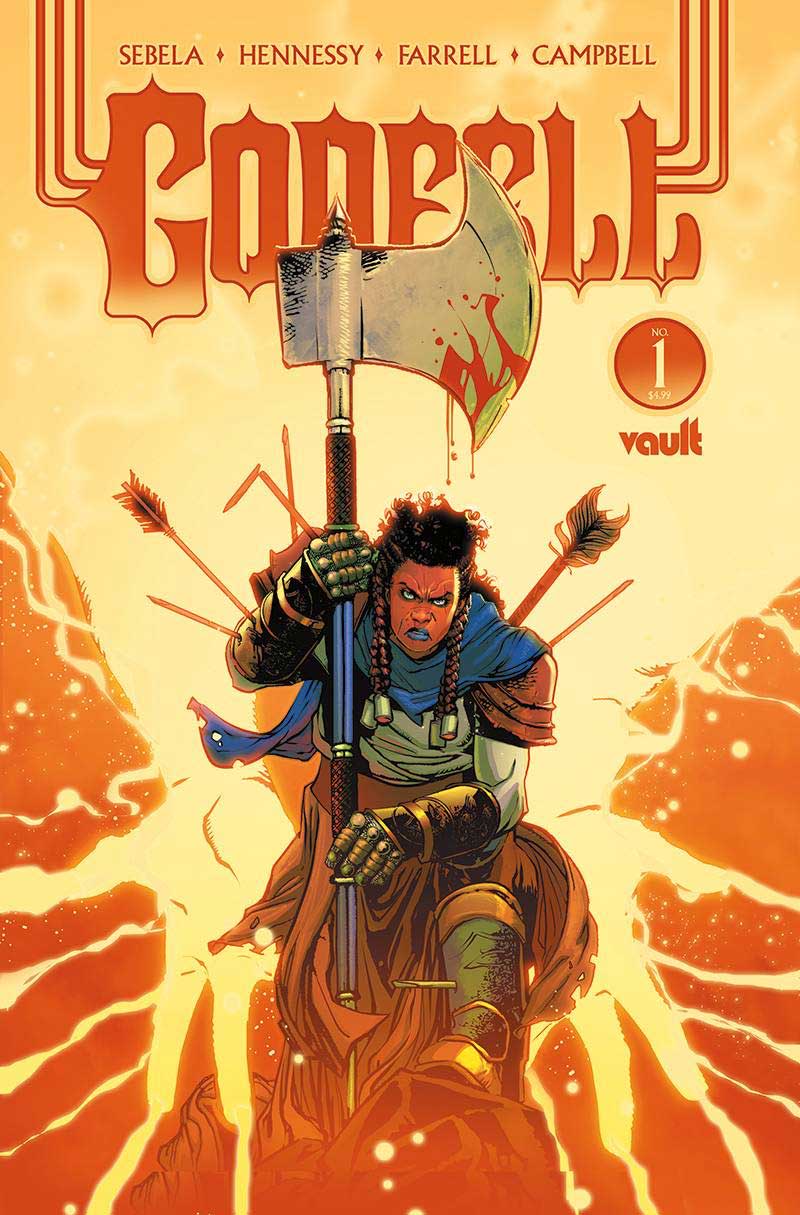 Vault Comics is moving ahead with new comics for 2023, and there are some impressive titles and creators in the lineup. BARBARIC: HELL TO PAY #1
January 2023
Writer: Michael Moreci
Artist: Nathan Gooden
Colorist: Addison Duke
Letterer: Jim Campbell
Designer: Tim Daniel
Cover A & B: Nathan Gooden
Synopsis: Barbaric is back and headed straight to hell in an all-new arc so big and bloody, it’s getting an extra issue! While Owen tames a dragon with an old friend, Soren and Steel cross paths with someone else from our cursed barbarian’s past…who isn’t looking nearly as friendly. Hell hath no fury like a woman stabbed through the heart by an ugly f***ing orc.
Oh, wait! Who’s carrying Axe? Writer: Christopher Sebela
Artist: Ben Hennessy
Colorist: Triona Farrell & Vittorio Astone
Letterer: Jim Campbell
Cover A: Ben Hennessy
Cover B: Nathan Gooden
Synopsis: One sunny day in the land of Kerethim, God falls dead from the sky. The impact sends out shockwaves that draw in royal families at war, shadowy creatures of the dark, and armies of the dispossessed, all coming to lay claim to parts of God’s body. Into this power struggle wanders Zanzi Vuiline, a soldier and berserker trying to get home from a years-long war. Forced to fight her way through the strange landscapes in and on God’s corpse, from the soles of its feet through the top of its head, Zanzi will acquire a mysterious traveling companion on her own pilgrimage. THE NASTY #1
March 2023
Writer: John Lees
Artist: George Kambadais
Letterer: Jim Campbell
Designer: Tim Daniel
Cover A: George Kambadais
Cover B: Sally Cantirino
Synopsis: Eighteen-year-old Thumper Connell still has an imaginary friend: the masked killer from his favourite slasher film. Thumper is obsessed with horror and always has been. He fills his time with scary VHS rentals and hanging out with his fellow fans, The Murder Club. But everything changes when his local video shop acquires one of the notorious films known as “video nasties” – films so scary, they’re the target of the British Moral Decency League’s crusade to ban and burn. But it’s only a movie, right? It’s all just imaginary, isn’t it?
A story about the perception of evil, the power of genre, the love of fandom, the need to create art, oh, and crap-your-pants TERROR!” SONGS FOR THE DEAD: AFTERLIFE
March 2023
Writer: Andrea Fort & MC Heron
Artist: MJ Erickson
Colorist: Addison Duke
Letterer: Andworld
Cover: MJ Erickson
Designer: Tim Daniel
Synopsis: Bethany is a necromancer and a hero. Along with her companions, Elissar and Jonas, she has finally found the rumored covenant. Her Perilous journey has brought her to the last bastion of the necromancers, but resurging prejudices have them in shambles. Can Bethany unite them in the face of escalating tensions? Or will the coming war shatter all of her dreams for a peaceful future? MONEY SHOT COMES AGAIN
April 2023
Writer: Tim Seeley
Artist: Gisele Lagace
Colorist: Carlos Badilla Z
Letterer: Crank!
Designer: Tim Daniel
Cover A: Gisele Lagace
Cover B: Tim Seeley & Tim Daniel
Synopsis: The XXXplorers are back and on their hands and knees for the good of humanity! When the giant ass space jellyfish who run the ordered universe arrive on earth, the porn-stars-cum-science explorers must put away grudges, crushes and side hustles to once again take one or two or three for the team. Begins an epic new arc, which takes aim at dumb billionaires and bad optics, and guests stars a LEGENDARY underground comix heroine! NEW ARTIST Gisele Lagace puts her sexy spin on the book!