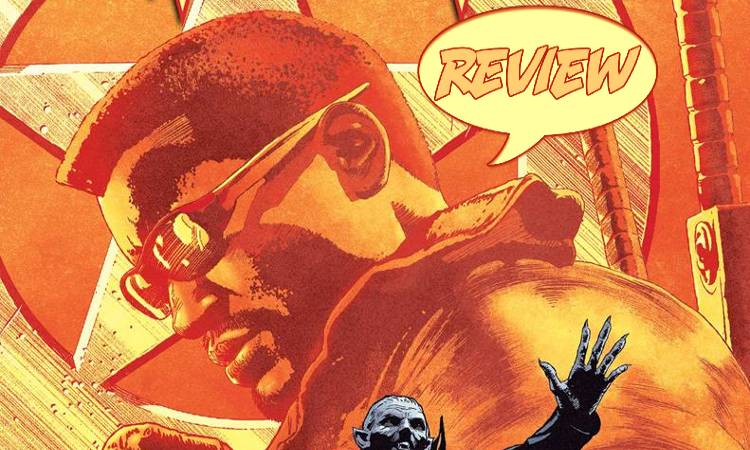 The undead have founded their own nation, but will it all come tumbling down before it gets started? And will Blade be its savior or its doom? Your Major Spoilers review of Blade: Vampire Nation #1 from Marvel Comics awaits!

Previously in Blade: Vampire Nation: An assassination threatens to unravel the fledgling country and spread chaos throughout the world. But is getting rid of a nation full of bloodsuckers really all that bad of an idea?

Blade himself isn’t too sure…

A SHARK WILL ALWAYS BEAT A DRACULA

In the city of Vampyrsk, located in the still-irradiated zone left by the Chernobyl disaster, a horde of armed and armored humans are on a mission. Seeking out a particular crypt, they expose the vampire within to the light of the sun, killing him almost immediately…

…but it turns out to be the WRONG vampire. The hit did take out one of Dracula’s council of vampires, but that functionary was acting in the stead of the man himself, with the attempted murder meant to kill ol’ Vlad himself. That’s when the sheriff of Vampyrsk gets involved and Blade is as good at the new method of hunting vampires as he was as the old one. Realizing that one of the “mercenaries” involved in the hit is unaccounted for, he unravels the threads of conspiracy and finds a centuries-old vampire called The Contessa. Even though she’s used to back-and-forth of power and influence, well-versed in using her money and noble status to make people do what she wants, she has forgotten one important thing about the modern world: The paperwork.

BUT WHAT IF THE DRACULA IS A SHARK?

Blade’s detective work in this issue is interesting, but of the four major moments that solve this mystery for him, only one is due to his actions. The others literally fall in his lap, and while it’s very interesting to see how a vampire society might hypothetically function, the issue ends in the way that I expected it to. The actual prime mover behind the entire conspiracy was obvious to me from the beginning, which does somewhat undermine the noir underpinnings of this detective story, and while the things that are unique to Blade  (like his staking the hell out of Contessa’s would-be enforcers) aren’t exactly central to the plot. Wachter’s art is well-suited to the task of showing us a weird undead parody of real life, but there’s a sketchiness to his facial expressions that damages some dramatic moments. Even with those issues, though, this overall synthesis of art and story is good, and the setup for more weird little vampire stories is compelling.

All in all, Blade: Vampire Nation #1 is a better-than-average story that works more often than not, and even if I saw a twist or two coming, they were twists that left Blade, Dracula, and the denizens of vampire country in a more interesting place, earning 3 out of 5 stars overall. Perhaps the best part of it all is the strained-but-almost-friendly interactions between the odd couple of Blade and Dracula, who are clearly destined to kill one another but are clearly forced to coexist, hammering home the noir aspects of it all.

What was clearly intended to be a byzantine mystery is pretty clear from the beginning, with our main character feeling like he's along for the ride, but it's an okay comic.