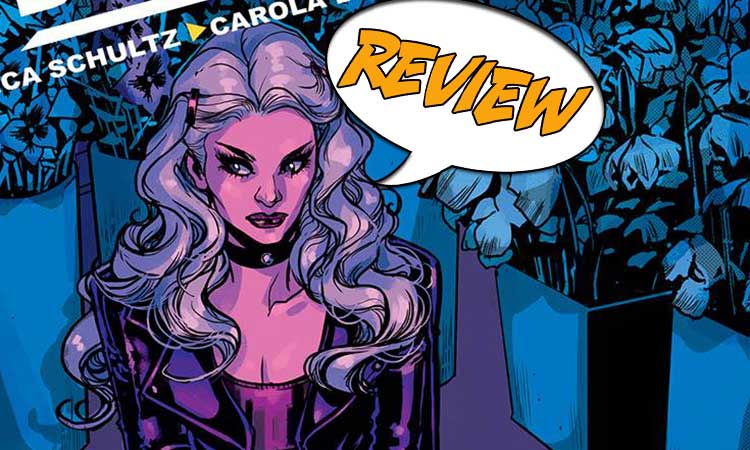 Jasmine’s murder remains a mystery. Both the girls and the police start to question the money motive, but are either of them learning anything that helps them figure out what happened and why? Find out in The Deadliest Bouquet #4 from Image comics!

Previously in The Deadliest Bouquet: Rose, Poppy, and Violet learn that the gun that killed their mother might be linked to the death of James Asmus, someone none of them knows. Rose also reassures her sisters that their father’s body was moved years ago. They return home to find the door unlocked. Instantly they go into defensive mode and discover that the intruder is Derek, Poppy’s husband. Derek is starting to realize there are things he does not know about Poppy. Poppy wants to keep her children safe. They get into a fight until Violet surprisingly steps in, urging Poppy not to put her own kids through what they went through.

TO TRUST THE POLICE OR NOT?

Violet goes out with Detective Bayani, and The Deadliest Bouquet #4 opens the morning after. Violet quietly untangles herself and leaves. Bayani hears her go and calls Detective Gutierrez, asking her to meet him at the station even though this is her day off.

Poppy and Derek also wake early. Poppy explains that she missed his call and was late picking up Holly because she was boxing. It is her secret hobby. He wonders at her never having bruises and she claims it is because she never gets hit. A scream from the children’s room gets everyone’s attention. They were playing. Holly told Aster to look in a drawer and they found a set of bloody wraps. In a flashback we see they could have been either Poppy’s or Violet’s. Poppy puts off further discussion and sends Derek and the kids out for breakfast.

At the station, Bayani admits he managed to get the name of Jasmine’s C.P.A. and they now have a stack of financial records to look through. Bayani also wonders more about the old gun and whether there is any possibility that it belonged to Jasmine.

Rose calls her sisters in for a chat and tells them she disposed of their grandmother’s gun. She does not want Asmus’ murder pinned on their mom. Then she coaxes Violet into telling them what she learned from the detective. After telling him she beat up the biker gang for extorting Jasmine, he tells her that the gang does not operate in this area. They have still been operating under the assumption that robbery was the motive for Jasmine’s death, but what if it was something else?

There is an interesting montage of the detectives and the daughters reviewing facts they know about the case. Panels alternate between them, so we also get a sense of what evidence each group knows and what they have been withholding from the others. The focus turns back to the women as Rose and Violet argue over whether to believe the police detective about the gang. Again, this conflict runs deep into the past when Violet’s troubles would bring punishment on all the girls.

The art in The Deadliest Bouquet #4 spends much more time giving us glimpses of the past. These are set apart by fading the coloration just enough that they stand out from the main storyline. We start to see how deep the women’s training goes and how demanding their childhood was. Was their mother paranoid, or was she a perfectionist? In so many ways, her decisions in training them have led to their ongoing conflicts today.

The faded past and bright present techniques in coloring are joined together in the speculation montage, and what is really cool about this is that both groups alternate in sharing some of the same scenes, for example, when they each wonder about the Asmus murder in turn. For the police, if money was not the motive, what was? For the girls, they do not believe that Jasmine could have been surprised. But it does not seem possible that this could have simply been a random murder.

BOTTOM LINE: THE MORE WE KNOW, THE BIGGER THE MYSTERY

The Deadliest Bouquet #4 rambles a little, but it seems clear that the obvious gang shakedown motive is just a red herring. Jasmine had a long and complicated past, but perhaps we are closing in on the solution.

Will conflict between the daughters distract them from focusing on the truth?