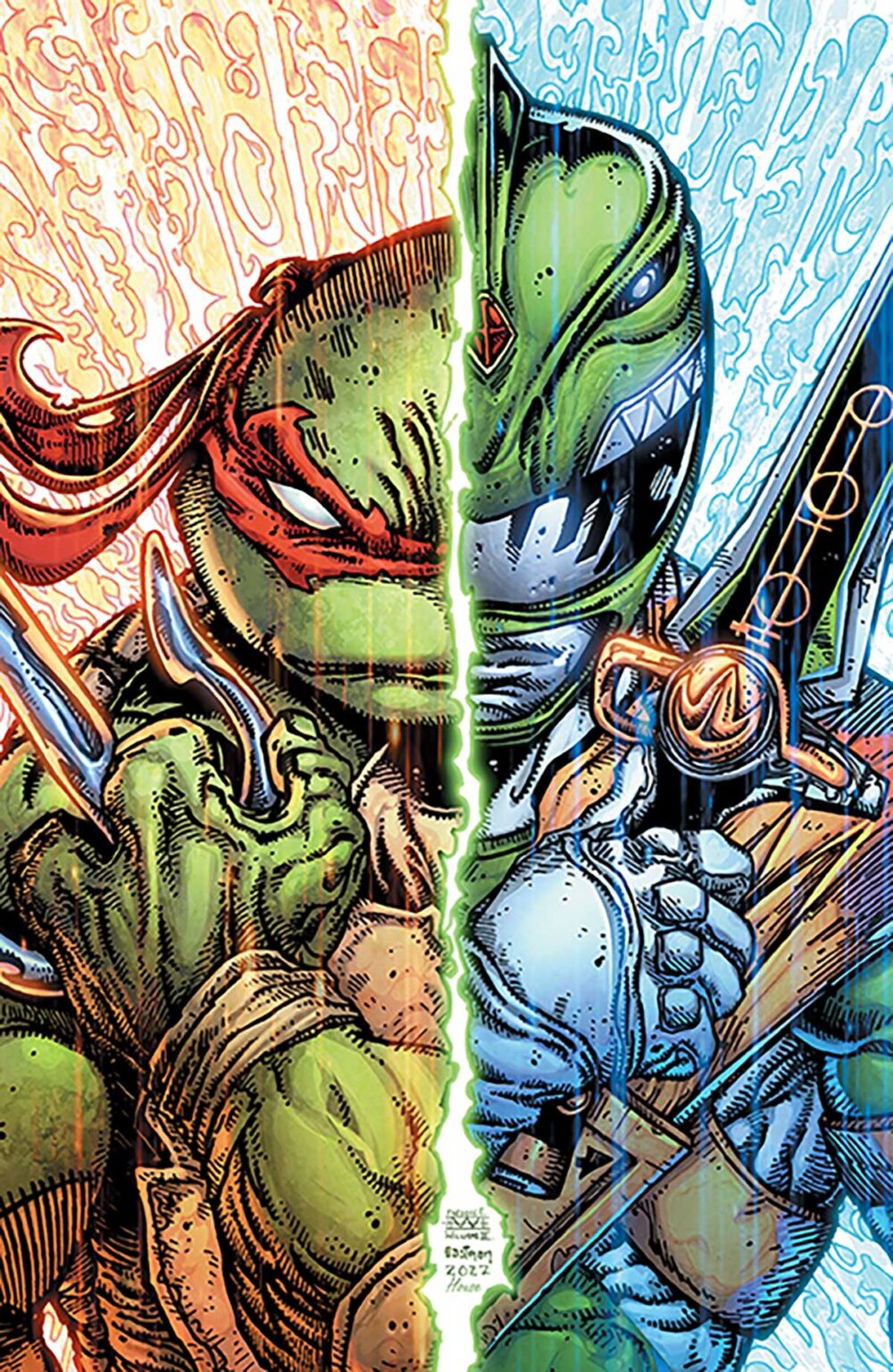 There’s nothing to fear in the quaint town of Harrow, New York–except, that is, for the Harrower.
The children wish this boogeyman was just an urban legend, but this purveyor of puritanical vengeance against the unrighteous is very real, and there’s no escape, because the Harrower seems unkillable, and spans generations, always returning…
What secrets will Alice Young, a teenage girl obsessed with the Harrower, uncover, and will she be able to escape the pull of her morbid fixation?
This deconstruction of the slasher genre is the fresh and terrifyingly grounded take is perfect for fans of
Bone Orchard and The Closet!

It’s the final hour for Erica as she has no choice left but to face the Duplicitype and save Tribulation from its reckoning.
But Cutter’s looming arrival isn’t the only thing competing for the rogue Black Mask’s attention.
Gabi has her own plans–ones that put her in grave danger.

Alone after barely surviving a monster’s massacre, Sunny is elusive to Jace–but not the White Masks!
Caught up in the business of the White and Black Masks, will Sunny join Jace’s former house, or be left in the woods to face the same horrors again? The master of horror returns to comics with this fresh reanimation of a horror classic! The iconic R.L. Stine is joined by artist A.L. Kaplan (Maw, Jim Henson’s The Storyteller) in this twisted retelling of Frankenstein.
You might be familiar with the story of a mad scientist hell-bent on creating life, but these two demented brothers made something else entirely!
Horror lovers won’t want to miss this imaginative retelling with more than a few twists, as R.L. Stine takes on one of the most iconic stories in horror history!
Collects Stuff of Nightmares #1-4.

As Mosely reels from the recent events that bestowed the Holy Hammer upon him, he’s overwhelmed by the legions of “upgraded” civilians, with Robo-Enforcers hell bent on keeping the digital status-quo in place.
Mosely finds himself with more tangible foes, but a daunting task–wreck the three robo-gods that run the city from their towering pyramids and… deal with the return of someone special from his past?
Beginning here, each issue includes a bonus story written and drawn by Rob Guillory for wall-to-wall content!

Due to her addiction and hallucinations, Elise grapples with the worst possibility–is she the killer?
Her bouts of super-strength aren’t providing any comfort from these suspicions, especially as the horror of the next victim greets her!
Things are more tense and deadlier than ever as each remaining billionaire receives an anonymous threatening message…

Grey and Wren return to where it all began–the birthplace of the Behemoths.
But a figure from the past still pursues them, deadlier than ever before, leaving a trail of blood in their wake… The Apocalympics begin, but it isn’t fun and games–the Wasteland Rangers won’t let Maceo, a rival suitor for Mezzy, go without competing to the death!
The stakes are high as Mezzy’s close connection with The Rangers’ Chieftess is revealed and Maceo seems out of his league.
But there’s more than one way to save someone… In the midst of Ted still being a suspect for murder with the town against him, a sequence of events following Skunk’s disappearance could change things forever.
But what consequences will one final wish have for Ted and Kenny’s present?

Reaching the old terminal might be the only hope for the survivors, but the blizzard is just as deadly as the monster, and there’s no way out but through.
Abi struggles to be a leader for the passengers, but can only pray that the storm is enough to deter the creature that stalks them as well… Dueling demons have become a staple of underground life, while a brutal tragedy’s silver lining might have brought Ellie a golden advantage in the infernal prize fights.
Meanwhile, Ellie and Dora reckon with their own internal demons, and Ellie makes necromantic plans that could spell massive changes for the underworld.

As Eve comes to horrific realizations about her sister, she feels more conflicted than ever as her sister’s changes along with her mysterious companion may be part of what it takes to save the Earth!
On the surface, civil war brews to a boil, with Selene and her faction of children pitted against Eve and her companions…

What happens when people are on the brink of dying–need to die–but can’t?
Jess feels at fault due to the sequence of events surrounding her, but far from it; she’s the only one that can help.
But she’s not the only contender for the Throne of Death!

New players are added to the board as the Power Rangers continue their frantic search for their missing Green Ranger. Meanwhile, the Omega Rangers have encountered perils of their own…
In a perilous hunt for THE DEATH RANGER, is help from one of the Power Rangers’ most twisted enemies the advantage they need, or are they being led into a trap? It began with questioning the Gods. It ends here… once again… at the edge of the universe.
Thierry-9, an A.I. cultured from the corpse of God Malik, awakens face-to-face with Jason Hauer, now a shell of a man at the end of his life.
Their conversations lead Thierry-9 on a journey through space, time, and Malik’s memories, retracing the fateful flight of the Vihaan II on a quest to discover—once and for all—the origins of the Gods.
The lines between humanity and the divine blur even further as we hurtle towards the conclusion of this Eisner-nominated interstellar series from acclaimed writer Al Ewing (Immortal Hulk) and artist Simone Di Meo (Mighty Morphin Power Rangers).
Collects We Only Find Them When They’re Dead #11-15. When a Ranger is forced to make a decision that will forever change the Power Rangers, what will their legacy become? As stories end and converge, and new beginnings arise, join the Power Rangers and kick off a brand new journey!
News of a deathly threat reaches the team—one that threatens every Ranger, Earth, and even a home long since destroyed. As the climactic battle against unspeakable enemies unfolds, the lines between friend and foe blur, and difficult decisions await even the strongest of Rangers.
The epic culmination of a story years in the making… and as with all endings, a new beginning!
Writer Ryan Parrott (Go Go Power Rangers) delivers the final issue on the main series, joined by a superstar lineup of returning artists including Dan Mora (Once & Future), Marco Renna (Power Rangers), Moisés Hidalgo (Dark Blood), Hendry Prasetya (Wonder Woman: Agent of Peace), Daniele di Nicuolo (Seven Secrets), Eleonora Carlini (Marauders), Francesco Mortarino (Dune: The Waters of Kanly), Miguel Mercado (X-Force), as well as writer Melissa Flores (The Dead Lucky) and artist Simona Di Gianfelice (All-New Firefly) on issues 101-102!
Collects Mighty Morphin Power Rangers #100-102.

It’s SHREDDER vs. RANGER X as the battle goes underway and Rita’s armies are a powerful match for our de-powered heroes!
Unlikely alliances and unlikely sanctuaries abound as the Rangers and Turtles, specifically Billy and Donatello, put their heads together and create a secret weapon.
But the problem is… it might change them in ways they can’t come back from! Discover the secret history of the War of the Spark in our multiverse, as revealed by the resurrected Jace Beleren!
Meanwhile on Amonkhet, Liliana, Garruk, and Chandra are trapped and have to watch helplessly while Ral is coerced into inaction while the man he loves is in danger.
But a betrayal from Nahiri complicates things, while a mysterious partnership is revealed to be behind it all…

While Gurney sings blasphemous songs in defiance of the Baron, who grows weaker from his stubborn affliction by the day, the fruitless production of artificial spice continues to infuriate Fenring and Shaddam, and a hidden stash of organic spice further complicates things.
Meanwhile, Duke Leto is watched from afar by a person of untold significance for his future and lineage…

Will Buffy and Giles finally put to rest what’s unfinished between them?
Buffy is still without her powers, and it will take help from Faith and a stubbornly insistent Xander and Spike to win this fight.
But facing Willow is something she must do alone… WILLOWVERSE continues as Buffy still struggles with her powerless predicament, feeling envy and frustration as her sense of purpose is lost with the existence of the new Slayer. But there are more pressing problems…
Both separately and together, the gang will face strange and monstrous enemies, including a restaurant-owning demon with hunger for human bodies, and an even more menacing demon with a speciality in feasting on Slayers! Will Buffy be able to escape from her web without help?
Writer Sarah Gailey (Eat the Rich) along with artists Sonia Liao (A Spark Within the Forge) and Claudia Balboni (Fairlady) continue the journey of a new Vampire Slayer!
Collects The Vampire Slayer #5-8.