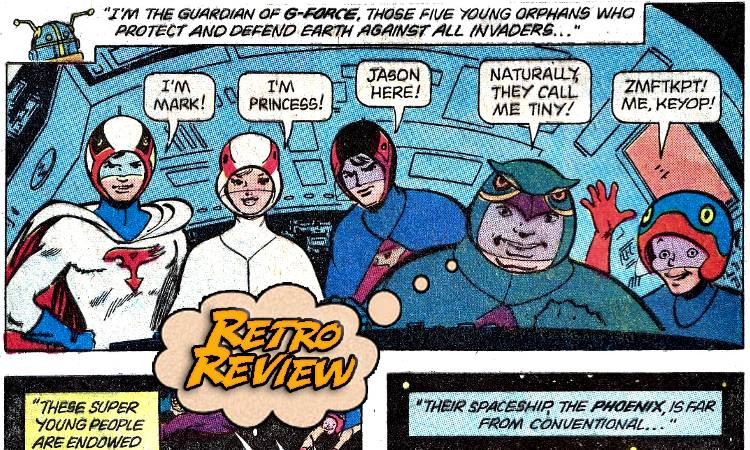 Always five! Acting as one! Even in a bizarro out-of-character adaptation! Your Major Spoilers Retro Review of Battle of the Planets #1 awaits! BATTLE OF THE PLANETS #1

Previously in Battle of the Planets: If you grew up in the ’70s, you might have the same memories I do – memories of Gold Key “funnybooks” on spinner racks and in grocery stores everywhere. But the story of Gold Key can’t be told without momentarily jumping back to the dawn of the Golden Age of Comics, several decades earlier.

It was 1934 when Dell Comics published the first issue of Famous Funnies, but not long afterward, Dell partnered with a company called Western Publishing. Western provided the actual material that Dell printed, including stacks and stacks of licensed comics featuring Disney characters, TV show adaptations, movie tie-ins, and more. In 1962, though, Western and Dell parted ways, with Dell ceasing comic publishing in 1974. Western, on the other hand, created their own comic line in Gold Key, including a number of titles previously seen under Dell. As with Dell, Gold Key was (you should excuse the expression) a gold mine of licensed properties, including the book of the cartoon that would inspire one of the longest-running TV franchises in the modern world. Generation X kids like me may remember Battle of the Planets better as G-Force, the English name of the super-team known in Japan as Science Ninja Team Gatchaman. This issue kicks off with 7-Zark-7, the robot narrator of the cartoon, explaining the premise of the comic we’re about to read, as happened with the syndicated show. Zark then gets an emergency message and sends the G-Force team out to fight a giant crab. (If only Fred Schneider were here to help!) While the heroes are busy with Zoltar’s beast, the evil overlord himself kidnaps 7-Zark-7!

Or at least, they think they do, as the real Zark had a decoy set aside for just such an emergency, with a tracker so the heroes can follow Zoltar to his lair. Now, why an alien overlord would be hiding out in a castle in the desert is unexamined, but this book isn’t really about examination. It’s about entertaining 9-year-olds for twenty minutes or so, but the abrupt ending of the first story seems like it might not even do that. That’s not to say it’s not an attractive comic, as Win Mortimer does interesting illustrations that keep the characters recognizable, but… even by Battle of the Planets standards, this one is a weirdie. For one, most of the issue features the team in their ship, the Phoenix, like the crew of the Starship Enterprise. Their only sorties out of the ship are in individual fighter jets (all of which are visually based on Mark’s craft, the only fighter jet seen in the animated series) and that one battle sequence in the Sahara. In the second feature in this issue, the entire story is ship-to-ship combat between the Phoenix and another Spectran giant robot, seemingly based on the Space Terrapin from the first American episode. And how do we deal with the giant alien threat from beyond space? The ol’ PEWPEWPEW, that’s how! It’s a pretty common tale in the Gold Key line, though, as the consistency of the line was in getting the books OUT on time, not in fealty to any hypothetical source material. But 1979 was the beginning of the end of Gold Key, as the company was purchased by Mattel, Inc., which essentially ended newsstand distribution and began selling Gold Key books almost exclusively in plastic 3-paks found in your local department store. This led to huge accessibility problems, with books like The Black Hole #4 being incredibly rare in the wild, with Gold Key ceasing operations in 1984. All in all, though, even though I’m a huge proponent of the original cartoon (and its source material, whose “five-helmeted-heroes-in-color-coded-suits” motif helped inspire Super Sentai and, by extension, Power Rangers), Battle of the Planets #1 isn’t a particularly quality example of Gold Key’s output, with a mostly nonsensical story, decent art, and slapdash coloring adding up to 1.5 out of 5 stars overall.

My interest in this book is about 75% historical, and while I own it, I couldn’t in good conscience tell you to spend thirty-four dollars on your own copy.

BATTLE OF THE PLANETS #1

It's interesting to see what an adaptation of a regionalization of a translated show turns into, but aside from some attractive art by the always-welcome Win Mortimer, it's mostly interesting for historical reasons.