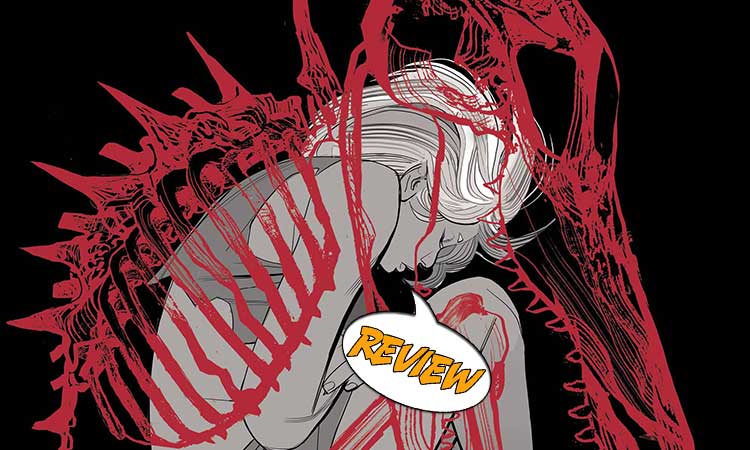 In a colorless world, a young man will meet someone, someone who’ll make him start seeing things differently.  Your Major Spoilers review of Kroma #1 from Image Comics, awaits!

Previously in Kroma: After a great calamity left only one city left on earth, the last humans have survived by removing color from their lives.

A CITY WITHOUT COLOR

Kroma #1 opens with a colorful bird flying in the air, before being attacked by a bigger bird who kills it.  Its corpse falls in front of a child named Zet.  Things then move forward and a teenage Zet is with his friend attending a ceremony where the people of his city hunt a “demon” that was captured.  During the hunt Zet notices that the demon isn’t exactly what everyone thinks it is.  Zet is troubled by what he saw and decides to visit the demon, where he discovers it’s actually a young girl wearing a costume.  The next day Zet and his friends are taken into the wilds outside the city where they encounter the giant lizards that inhabit the world. Zet begins to have doubts about things and decides that he should show the young girl more colors of the world.

My first impression after reading Kroma #1 was just how effectively it establishes the world it exists in.  While the parts where the world’s backstory is revealed can be considered info dumps, they’re disguised as in-world events that feel natural.  They also pull double duty in that they establish a sort of mystery, not by being deliberately obtuse or abstract, but by being events interpreted by a more primitive people.  What’s also impressive is that while it manages to get a lot of backstory in, it doesn’t do this by sacrificing on forward momentum.  Things move quickly in this issue and by the end of the issue, things are in a far different place than where they begin and it’s fun to see them unfold. While of course there’s plenty of time for this to change, I will say that things are a bit black and white (excuse the pun) here.  The characters the readers are supposed to root against are very outwardly sinister, while the protagonists are a bit bland in their innocence.

FINALLY A REASON FOR THIS

Black and white comics with selective splashes of color, is a gimmick that has been beaten to death, a few times over.  But, Kroma #1 manages to find a way to utilize this style in a way that actually impacts how the comic is read. The color utilized in this issue is reserved for scenes taking place outside the city and is almost garish and overwhelming, but only in contrast to the complete lack of color within the city.  So, much like the characters who are seeing some of these colors for the first time, they’re intense and almost unsettling.  This contrast between color and black and white extends to other parts of the comics as well.  In particular, the onomatopoeias that are perceived to come from something outside the city are colored, while others aren’t. It’s just a small detail that helps create a more interesting reading experience.

BOTTOM LINE:  A SMART COMIC BOTH IN WRITING AND ART

Kroma #1 takes a single idea, a world divided between color and black and white, and utilizes this to craft a comic book that has both an interesting story and impressive visuals.  Some lack of depth in the characters keeps this from being perfect, but it should definitely be checked out.  4.5 out of 5 stars.

Kroma #1 is a strong introduction to a world that has a lot of interesting lore and elements in it. What’s fun is that these things are explored not only with the writing but visually as well.