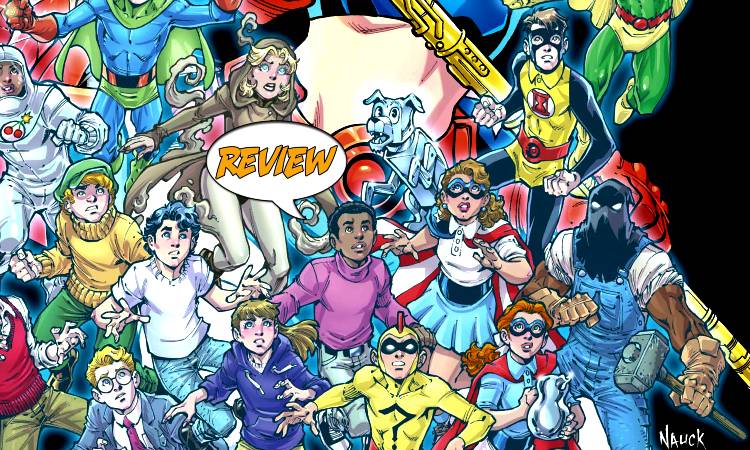 Where are the sidekicks of years past? And, more important, who or what is the Childminder? Your Major Spoilers review of Stargirl: The Lost Children #1 from DC Comics awaits!

Previously in Stargirl: The Lost Children: When Stargirl of the Justice Society and Green Arrow’s ally Red Arrow discover a tragic teenage hero from the past has gone missing, they set out to find him…only to discover he’s not the first teenage hero of the Golden Age to have vanished without a trace. But where have they gone? Who are they?

And who or what is the mysterious Childminder?

WHERE HAVE ALL THE CHILDREN GONE?

Stargirl: The Lost Children #1 opens with an elderly Daniel Dunbar, once the boy sidekick called Dyna-Mite, partner of TNT. Though he understands why people consider sidekicks to be silly and passe, all he remembers of his days as a caped crusader was the fun, the excitement, and the feeling that he was very lucky. In the present, Danny is an old man deep in a web of conspiracy, working on an investigation that came during his attempts to write a book about his days as Dyna-Mite. Over in Nebraska, though, Courtney “Stargirl” Whitmore is engaged in a similar pursuit, seeking out the whereabouts of Wing, the lost Soldier of Victory, alongside Emiko Queen, The Red Arrow. Their mentors don’t seem to understand their insistence, but even if it means grounding, Courtney is determined to figure out what happened to the Crimson Avenger’s lost pal.

That’s when their investigations start to come together…

One of the specific themes of Geoff Johns’ work is taking a real-world argument or belief and making it the centerpiece of a story. We saw it with 2011’s Aquaman reboot, which called out the “talks to fish” jokes, and with his reworking of Captain Marvel/Shazam. It’s an approach fraught with problems, but this issue avoids most of them by focusing on the characters first. Dyna-Mite’s real-world history helps pull this all together, while Courtney’s side of things makes it clear that the pre-Flashpoint reality is restored… with a few changes. There are some brand-new sidekicks to be found in these pages, all of whom were previewed in The New Golden Age #1 last week and all of whom feature cool, retro Todd Nauck designs. Truly, his art is the star of the issue, featuring a more finished line than I remember from his days on Young Justice. The TNT adventure/reminiscence that takes up the first act is truly wonderful, creative stuff that feels like a lost Golden Age story with modern production techniques.

BOTTOM LINE: BETTER THAN I HAD HOPED

The last page features a truly shocking moment for Mister Dunbar that makes me want the next issue RIGHT NOW, giving Stargirl: The Lost Children #1 the best possible recommendation I can provide, with strong art and a fun story earning 4 out of 5 stars overall. I’m leery of Johns’ writing, as he hasn’t delivered a satisfying ending in a LONG time, but this one at least makes a great first chapter.

The last remaining Soldiers of Victory search for the lost Wing, while the Danny The Dyna-Mite finds out why you have to be carful what you wish for, all with energetic Nauck Art.