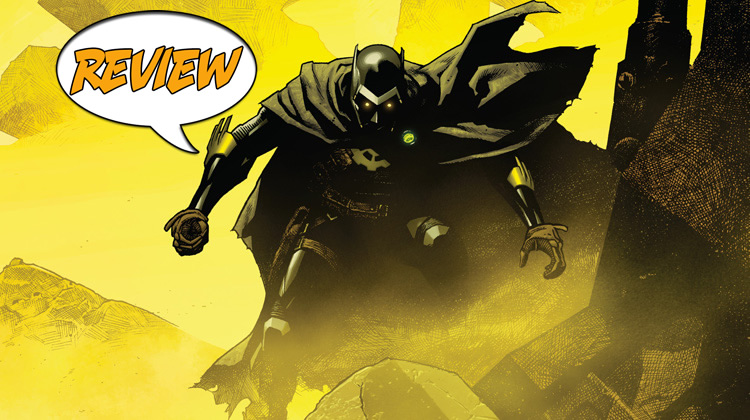 Would Batman/Bruce Wayne be happy if he were separated into two different parts? Take the jump for our review of Dark Crisis: Worlds Without a Justice League – Batman #1 from DC Comics.

SOLICITATION: When Pariah and his forces of the Great Darkness laid waste to the most powerful superheroes of all time, all hope was lost… until now. To power his weapons of war, Pariah has captured each member of the Justice League and trapped them on worlds suited to their every dream and desire… while the planets themselves slowly eat away at their respective inhabitants. Batman is stuck in a loop wherein the greatest detective must solve the mystery of his own existence! Plus, unravel the secrets of Zatanna’s world in this final epic chapter of the WORLDS WITHOUT A JUSTICE LEAGUE saga!

I’m always interested in explorations of Batman’s character in these “alternate universe” stories. This one, set in the Dark Crisis framework, looks at the two separate personalities in the Dark Knight—Batman and Bruce Wayne.

This tale makes the average Batman story seem “bright” by comparison. The world has basically been decimated by a Joker virus, leaving only Gotham City as the last city on Earth. Looking over this paradise is Mr. Wax, otherwise known as “The Architek.”

At the same time, there is a shadowy figure dealing out justice called “The Night.” (I am so reminded of Kevin Conroy saying those words whenever someone calls his that, by the way!)

Eventually, of course, the two meet, and there are surprises to be discovered! Both are shocked to find out that they are more similar than even twin brothers could be! I particularly enjoyed the fact that Bruce wears white while The Night wears mostly black. This was a visual representation of what each personality represents in Batman.

We also see what some friends and foes of Batman have been doing, and it’s not good! Robins have been replaced by “Redbreasts,” completely pliant assistants. Jonathan Crane is still an experimenting scientist, and even Victor Szasz makes an appearance!

I won’t spoil what’s going on behind the scenes, but it makes perfect sense to this long-time Bat-fan!

This question about Batman—would he be happy if he simply turned away from his quest for justice—is something that will always haunt the Dark Knight. In this “alternate” version, Bruce actually constructed and maintained a tremendous city of the future.

Of course, the darker side wants its due, and he’s in the shadows, seeking out the bad guys and girls, and without Bruce’s sensibilities, he makes sure nothing and no one gets in his way. I don’t think just being Batman would be enough for him, but that dichotomy will continue to interest fans for years and years to come, I believe.

This story ends really the only way it can, and it was a fascinating exploration of the two sides of Batman.

The second story wraps up the entire “Worlds Without a Justice League” event, and it centers on Zatanna. We see the various versions of her, an appropriate guest star or two, and see how things are about to resolve in the DCU. Very nicely done!

The two very different stories in this book utilize art that is most appropriate for each. I hope this isn’t the last time we see Ryan Sook on Batman because he did a stellar job of creating both sides of the Dark Knight, from the “bright knight” side to the darker, more obsessed part of him. The action sequences were perfect for each “side,” with Mr. Wax’s more “heavenly” surroundings versus the much more scattered and scarred arena that The Night functions in. I also liked how the facial expressions worked for each, so it was an ideal pairing of art and story.

The second story featured art from Dan Jurgens and Norm Rapmund, and it had a much more superheroic feel to it. Jurgens is always terrific whether he’s writing or drawing, but we just don’t see his artwork as much as I would like, so I treasured seeing him work with Rapmund to handle a much more “magical” setting. Just perfect for a comic book!

BOTTOM LINE: Back to Business!

The cover refers to him as the “Last Knight Standing,” and it’s an appropriate choice of words! The Night is the final dark hero in this Batman-ish world, and it’s a great psychological exploration of the hero and his two different sides. I enjoyed seeing Si Spurrier, who often writes for Marvel heroes like the X-Men and the Black Knight, taking a shot at Batman! Hope it isn’t the last time I get to see that!

The Zatanna team are the ideal way to end up this part of the “Death of the Justice League.” It’s magical, it’s superheroic, and it’s a great way to conclude this portion of what’s going on so we can return to the main event in future books! However, even if you hadn’t read any of the previous entries in the “Worlds Without a Justice League,” you’d still enjoy these stories, I do believe! Worth the price of admission!