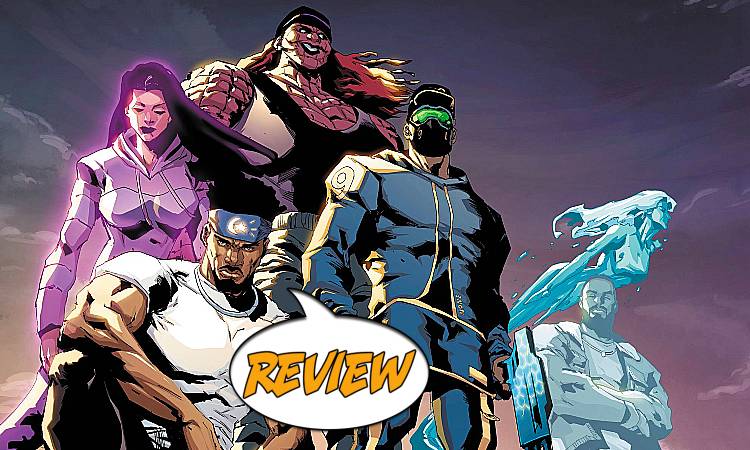 Tech-9 has assembled his crew, but are they up to the task of facing Holocaust? Your Major Spoilers review of Blood Syndicate: Season One #6 from Milestone Comics awaits!

Previously in Blood Syndicate: Season One: Wise Son and Tech-9 thought they’d left the war back in Sadaqah, but Holocaust has turned Paris Island into a war zone! Icon, Rocket, and Static aren’t coming to save the day; can our unlikely heroes save their neighborhood?

We open in the past, visiting a young Rolando Texador in the wake of a beating by local gang members. He pleads with his father to get him a gun. The answer is a firm, unbending “No,” which makes his super-power to create firearms out of thin air a bit ironic, at least in the Alanis Morissette sense. In the present, Rolando/Tech-9 and his makeshift team of Bang Babies make their assault on the Paris Island Bridge, facing down with the pyrokinetic monster called Holocaust. Things go well at first, but his crew begins to fall. First Fade, then Aquamaria, then Brick House, Boogieman, and Third Rail. When Tech-9 is killed by Holocaust, Flashback takes the initiative, flashing back in time to explain that the first plan has failed.

That’s when the Blood Syndicate goes to plan B.

The end of the issue is the most interesting part for me, as Tech-9 commandeers Holocaust’s video feed long enough to announce that Paris Island is now Blood Syndicate turf, gaining attention from the authorities and local heroes, Icon and Rocket. By the end of the issue and this miniseries, Earth-M’s Blood Syndicate is essentially where they were in their debut back in 1993. I’ve been a little uncomfortable with the slow burn of this mini (and, if I’m honest, most of the Season One Milestone material), but it’s a more successful ending than Hardware, Icon, or Static got. The art is also very strong, with ChrisCross giving some of the most expressive faces and body language I’ve seen in recent years. The redesigns look great in action, and the combat sequences really shine, especially Aquamaria vs. Holocaust, Round 2. It’s a really good-looking book.

Maybe I’m too cynical, but Blood Syndicate: Season One #6 is a good enough final chapter (and a good enough setup for more stories) that my worries about getting more Milestone are now doubled, with excellent art and a story that has built into something complex and meaningful (especially Tech-9’s declaration of intent for Paris Island), earning 4 out of 5 stars overall. I absolutely recommend this comic for those of you who read individual issues, but if you’re a trade waiter, snap this one up so that DC okays more Blood Syndicate ASAP.

An interesting relaunch comes to a successful close and I hope that we get more Blood Syndicate sooner rather than later, as the story and the art are both quite good.