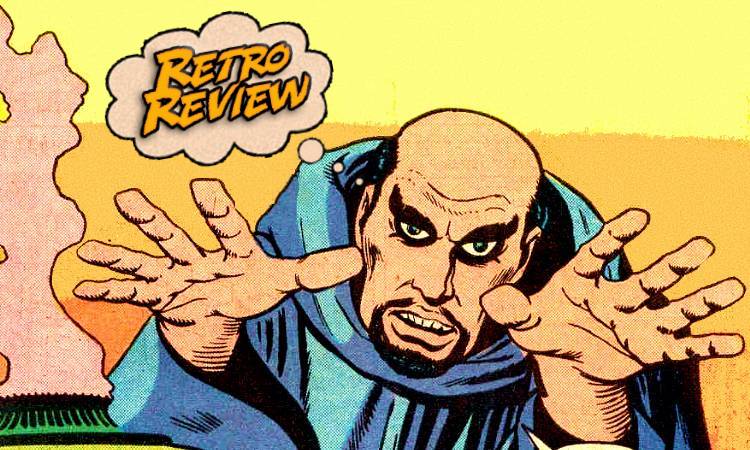 He’s often picked as the worst Avenger of all, but what do you REALLY know about Doctor Druid? Your Major Spoilers Retro Review of Amazing Adventures #1 awaits! Previously in Amazing Adventures: As the superhero trend waned after World War II, different comics companies tried different measures to stave off oblivion. Some turned to westerns, some invented romance comics, and a few doubled down on horror. But at Atlas Comics, the focus was on giant monsters and science fiction, with names like Titano, Groot, and Kragg ruling the roost. Indeed, this issue of Amazing Adventures kicks off with the story of Torr, a telepathic giant from another world brought to life by Jack Kirby and Dick Ayers. Five pages of Steve Ditko follow, bringing us to the part of the issue that is really memorable: Marvel’s first recurring superhero of the Silver Age! After hearing tales of a Tibetan lama whose health is failing, Dr. Droom decides to investigate, driven in part by an unsettling degree of fetishized orientalism. That’s not going to go away, by the by, including some insultingly retrograde imagery for which I apologize in advance. Arriving in Tibet, Droom is taken aback when informed that, to get to his patient, he has to walk across a bed of hot coals! The GorLion is actually an interesting visual metaphor for this issue’s art team, featuring Jack Kirby pencils and the inks of Steve Ditko. Though both men are heavyweights who created huge swaths of the Marvel Universe with nothing but their pencils, seeing them working together is uncommon, and the hybrid monster feels like half Jack/half Steve. That’s not a bad thing, though, as the art is very strong throughout the story. Dr. Droom escapes from the animal by climbing a levitated rope, to find the man he has come to heal. In some ways, this issue parallels the origin of fellow magician Doctor Strange, but instead of learning his trade from the ancient man in the proverbial high castle, Dr. Droom gets his powers from a transfusion of magic from the dying lama…

…and here’s where the story gets extremely uncomfortable. In gaining his powers, Doctor Druid is literally transformed to look Tibetan, described as “an appearance suitable” to his new role as magical trouble-shooter, taking the story from out-of-touch to racist in the space of a couple of panels. While I’m used to looking at old comics that haven’t aged well (Have you downloaded the latest Legion Clubhouse episode yet?), this one feels wrong even by 1961 standards. When this story was reprinted in the pages of Weird Wonder Tales fifteen years later, this sequence was substantially altered. In the strictest sense, that ’76 reprint is the actual first appearance of Dr. Anthony Druid, a change that not only improves his cache with a better alias, but avoids confusion with Fantastic Four villain Doctor Doom. On the other hand, the handful of ’60s Droom adventures are considered canonical to Doctor Druid, lasting through issue number six, when the book was retitled Amazing Adult Fantasy. That title stayed through issue #14, at which point they dropped the Fantasy and changed everything. The upshot of it all, though, is that even the strength of the art and the interesting core concept can’t keep me from cringing at Amazing Adventures #1‘s failings, earning 3 out of 5 stars overall.

That said, it doesn’t justify all the people who hate Doctor Druid for having the temerity to be chunky AND bald and still wear a costume. Those guys just suck.

Really impressive art can't overcome the unpleasant orientalism of the plot, but the bones of something good are here. The second take at making Anthony work goes much better.