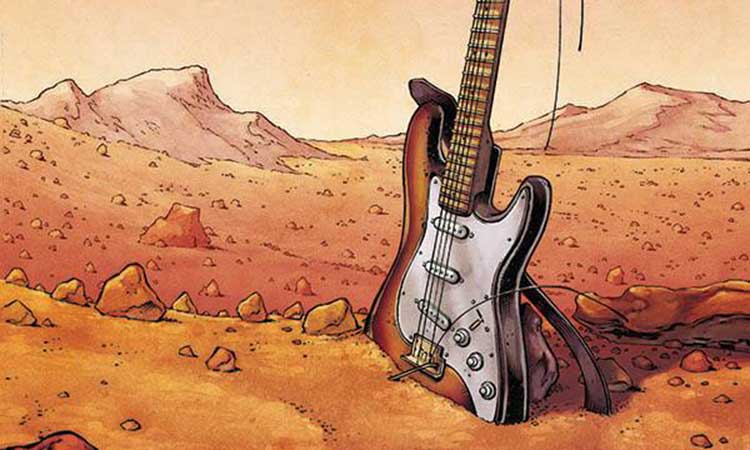 Roy will be the first person to ever set foot on Mars, and if it all goes to plan, he’ll be the first to die there as well. Your Major Spoilers review of Traveling To Mars #1 from ABLAZE Publishing, awaits!

Previously in Traveling To Mars: The planet Earth has nearly used up the last drop of its energy resources, but a new discovery on Mars sends the planet into a race to claim the red planet.

Traveling to Mars #1 opens with Roy Livingston onboard a space station preparing to take off for Mars.  He begins to tell his story of how he ended up on the space station and presumably the most famous person in the world. The rest of the issue is almost entirely a flashback showing how he was raised in a religious household with parents who didn’t expect much from him, to being an underachieving adult, to being diagnosed with an aggressive form of cancer, and due to this disease, being picked to man a mission to Mars to claim the planet for a corporation that specializes in imitation meat. Along the way, there’s a lot of pondering and philosophizing about regret and other aspects of life. Especially since it’s repeated over and over again that Roy is expected to die very shortly after arriving on Mars.

Traveling To Mars #1 makes a lot of promises, especially through its solicitation and if the series goes on to fulfill those, it’ll be a good series.  But in this first issue, it comes up short on delivering.  The entirety of the issue is essentially set up, which isn’t done in an effective way.  The whole issue is one big flashback that plays out like the scenes from Armageddon where the drillers are stuck at the space center, except without the fun hijinks.  There are some nice ruminations on life here that do have an authentic, downhome feel, with surprising nuggets of wisdom,  that isn’t unusual to hear from an undereducated, unsophisticated person.  But, these moments are coupled with an unbroken streak of ennui that makes them come off as monotonous, especially when visually, he’s almost entirely shown listlessly staring off into the distance.  While it’s a bit unfair to expect the first issue of a series to embody all the qualities that can come with a full run, the problem here is pacing.  This issue just spends too much time on backstory and drilling it into the readers’ heads that Roy is sad.

The art in Traveling To Mars #1 lends itself very nicely to the first person narrative that’s going on.  Early on we see Roy sketching into his notebook, the art in this issue then mirrors the look of these sketches, just with color.  This helps show how the story is now from the perspective of Roy and represents his particular take on reality.  Beyond the narrative qualities, the book has a good look, especially when it comes to Roy.  Seeing as the story is trying to drive home how haggard Roy is, the art does a good job in showing this on his face.  He has heavy eyes and deep facial lines that could tell the reader just what kind of man this is if the writing didn’t.

Traveling To Mars #1 tries very hard to introduce a sad character and then put them into an interesting situation, but ultimately wastes a lot of time trying to drive home the same point over and over again with diminishing results. Visually though, the issue has a lot going for it. 2.5 out of 5 stars.

Traveling To Mars #1 would’ve been better off as an FCBD introduction or a #0, but the focus on backstory without much else made this a bore to read.