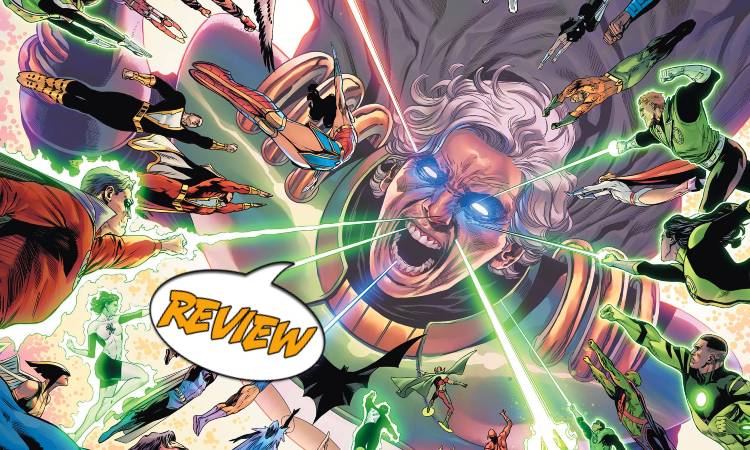 The Multiverse has been restored, but Pariah isn’t done with his plans. Can the young heroes of the DCU stave off a threat that felled their parents? Your Major Spoilers review of Dark Crisis On Infinite Earths #6 from DC Comics awaits!

Previously in Dark Crisis On Infinite Earths: War erupts as more heroes are taken at the hands of Pariah! The fate of the Multiverse depends on the young heroes of the DCU as they clash with Deathstroke and the Dark Army! Can the resurrected Justice League race home to Earth-Zero in time to join the fight… even if it could mean that not everyone gets to return?

And what dark powerhouse rises on the battlefield?

As the young heroes of the DC Universe swarm onto the battlefield, Pariah tries to explain to Deathstroke what led them to this moment, how the Great Darkness helped to soothe him when he was trapped in a terrible non-existence in the void. For his part, Deathstroke had thought that his part in the machine would finally free him from pain, but the arrival of Beast Boy to rip most of his face off quickly puts that lie to rest. Elsewhere, the entire Green Lantern Corps is absorbed into the darkness, while the Justice League is finally united in the new Infinite realities. As the battle rages, the legacy heroes struggle, until Superman Jon Kent leaps into action to fight off the Dark Army, engaging Pariah’s puppets directly, or as he survives it “A job for Superman!” Things look bad, as even Mister Terrific and Batman Luke Fox can’t figure out how to disable Pariah’s anti-matter cannon.

And then, thirty years after he pulled it off the first time, Doomsday is ready to kill another Superman.

The previous few issues of this book had all been on an upward trajectory, giving me hope that there was a light at the end of the tunnel. The ending of Dark Crisis on Infinite Earths #5 deflated much of that for me, and this issue doubled down on the problem. Not only did the sigh-inducing ending of the last issue not go anywhere, this issue is the point where you cannot understand what has happened by just reading the core series. The story hinges on three different moments of dramatic events in one of the crossover one-shots, and the dramatic reveal of a missing Justice Leaguer loses all its punch because of the lack of setup in this title. A dramatic arrival halfway through the issue is satisfying, and the art in that portion works quite well. The Beast Boy/Deathstroke fight is also dynamic, but much of the issue is just quick shots of an indistinct battlefield, and the big last page reveal falls flat due to some very odd proportions and layouts.

BOTTOM LINE: NOT THE ISSUE I HOPED FOR

The biggest problem with Dark Crisis On Infinite Earths #6 is the lack of important plot points and moments within the pages of this book, but the unrelenting darkness and overwhelming need to one-up the previous issues shock moments are also an issue, with art that can’t quite make up for the narrative breaks, earning a disappointed 2 out of 5 stars overall. I’m still interested in next issue’s big blowout, but less than I was last issue. Even worse, I feel like it’s not going to END so much as the transition into the next big crossover event, but at this point, there’s nothing to do but wait.

A disappointing follow-up that admits it isn't the complete story more than once and ends with a dramatic sting that falls flat. The art is okay, but we're officially off the rails.