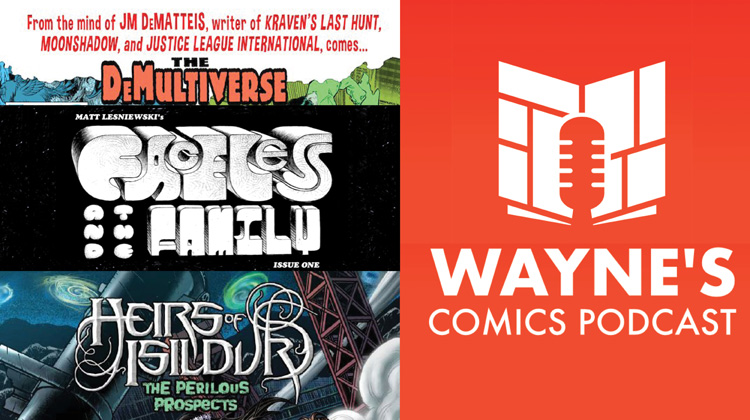 Episode #561 is a crowdfunding tripleheader, with JM DeMatteis, Matt Lesniewski, and Insymmetry Creations!

It all kicks off with comics legend JM DeMatteis, and he’s got a Kickstarter underway for his new “DeMultiverse!” He has FOUR new titles to support, including Layla in the Lands of After, Anyman, Godsend, and Wisdom! (Since this interview, he’s added a fifth–The Edward Gloom Mysteries!) We delve into each comic, then talk about his stellar career, including his work on Justice League and Ben Reilly, Spider-Man!  This Kickstarter will conclude on Thursday, November 10, at 11:58 a.m., so don’t miss it! His interview begins at 2:13.

Next is Eisner-nominated creator Matt Lesniewski, who has a Zoop.gg campaign going for Faceless and the Family! It’s described this way: “A sci-fi/post-apocalyptic journery where a strange and lovable group of misfits form a family! It will also end on November 10, so don’t wait! Support this campaign today! His discussion starts at 51:19.

Then everything wraps up with the return of the great team from Insymmetry Creations, Matt Knowles and Steph Cannon! Their Kickstarter for Heirs of Isildur: The Perilous Prospects Books l and ll will finish up on Thursday, November 10, at 9 p.m. ET! It’s described as “Apocalyptic sci-fi set in a Steampunk world. The catastrophe in Shadow’s Haven worsens because of the skies above and the citizens below!”  We discuss the series and what Matt and Steph are up to, always a fun discussion! Be sure to support their excellent comics! Their interview kicks off at 1:47:40.