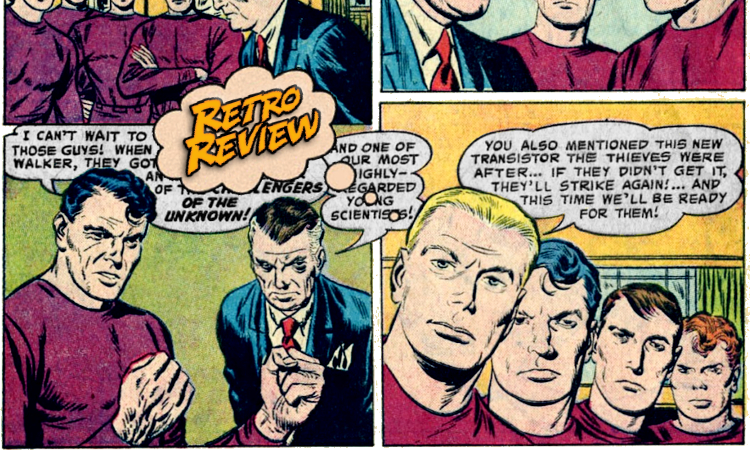 Four men living on borrowed time. But what will they do with their new lease? Your Major Spoilers Retro Review of Challengers of the Unknown #1 awaits! CHALLENGERS OF THE UNKNOWN #1

Previously in Challengers of the Unknown: Back at the dawn of the Silver Age of comics, things were different. A number one issue was considered something of a liability, as readers responded more positively to higher issue numbers. The newsstands and spinner racks featured many different genres, from westerns to romances to science fiction nonsense, and the one kind of comics that wasn’t a sure thing? Costumed superheroes. There were also a number of anthology books on the stands, many of which were used as trial balloons for ongoing series. I mention this because, full disclosure, I forgot that the first adventure of the Challengers did NOT take place in this issue, but in Showcase #6. (That’s only two issues after the debut of The Flash.) However, there is one interesting thing about this issue for me: It perfectly presages the Star Trek episode, The Squire of Gothos from season one. To wit, Rocky, Ace, Red, and Prof are dispatched to the site of a UFO landing. Captured by the strange alien beings, the Challengers awaken to find themselves trapped in a strange glass structure, tormented, poked, and prodded by their giant alien captor. Then, the team looks closely to find that the creature’s instruments looked less like scientific tools than… toys? The team on borrowed time finds themselves in a terrarium, kept as a novelty by a little boy from space, but when they pool their efforts to overturn their glass prison, an even more terrible threat presents itself. Because where there are children, there are house pets! Rocky, Red, and Prof Haley fight off the space kitty, while Ace lives up to his name by using the child’s giant alien “potato gun” to push the button on the wall. It’s the same button that the alien used to summon his parents earlier in the story, and when Ma and Pa Zorpdink arrive, they realize that their boy has been torturing small animals for fun. It is, after all, the first sign of a serial killer. Junior gets a dressing down, just as Trelane the Squire of Gothos does nearly a decade later for mistreating the crew of the Enterprise. While I’m sure that this sort of story point existed before TOS, I can’t find any stories using the “powerful alien is actually an immature infant” that predates this issue. It means that Jack Kirby, the writer/artist of the series, effortlessly created a trope that would carry a whole episode of one of the greatest science fiction shows ever. His art here is developing into the style that would launch Marvel’s big debut/resurgence (depending on which timeline of events you believe) in just a year or two, but the central quartet are all individually identifiable, despite their matching coveralls. Indeed, Challengers of the Unknown #1 shows off a team that has much in common with the Fantastic Four, with a big guy, a smart guy, a hotheaded kid, and a smart blond who is secretly the brains of the outfit, with a story that transcends its fifties sci-fi theremin music roots for 3.5 out of 5 stars overall.

I do regret that it’s not the team origin that I intended to review today, but in reading it, I was quite enthralled.

CHALLENGERS OF THE UNKNOWN #1

It's like watching the foundations of modern comics being designed in real time, and while the Challengers never really stuck, this issue makes it tough to see why.