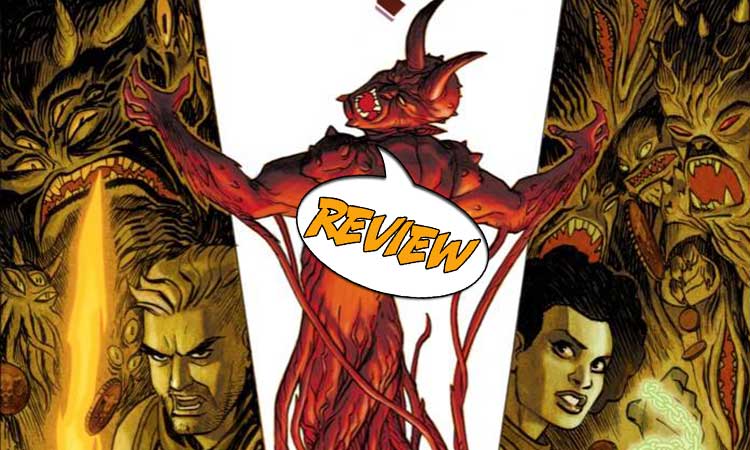 For fifteen years Maia and Sebastian have tracked down cursed coins from Hell. But when they find the last one, will they really be freed from their bargain with Shrouded College? Find out in Hell to Pay #1 from Image Comics!

Previously in Hell to Pay: Maia and Sebastian Stone have made a deal with the Shrouded College. The price – to find and recover 666 cursed coins. The end is almost in sight for them…

It takes a little time for Hell to Pay #1 to get rolling, but it is well worth the wait. It opens in a castle in Ireland where a man (Ian Macready) and a woman (Maia) converse about being rich in the cat-and-mouse way of one of them trying to seduce the other. Ian tries to impress her with his collection of mathematical theory from ancient times and with his cloned thylacine. She is not impressed.

Then we get to the meat of the plot, or at least the back story that sets it up. Hell, he says, is real. There are a couple of important points here. Hell has special coins used as currency, and they have periodic uprisings of the souls imprisoned there. The rebellion cycle repeats over time, but at one point, someone escaped, and they escaped with a sack of the coins, or Qurrakh, as they are known. And when those coins are spent in the human world, the course of human history changes its path.

Now that is an intriguing concept. We ponder that as Ian claims he has one such coin. But of course, he cannot actually show it to Maia because it would be far too dangerous, and we immediately hit a twist as Maia knocks him out with magic and radios to her husband Sebastian. He must get into the castle past the guards.

A flashback takes us to the Shrouded College four weeks previously. Maia and Sebastian have retrieved a Qurrakh, and by their master’s count, only one coin remains. If they can get it, their debt will be repaid, and they will finally be free. Then we jump to one week ago. Sebastian does not feel that they need to rush into finding the coin until Maia tells him that she is pregnant. We also get a brief flashback to fifteen years earlier. Sebastian and Maia were terribly wounded in an accident when someone from the Shrouded College approached them. Their deal involved healing these severe injuries.

Back at the castle, while Maia checks out an upstairs safe for the coin, Sebastian fights his way to a basement vault with a flaming sword. In the vault, he does find the coin suspended in a magical field. He must use the remaining power in his sword to work it free. Based on what else he finds in the vault, he sets the castle on fire as well.

So, they have the last coin and have covered their tracks. One might think this is the end of the story, but there is always room for another good twist…

The art of Hell to Pay #1 is solid and imaginative. The scenes from Hell are particularly interesting. Instead of only scenes of torment, we see scenes of commerce – buying and selling rare things between devils who come in a variety of appearances. The rebelling souls are distinctly human, and the battle is drawn in a grand scale even though it is brief. There is a little gore and some torture, as one might expect. I do really like the panel that shows the soul escaping while everyone else is otherwise distracted.

Sebastian and Maia are a couple, and they have some nice chemistry between them. They were quite young when the Shrouded College approached them, and they have been working together for fifteen years. Their work outfits are practical, and I like their design, although I do wonder where Maia was hiding her backpack in the opening sequence. Sebastian’s flaming sword is dramatic, and I also like that he cannot just take the coin he finds easily; he must sacrifice his sword as a tradeoff.

Once Hell to Pay #1 gets going, there is plenty of action and a solid setup to lead us further into the story. What is even more interesting is that there are plans for Shrouded College to be the center of different stories. In that case, I can forgive some of the extra time spent in world-building because there is an entire world to be built upon.

The Shrouded College offers magic – but at a very steep price!