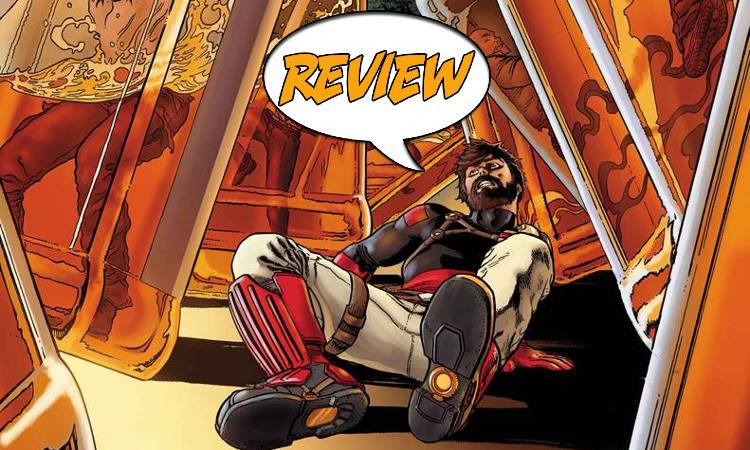 The multiversal Avengers are nearly complete. All they need is a Tony Stark. Too bad the one they have is stuck at the bottom of a bottle of whiskey. Your Major Spoilers review of Avengers Forever #10 from Marvel Comics awaits!

Previously in Avengers Forever: The pillars are in place. The most important Avengers from throughout the Multiverse have been assembled. All but one. A Tony Stark is needed. But the only one who’s available is a man the size of an ant who comes with a very large problem.

In the interdimensional Hellcharger, Deathlok, the All-Rider, and the Invincible Ant-Man prepare for the completion of their task. But there’s one more Pillar of The Avengers to be collected along with their Rogers, their Danverses, their Thor, and their Panther: They need a Tony Stark. Unfortunately, the Multiversal Masters have been stealing futures, which has been very hard on the Tonys of the universe. One is burned at the stake as a witch, another has given up his body to inhabit a giant form, and a third cannot bring himself to leave his cave and his box of scraps until his armor is absolutely perfect. It’s an endless array of broken heroes, and Tony “Ant-Man” Stark is very much unhappy with the situation. Deathlok hints more than once that their quest could be much shorter if Stark just put down his bottles, but it takes the most unexpected Stark of them all to drive that message home.

I was confused by the solicitation for this issue claiming that the team still needed a Tony while Ant-Man is already in play, but the execution made much more sense. Invincible Ant-Man slowly realizing that his alternate selves are more broken than most heroes makes the issue’s expected ending feel earned, and the final pages allow him to do more than just watch “himself” suffer. The glimpses of life in the Hell-Charger are also engaging, especially given the framing of the last few issues. Towe’s art has a lot going for it (his Ghost Rider faces are terrifying, reminding us that Robbie Reyes doesn’t live here anymore), but it’s the emotions of the various Tony Starks we meet that make the story really sing. As the issue ends, Ant-Man and his other selves have met to share and talk about their problems, which reminds us why he’s the Ultimate Stark.

BOTTOM LINE: THE SORBET TO CLEAR THE PALATE

Of course, the whole idea of “Ultimate” anything bothers me in this context, but Avengers Forever #10 manages to get past the question of why the originals as created by Lee and Kirby aren’t the Prime versions, giving us a look into the psyche of Tony Stark(s) with art that is as comfortable with a flying muscle car from hell as it is a 12-step meeting, wrapping up into a better-than-average 3.5 out of 5 stars overall.

While I'm annoyed at the concept of The Pillars, the execution here is top-notch, and the art makes up for a multitude of sins, making us feel for every single alt-Tony we encounter.