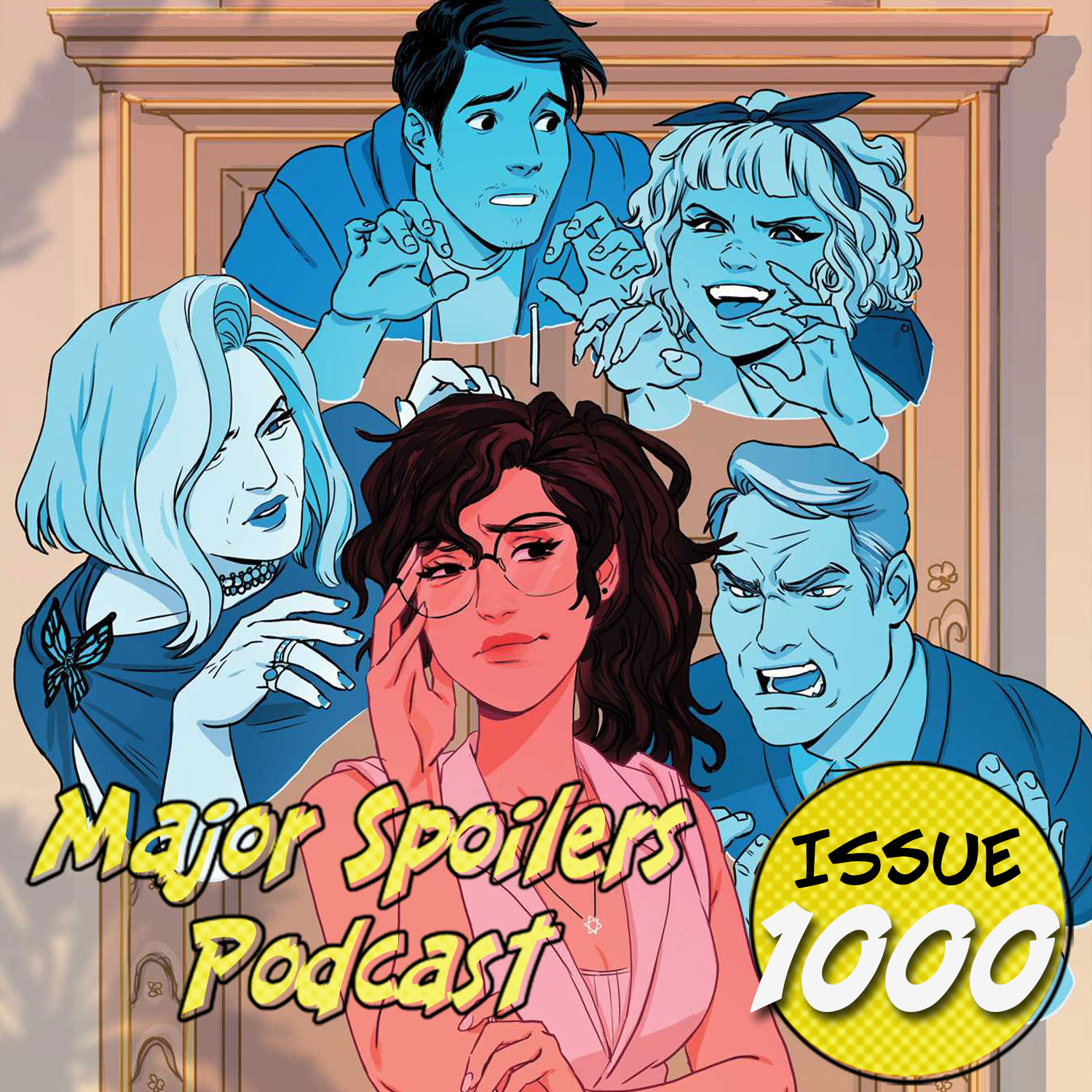 Major Spoilers Podcast #1000: Ghosted in LA (and Ghostbusters too!)

Scott Johnson is here to help us celebrate 1000 episodes of the Major Spoilers Podcast, and we do it in the most Major Spoilers way! Plus we review, Ghosted in LA Volume 1, Barbarian, Traveling to Mars #1, New Champion of Shazam! #3, and Vampirella vs. Red Sonja #1.

” The Witcher” has been renewed for a fourth season by Netflix, though the hit fantasy series will be missing one familiar face. Henry Cavill will exit the production after the upcoming third season debuts, with Liam Hemsworth set to take over the lead role of Geralt of Rivia.

After writing and producing the first two "Venom" movies, Kelly Marcel has been tapped to direct the upcoming third movie for Sony Pictures. The project is still in early development, but star Tom Hardy is set to return as the lethal protector Venom, one of Sony's slate of Marvel characters.

STEPHEN
Vampirella vs. Red Sonja #1
Writer: Dan Abnett
Artist: Alessandro Ranaldi
Publisher: Dynamite Entertainment
Cover Price: $3.99
Release Date: November 2, 2022
It's a monumental clash of titans that had to happen, from master storyteller Dan Abnett! Both Vampirella and Red Sonja were recruited by the Project, a cosmic collection of superheroes sworn to protect all known universes. But Vampirella is now considered a murderous criminal - and she's capable of defeating any hero. Unfortunately for her, Red Sonja is no hero... It's a universe-spanning, action-packed battle royal from start to finish, by Dan Abnett (Dejah Thoris) and Alessandro Ranaldi (Jennifer Blood)!

You can purchase this issue via our Amazon affiliate link - https://amzn.to/3sJJvMo

MATTHEW
NEW CHAMPION OF SHAZAM! #3
Writer: Josie Campbell
Artist: Evan "Doc" Shaner
Publisher: DC Comics
Cover Price: $3.99
Release Date: November 1, 2022
Don't read the comments! After a disastrous outing as Shazam, Mary is the laughingstock of the internet. Will she ever be taken seriously? Now it's up to her to ignore the haters and help those who really need her. The missing-persons problem in Philly has only gotten worse, and our hero is running out of time to find the culprit behind it!

You can purchase this issue via our Amazon affiliate link - https://amzn.to/3TXxXRG

RODRIGO
TRAVELING TO MARS #1
Writer: Mark Russell
Artist: Roberto Meli
Publisher: Ablaze Publishing
Cover Price: $3.99
Release Date: November 9, 2022
From two-time Eisner and Harvey Award nominee Mark Russell and hot new talent Roberto Meli comes a compelling new sci-fi series...
Traveling to Mars tells the story of former pet store manager Roy Livingston, the first human to ever set foot on Mars. Roy was chosen for this unlikely mission for one simple reason: he is terminally ill and therefore has no expectation of returning. Roy is joined on his mission to Mars by Leopold and Albert, two Mars rovers equipped with artificial intelligence, who look upon the dying pet store manager as a sort of god. Against the backdrop of not only his waning days but those of human civilization as well, Roy has ample time to think about where things went wrong for both of them and what it means to be a dying god.
A riveting story of planetary exploration and of finding meaning in your final days.

You can purchase this issue via our Amazon affiliate link - https://amzn.to/3FBBoZK

SCOTT
BARBARIAN
Writer: Zach Cregger
Dirctor: Zach Cregger
Stars: Gorgiana Campbell, Bill Skarsgard, Justin Long
Release Date: 2022
In town for a job interview, a young woman arrives at her Airbnb rental late at night only to find that the house has been mistakenly double-booked and a strange man is already staying there. Against her better judgment, she decides to stay the night anyway, but soon discovers that there is much more to be afraid of in the house than the other house guest.

GHOSTED IN LA VOLUME 1
Writer: Sina Grace
Artist: Siobhan Keenan
Publisher: BOOM! Studios
Release Date: April 14, 2020
In Los Angeles, finding an apartment is killer—unless you live with the dead. Daphne Walters moves to Los Angeles for her boyfriend Ronnie, ready to live her happily ever after. But when happily ever after turns into happily for a month, she’s stuck in a strange city with no friends, family, or prospects for fun. Desperate to escape the lingering ghost of Ronnie’s presence everywhere, Daphne sets out to explore the city—and ends up encountering ghosts of a more literal kind! Rycroft Manor is abandoned, beautiful, and haunted. Will the dead be able to help Daphne find the life she’s been missing in the big city? From GLAAD Award-nominated Sina Grace (Iceman) and illustrator Siobhan Keenan (Jem and the Holograms) comes a story about learning how to make friends, find love, and live life to the fullest with a little help from some friends whose lives didn't end at death. Collects Ghosted In L.A #1-4.
CLOSE
Contact us at podcast@majorspoilers.com