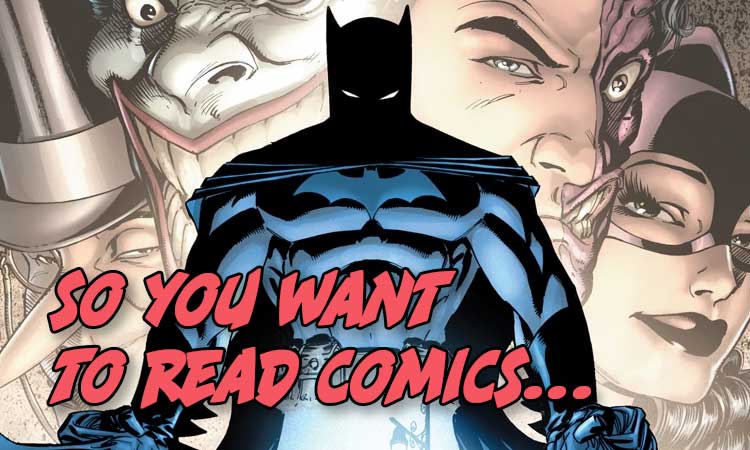 So You Want To Read Comics: Gotham Knights Edition

Batman’s dead in this week’s “So You Want To Read Comics.”  This is our weekly feature where we take a look at a single topic or genre, then give you two comic book recommendations, perfect for new readers, based on that topic or genre.  This week we’re looking at comics for fans of the new video game release Gotham Knights.

Released on October 21st, 2022, Gotham Knights lets players take on the role of one of four Gotham City vigilantes as they try and investigate the death of Batman, as well as pick up the pieces left in his absence.  While the gameplay has been met with mixed reviews so far, the storylines and characterizations have received mostly positive reviews.  What starts out as a straightforward investigation into the mysterious Court of Owls, soon splinters off in multiple directions as each hero as well as villain, tries to define themselves in a world without The Caped Crusader, in at times, heartbreaking and surprising ways.

So for those who enjoyed the story in Gotham Knights, here are a couple of comic books that will scratch that same itch and are easily accessible for new readers.

In 2011, DC Comics made an attempt to revamp its entire lineup by essentially rebooting its entire universe and starting the continuity over.  Much like Gotham Knights, the move was pretty divisive amongst fans and people still debate about the faults and merits of the move.  One title though is widely considered the best of the bunch and that was Batman, especially its opening story arc: The Court of Owls.  In this story, Bruce Wayne discovers that a secret cabal of ultra-wealthy Gotham citizens has been pulling the strings and controlling the city for centuries and he happens to fall into their crosshairs.  The story is praised for one, introducing a new threat to the Batman mythos, but also for examining the class divide in Gotham and what is stronger, wealth or fists.  There are also plenty of cameos from other members of Batman’s family of crime fighters as well, which makes for a nice way to branch off into more titles. This story is actually part of the inspiration for some of the stories in Gotham Knights, so if you enjoyed that, this will be a nice introduction to the world of comics.  In addition to this volume, I would recommend picking up Night of The Owls, which is a follow-up to this that focuses more on characters like Nightwing, Catwoman, and others from Batman’s “Bat-family.”

Whatever Happened To The Caped Crusader

As the marketing for Gotham Knights kept reminding us, Batman is dead.  Well, believe it or not, video games aren’t the only place where Batman has bit the bullet, he’s had his fair share of dirt naps in the comic books too.  One of the most famous was at the end of an event called Final Crisis. That’s where this comic comes in.  Written by Neil Gaiman, who’s most well-known in the comics industry as the writer of The Sandman,  This collection is his metaphorical funeral being held by the various villains who have fought with him over the years.  They each explain how they killed Batman and as a result reveal a piece of truth about their relationship with Batman. It’s an interesting way to dissect a character by forcing the characters who should hate him the most, treat him with a twisted sort of love and respect.  These are themes that pop up in Gotham Knights, as the team comes across more and more villains, they also learn about how Batman maintained connections and relationships with his rogue’s gallery that went beyond simply bad guy vs. good guy.  While there are some ties and references to other story arcs and old Batman lore, this collection works pretty well on its own, especially as a character exploration piece.

Have you played Gotham Knights and what do you think of it? Do you have any recommendations of your own?  Let us know in the comments section.