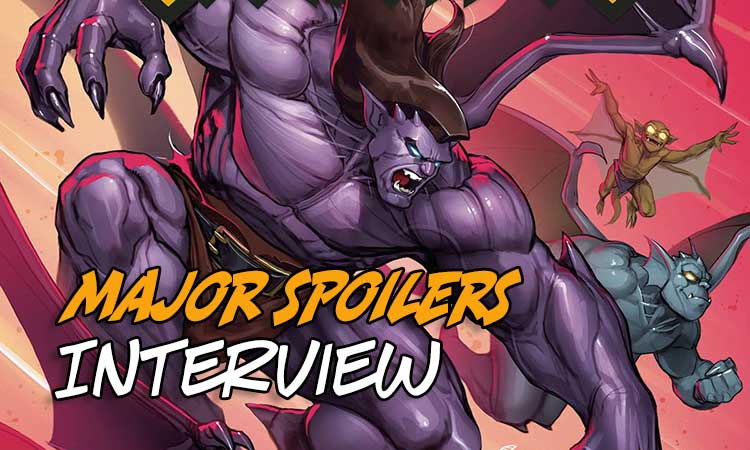 Dynamite Entertainment is launching a new Gargoyles series that is slated to arrive in December 2022, and ahead of the big release, Rodrigo Lopez had a chance to talk with series writer Greg Weisman about what we can expect. For those not familiar with the Disney animated series, here’s a quick rundown on what you need to know.

One thousand years ago, superstition and the sword ruled. It was a time of darkness. It was a world of fear. It was THE AGE OF GARGOYLES. Stone by day, Warriors by night, they were betrayed by the humans they had sworn to protect…frozen in stone by a magic spell for a thousand years. Now, here in Manhattan, the spell is broken, and they live again! They are Defenders of the Night! THEY ARE GARGOYLES! RODRIGO LOPEZ: Gargoyles is almost 30 years old, what is it about this property that continues to excite fans today?

GREG WEISMAN: Well, you probably need to ask the fans, I suppose. But I hope they still love these characters, love the world we created, and are excited to see more stories set in that world, featuring those characters. It’s all very archetypal, and yet was, for it’s time, quite fresh. Hopefully, we can recapture all that.

RL: On the flip side of that, what about Gargoyles needs to change to exist in 2022?

GW: Nothing. We just want to do more. We also want this to be an opportunity for new fans to find and fall in love with the property. So this new series won’t assume that everyone reading has an encyclopedic knowledge of every episode or past comic book issue. We’ll reintroduce every concept from the series – as needed, when needed – and hope that we hook ’em! RL: Will these stories be written with Gargoyles’ current audience in mind, or will they be aimed at potential new fans?

RL: Gargoyles has a huge cast, who will this series focus on?

GW: The huge cast. But this first arc focuses on the Manhattan Clan: Golliath, Elisa Maza, Hudson, Brooklyn, Lexington, Broadway, Angela, Bronx, and newer members, Coldfire, Coldstone, Katana, Gnash, Fu-Dog, and Eggwardo. I know that seems like a lot already – and it is. But each issue puts a spotlight on a different character, and we’ll get to know them again – or for the first time, if you’re a new fan – gradually.

RL: Will this run bring the Gargoyles universe to a close?

GW: Hell, no. With Gargoyles, it’s never the end. I have stories that go through the year 2199, at least.

RL: Assuming you were able to control them, which would you rather have right now? The Phoenix Gate, The Eye of Odin, or the Grimorum?

GW: Dude, I’d be afraid to use any of those! But I wouldn’t mind having Hudson’s Sword…