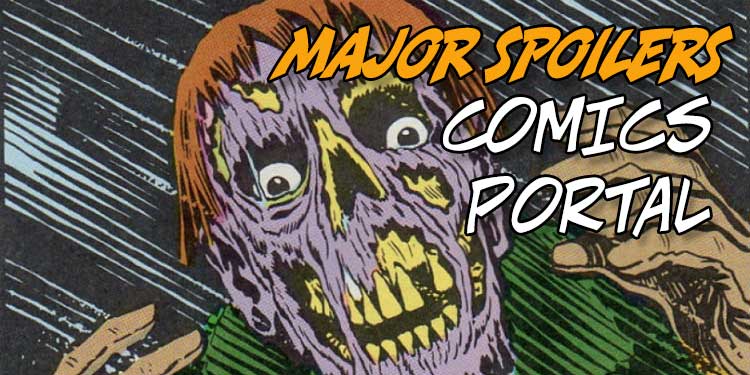 Today is Halloween, and it’s one of the best times to talk about horror in comics! When it comes to horror, comics are really one of the most effective storytellers around!

There are plenty of reasons why this is true! For instance, reading comics takes a strong imagination to fill in the gaps between the stationary images in each panel. When we “dive into” a comic story (as Frank Miller did with Batman so long ago), it’s often a part of us because we engage so strongly!

I’ve often talked in this column about the fact that Marvel and DC pretty much have a stranglehold on superheroes, so most other comics companies turn to horror to make a living.

Image has been a good example of this. Who among us has NOT read The Walking Dead or watched the AMC show based on the comic? That company also makes Gideon Falls by Jeff Lemire and Regression by Cullen Bunn. Then, too, Scott Snyder printed Wytches at Image as well.

Vault Comics has made The Rush, a chilling horror western, and recently released West of Sundown from Tim Seeley and Aaron Campbell.

I thought, in honor of Halloween, that I would talk about the scariest stuff I’ve ever read in comics! Way back in Omega Men #3 from DC Comics was an event that frightened me the most!

In “Assault on Euphorix,” Kalista, a female member of the group, has been captured and interrogated with no results. In order to take all she is and turn it to something of use to the bad guys, she is exposed to the Greeshagurt, a telepathic creature that can absorb her features, her knowledge, and her memories, making it all available to them. She would exchange forms with it, making her a shapeless blob for the rest of her existence.

The “Omega Woman” screams loudly during what was obviously a very painful process, something that haunts me to this day. And that’s how the issue ended. I literally counted the days until Omega Men #4 to find out what happened next!

I have to give credit to Roger Slifer, the writer of that issue. That was horror in its purest form! Not only would she be destroyed on every level, but all she ever could be instead would be used by the baddies!

It was the worst possible thing that could ever happen to a hero, in my estimation! Like I said, it still gives me chills every time I remember it! I do see some similarities between the Greeshagurt and the alien symbiote in Spider-Man. A telepathic alien that bonds with a human Peter Parker? Yeah, that’s not good!

Again, I have to give credit to the creative team who came up with the symbiote. The slow process that reveals to us just what was going on really scared me.

Peter is actually wearing the symbiote as a black costume. It’s giving him more strength, more endurance, and more abilities. He doesn’t need as much (if any) sleep, and Peter is not his usual analytic self while all this is going on.

When he does figure it out, it’s terrifying! Actually having physical contact with a telepathic shapeshifter that was growing stronger as a result? Yikes, that’s horrible!

Then, of course, the symbiote bonds with someone else, remembering all it learned from Peter. The two become Venom, bent on punishing Spider-Man as a hero and as a person. He’s much more powerful than Spidey, and he’s got the knowledge and the ability to hurt him!

Recently, the symbiote has bonded with Eddie Brock’s son, Dylan. And it’s still up to no good! Cah-reepy! I think it’s worth mentioning Batman while we’re discussing horror.

The Dark Knight actually takes many of the elements that horrific baddies often use and turns them against the evildoers.

He’s most at home in the darkness, he’s scary to the criminals, and he seems to be more than human, taking on the villains who should beat him into a pulp and winning!

Because of all this, I actually admire Batman! He’s smart, he plans ahead, he can take on even Superman-level enemies… and defeat them!

Scary? Yes, especially to the villains. Turning their strengths against them? THAT I can appreciate!

What do you think? What have been the scariest moments you’ve read in comics? What comics characters scare you the most? Are there horror comics that you enjoy? Whatever your opinions, be sure to share your thoughts below!