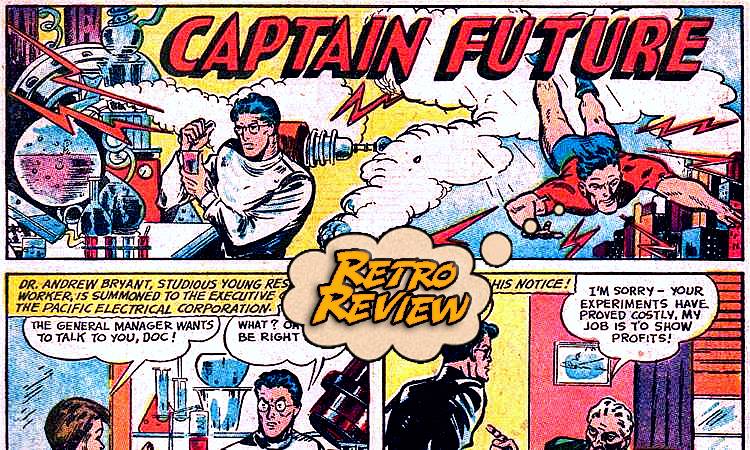 He’s the OTHER Man of Tomorrow, and his pedigree involves pulp comics legend Edmond Hamilton… sort of? Your Major Spoilers Retro Review of Startling Comics #1awaits! Previously in Startling Comics: The story of Captain Future starts in 1939, with the first World Science Fiction Convention, as creators Mort Weisinger and Leo Margulies put their heads together to create a new pulp hero. The adventures of that Captain Future appeared in Better Publishing magazines, both his own eponymous title written primarily by science fiction legend Edmund Hamilton and in the pages of Startling Stories. But Better’s Editor-In-Chief Ned Pines also had a comic book publishing line, so a few months later, Better (AKA Standard Comics AKA Pines Comics AKA Nedor Comics) brought Cap into the four-color world of comic books. Meet Andrew Bryant! A scientist working on exciting new shortwave broadcasting technology, Andrew is angry to find that he’s being downsized, and foolishly decides to experiment with infrared and gamma-ray emissions at the same time. The resulting explosion is no surprise, but his resulting superpowers are, as the unexpected combination of radiations energized his body and made him durable, super-strong, and able to emit electrical energy bursts from his hands. He also gains enhanced hearing that allows him to discover that one of his coworkers is up to no good. All he needs is… a costume! Though pulp hero Captain Future is one of those space-suit-bubble-helmet kind of guys, Captain Andrew Future emulates the new hotness with a Superman-inspired red shirt and blue trunks, and his footwear consists of loose-fitting, pointy-toed elf boots, almost like those Robin adopted just a few months earlier. (A quick Google search indicates that they’re called “winklepickers” and that’s just delightful.) Though Captain Future looks very much like you’d expect a generic 1940 superhero to look, this adventure is somewhat more realistic, as the police take one look at his costume and throw him in jail, ignoring his pleas of a criminal conspiracy to steal a shipment of gold from a nearby harbor. Honestly, this issue is remarkably forward-thinking, as Cap’s electrical powers allow him to intercept radio and TV transmissions, leading him to the villainous Purple Plague, the mind behind the whole affair. Even the art, while somewhat generic, never falls below the level of “pretty okay,” especially by Golden Age standards. The Captain is clearly in a Superman mold (as is fellow hero Doc Strange, whose short pants likely necessitated Captain Future’s gym shorts), and so artist Kin Platt seems to be working in a Joe Shuster style. Unfortunately, a random electrical storm removes his powers and leaves him in the custody of the mysterious Followers of the Purple Plague. Once his powers return, Captain Future is more than up to the challenge of an evil cult leader with a few defensive robots. After stuffing a ton of incident and exposition into the first 9 pages, Captain Future wraps his debut up with a big-time action sequence and a literal bang! Having saved the gold, defeated the Purple Plague, and shown himself to be a real hero, Andrew Bryant can’t resist getting in one last parting shot at the policeman who arrested him earlier in the issue, showing that he’s not exactly a paragon of virtue, despite his requisite to punch evil. Later issues will reveal that Captain Future has to periodically recharge his powers with additional radiation, adding in his detective girlfriend who alerts him to criminals, and continuing to move him away from the pulp space hero that inspired him. All told, Startling Comics #1 is a solid but not stunning comics book (this lead feature is the best written and drawn of the eight features within), but it’s also clear from the generic trappings, costume, and powers why he lost his cover feature status with issue number nine, working out to a slightly-above-average 3 out of 5 stars overall.

The cover character arrives in a pretty good story with pretty good art, explaining how he lasted for another four years in comics, and also why he hasn't been revived as often as some of his heroic cohorts.