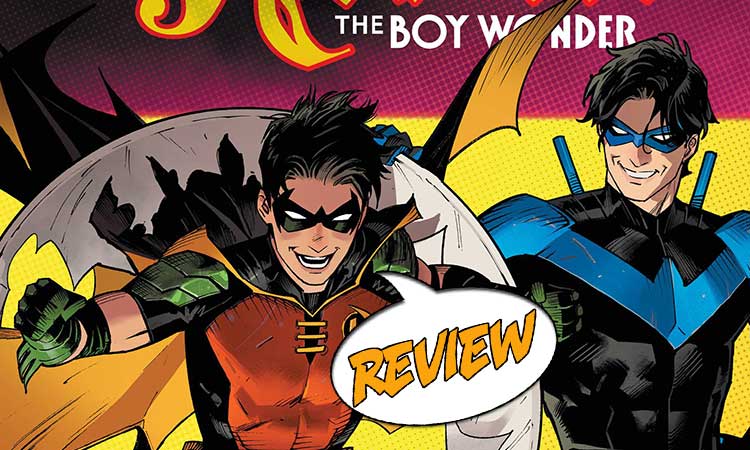 The hunt for a murderer continues, but it won’t be easy when the city thinks Tim’s a criminal.  Your Major Spoilers review of Tim Drake: Robin #2, awaits!

Previously in Tim Drake: Robin: Tim has broken away from Batman to stake out his own corner of Gotham City, but a murderer has decided to target him for some mysterious plot.

QUICKLY, TO THE LIBRARY!

Tim Drake: Robin #2 opens up with Tim trying to convince his boyfriend to leave town for a few days due to possibly being in danger.  During the argument, they overhear a news report stating that Robin has stolen a diamond.  Tim goes to investigate the scene and after uncovering a plethora of clues, discovers that he’s being led to the library.  Sparrow joins Robin and the two head to the library to continue their investigation, while there the unknown villain strikes again, and once again, Robin is framed for the crime.  The next day, Tim pieces everything together and goes to follow up on his hunch.  But, while trying to put it all to an end, he’s attacked by a threat he never could have predicted.

A LOVE LETTER TO DETECTIVE STORIES

Tim Drake: Robin #2 is first and foremost a good detective story in its own right.  Secondly, it’s a good-spirited homage to some of the most famous detective stories of the past.  Among many well-done aspects of this issue, is how the focus is put on Tim’s ability to examine crime scenes as well as his knowledge of detective literature.  It makes it so that when the “eureka” moment happens, it doesn’t feel out of place or convenient, it seems like a logical conclusion.  In addition to this, Megan Fitzmartin puts a unique spin on the traditional “secret identity to protect loved ones” trope by tying the idea of Tim revealing his secret identity to his boyfriend not just to his safety, but to how serious their relationship is, as if telling Bernard he’s Robin is the same as moving in together.  It allows Tim to be somewhat selfish but in an understandable way.  There is one bit of awkwardness in this story and it comes in the form of a fairly gruesome crime that is basically brushed aside once Robin finds a clue.  The way it all plays out takes a lot of the impact away from the act and makes any sort of pathos that Tim has about it feel disingenuous.

The art in this series so far is not going to be for everyone.  But, the use of the art to help tell the story is superb.  In one particular scene, as Robin and Sparrow are going through books from different crime authors, they are shown to take on the appearance of being in a scene from one of those books.  It’s a clever way to not only show the differences in the authors they’re reading, but also adds a nice touch of flair to the issue without distracting too much from the story.

With the exception of one questionable scene, Tim Drake: Robin #2 is an enjoyable detective story that plays into its characters main strengths in a way that doesn’t feel cheap or convenient.  It also happens to have more than a few fun visual flourishes to give itself a unique identity.  4 out of 5 stars.

Tim Drake: Robin #2 lures in readers with a distinct and vivid look, then hits them with a wonderfully constructed detective story.